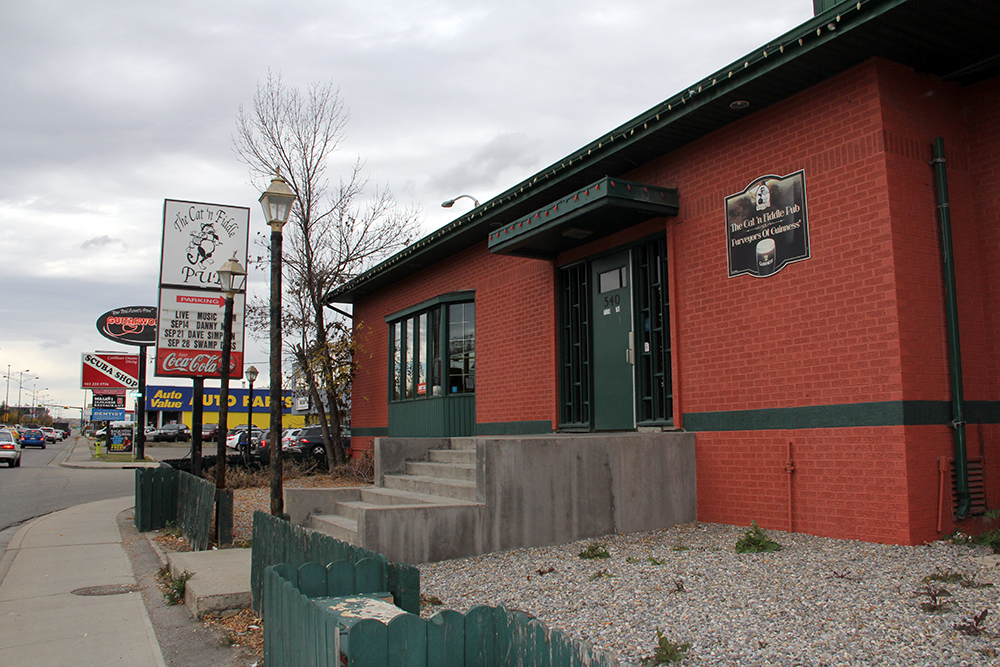 When you walk into the Cat ‘n Fiddle Pub, it isn’t obvious that it spent nearly four decades as a funeral parlour. Most remnants of its mid-century function have been replaced by the curios and sports memorabilia that adorn the walls. Converted to a pub in 1992, the building has seen plenty of life in more than 60 years. But it’s the death that has contributed to stories of the ghostly patrons that supposedly haunt the Cat ‘n Fiddle to this day.

“It was a crematorium too, so there were actually bodies dealt with in the building,” says Todd Carpenter, the pub’s general manager. “I guess that’s where the ghosts come from.”

Many have searched the Cat ‘n Fiddle for evidence of spirits, from psychics and ghost-hunters to a ghost-seeking dog. Resident ghosts are said to include a woman in a red dress and a biker who revs his motorcycle up and down the bar.

The Cat ‘n Fiddle Pub is at the intersection of 16th Avenue and 5th Street N.W. The panelled windows beside the door are reminiscent of stained glass from when the building was a chapel.

Go down a steep, narrow, low-ceilinged stairwell (terrifying enough even without the ghosts) and you’ll find the office and liquor room, which used to be the embalming room. The pipes and drains that were once used for washing bodies are still visible, as is the elevator shaft through which ashes were transported up to the main floor.

The basement is straight out of a horror movie, so it’s no surprise that spooky stories persist. By all accounts, the ghosts are harmless, though quite protective of the pub and its staff. Gabby Finkbiner worked at the Cat ‘n Fiddle for nearly eight years. She and Carpenter remember some of the best stories from its haunted history.

The story of the perfumed woman

A kitchen manager was skeptical of the ghost stories. One day, he thought he saw one of the pub’s owners in the basement, wearing a pretty red dress. “He said, ‘hi Jean, how are you doing?'” says Finkbiner. “But she didn’t answer. And then when he went upstairs, he ran into Jean again.” When the manager asked her if she hadn’t just been in the basement, she responded that she’d been upstairs all morning. “The psychics think the woman in the red dress was the funeral director, which is why she’s always down where the embalming rooms were,” Finkbiner says. “She always smells like lavender, so that’s how you know where she is.”

The story of the frightened robber

“A guy broke in here one day and he was ransacking the place,” recalls Carpenter. “He looked in the mirror and he could see something behind him. It scared the crap out of him, and he took off. So the ghost actually saved the place from being robbed.” Finkbiner adds, “The old general manager saw it happen, and it was caught on camera. It’s just these two orbs chasing after the robber. We think that was John, the biker.”

The story of the changing channels

“When I first started, I would push the button over and over and the TVs wouldn’t turn on,” says Finkbiner. When she asked the manager at the time to replace them, the manager replied, “It’s not the TVs, it’s the ghost. He’ll turn them on when he wants to.” Finkbiner didn’t buy it, but then the TVs suddenly lit up. They’ve also been known to change channels on their own. “We’d have Super Bowl Sundays, and everyone would be watching,” Finkbiner says. “It’s third down, everyone’s excited, they needed the point to win the game-and all of a sudden the TVs would change to SpongeBob.”

The story of the vanishing man

A man wearing a top hat and tails is said to haunt the men’s bathroom, an addition that wasn’t part of the original building. Unlike John the biker, this man hasn’t been given a name, but he has been seen several times. “Once, someone was using the bathroom and this guy was standing beside him,” says Carpenter. The patron came out of the bathroom stunned and claiming that the man beside him had walked straight through the wall.

The story of the flying glass

When she first started working at the pub, Finkbiner didn’t believe the ghost stories. “I thought, it’s just an old building with a creepy history,” she says. “There’s nothing here.” The previous owner suggested that Finkbiner say hello to the ghosts in the mornings. “For a while I’d say hello as I went into the basement, feeling like an idiot and completely aware of how ridiculous I sounded,” says Finkbiner. “No one ever answered.” One day, while they were standing beside a rack of wine glasses, the owner asked Finkbiner if she believed in the ghosts. “As I said, ‘No, Jean, I don’t believe,’ a glass flew two feet off the rack. And Jean smiled and asked, ‘Are you sure?'”