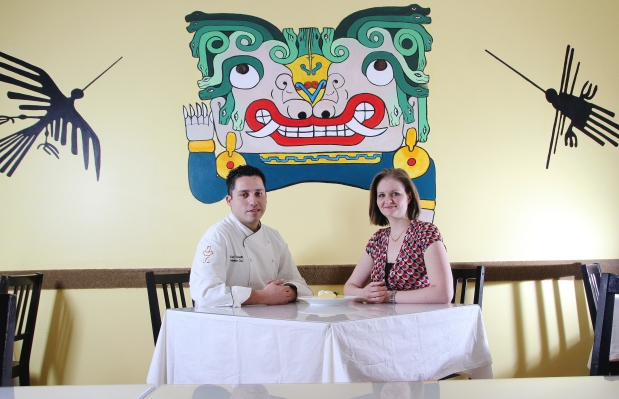 Hans Puccinelli, the owner of Inti, shares more information on what pisco is, when Peruvians will traditionally drink it and why Calgarians need to try it.

Pisco is a grape brandy produced in the winemaking regions of both Peru and Chile. The brandy, which ranges from amber to colourless, was developed by Spanish settlers in the 16th century in Peru, and in the 18th century in Chile. Pure pisco is quite thick, similar to vodka or Sambuca.

Hans and his wife at Inti. Photo courtesy of Cuisine and Chateau.

We’re a city of beer lovers, but pisco is a unique liquor that adds some oomph to tasty cocktails. Puccinelli says, “Pisco has a unique aroma and flavour that adds an exotic twist to the cocktails that I believe many Calgarians would enjoy.”

Puccinelli explains that Pisco Sours are most commonly enjoyed for special occasions such as weddings, birthdays and National Pisco Sour Day, which takes place on the first Saturday in February.

Puccinelli adds, “Pisco has also become a household alcohol used as frequently as a rum or vodka.” And, of course, it’s consumed on National Pisco Day as well, which is celebrated on the fourth Sunday in July each year.

Puccinelli will be serving four authentic cocktails at the restaurant’s tasting event, all of which he taught himself to make. Using a basic recipe, Puccinelli played with the ratios until “we found a drink that satisfied our palates.”

The must-try four cocktails available are:

This cocktail contains pisco, simple syrup, fresh lime huice and eggs whites. It’s shaken well with ice and then strained into a glass. The Peruvian Style Pisco Sour is topped with cinnamon and bitters.

This cocktail is an Inti Restaurant Special. The cocktail contains pisco, a special purple corn syrup, fresh lime and egg white. The drink is shaken well with ice and then topped off with a Peruvian soda called Inca Kola.

This delicious cocktail is perfect for dessert. This Peruvian cocktail is made from pisco, horchata and dulce de leche.

This final cocktail available at the evening’s tasting is a twist on the mojito. The cocktail contains pisco, lime juice and ginger ale. Topped off with ice, fresh mint and lime, the piscojito is a refreshing way to end the Monday evening.

The evening at Inti is truly an opportunity to embark on a culinary adventure. As well as delightful Peruvian cocktails, sample 10 different hot and cold Peruvian dishes. Just a few of the appetizers at the event are Choritos a la Chalaca (steamed green shell musels), Chicharron con Yuca (fried yucca paired with crispy pork belly) and Causa la Reina (rolls stuffed with a black mint chicken salad).

Puccinelli’s favourite dish? “Personally, I enjoy pairing a pisco drink with a plate of anticuchos (Beef heart skewers), or ceviche.”