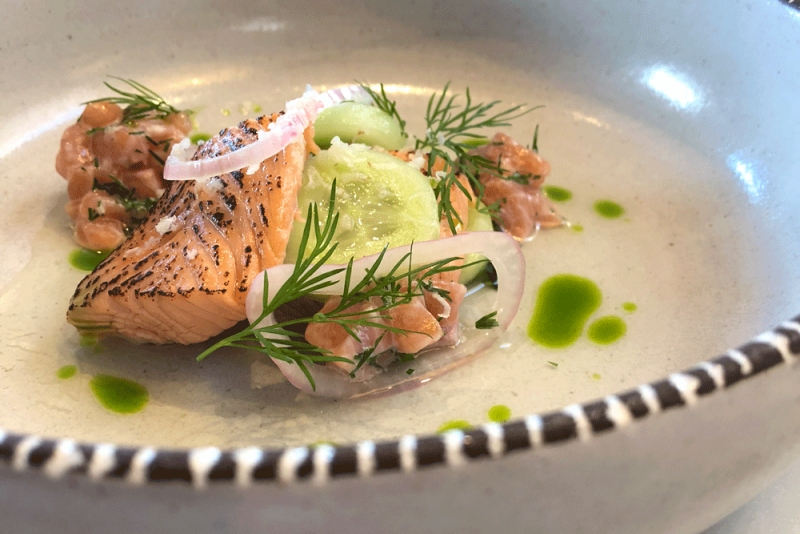 This dish with torched artic char with char tartare, pickled cucumber and shallots is chef Neil McCue's interpretation of a classic dish from chef Justin Leboe. PHOTOS BY JENNIFER HAMILTON

Plate Swap is a concept that chef Justin Leboe launched in 2013 to benefit the Brown Bagging for Calgary’s Kids program. In that time, the money raised from the annual event held at Model Milk has fed more than 75,000 children.

The event features a stellar lineup of culinary talent who are challenged to reinterpret one of their fellow chefs’ signature dishes. This year’s all-Canadian lineup includes Neil McCue formerly of Calgary’s Whitehall and the Michelin-star Curlew Restaurant in England; Charlotte Langley of Scout Canning in Toronto; Jesse McCleery of Pilgrimme on Galiano Island, Daniel Hadida & Eric Robertson of Pearl Morissette in Jordan, Ontario; and Justin Leboe of Model Milk and Pigeonhole in Calgary.

The five-course dining event is presented by S. Pellegrino and will be hosted by celebrity chef Matty Matheson, the star of Vice’s Keep It Canada, Dead Set on Life and It’s Suppertime. The gregarious and hilarious potty-mouthed star promises to add a certain witty irreverence to the evening, with ample cocktails and wine pairings backing him up.

To win two tickets to Plate Swap, simply post a photo and/or a description of your signature dish on Instagram, Twitter or Facebook with the hashtags #PlateSwap and #AvenueCalgary or email your signature dish story to jhamilton@redpointmedia.ca. Chef Leboe will choose the best entry and he will re-interpret it Plate Swap-style and feature it on the Model Milk menu with all the proceeds from the sale of that dish going to Brown Bagging for Calgary Kids.

The contest only runs until January 15th so hurry and get your entries in before midnight that night, and please feel free to share the inspiration or backstory behind your dish. The winner will be notified on January 16th.