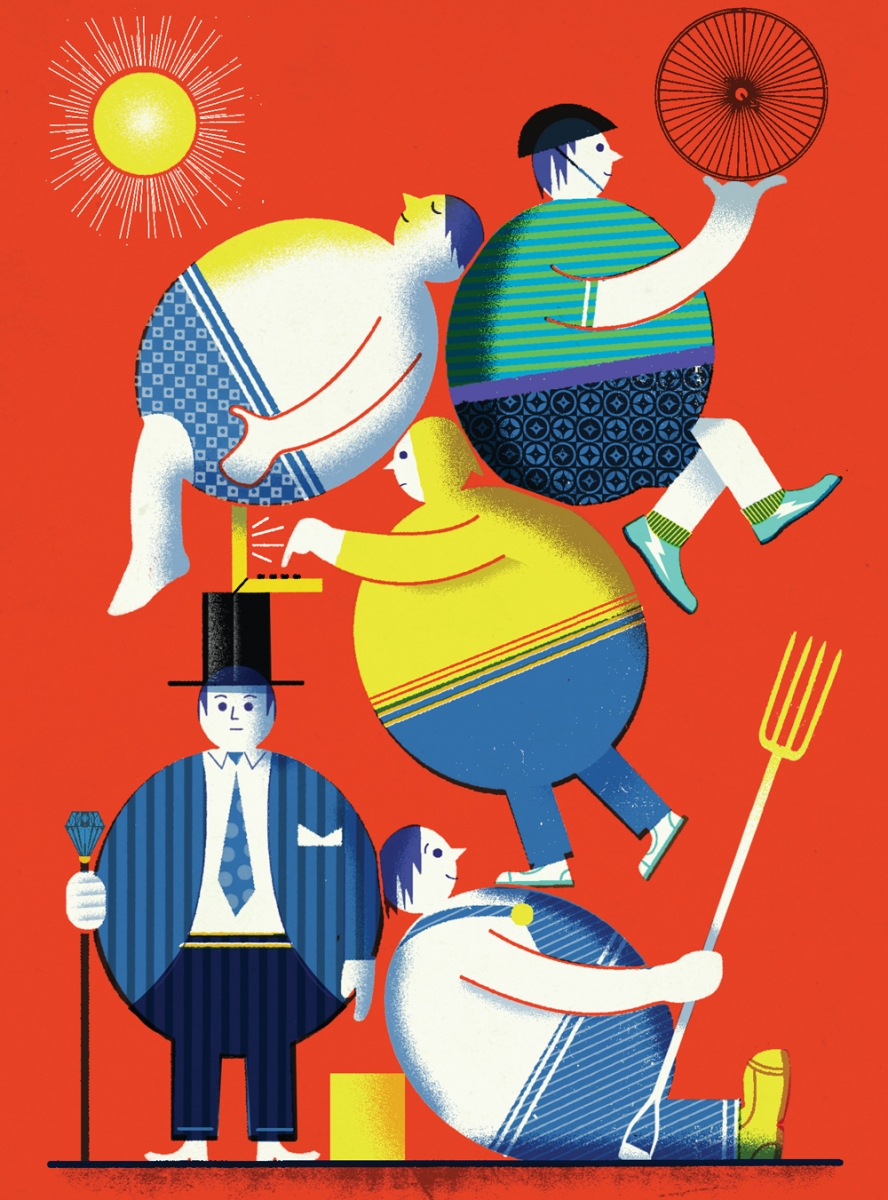 A Brief History of the Status Symbol

Long before anyone in the province zoomed a Lamborghini along a country road or gushed about the minerals in their countertops, there was one place an Albertan could shop that sent the indisputable message “I have arrived.”

“Eaton’s became a status symbol over the 20th century, especially for new Canadians and particularly in Western Canada,” says Donica Belisle, an assistant professor of women’s and gender studies at Athabasca University and author of Retail Nation: Department Stores and the Making of Modern Canada.

In the eastern parts of Canada, Eaton’s had rivals. In urban Ontario, the brand’s prestige was often eclipsed by Simpson’s (which later merged into Sears Canada), which had the more expensive prices of the two upscale downtown Toronto department stores. And, in Quebec, many French-Canadians remained staunchly loyal to Dupuis Frres, a successful Montreal department store with a French-only catalogue.

But for Western frontier cities like Calgary, Saskatoon and Winnipeg, Eaton’s was without equal in the first half of the 20th century. “People still remember that brand,” Belisle says of the now-defunct chain. “They remember Timothy Eaton, and Sir John and Lady Eaton. To be able to afford Eaton’s and wear Eaton’s and to live in an Eaton’s house, because Eaton’s even sold houses … that was all considered to be very high status.”

Every place and every era has its emblems of wealth and social standing. Human attempts to show status have been prevalent since early history, with some researchers arguing that architectural wonders like the Taj Mahal and the pyramids of Giza were built to send a message of status and honour. Some historians argue that status consumption was a practice that started when humans were hunter-gatherers.

The worldwide history of status symbols is a bizarre one that zigzags through everything from KFC (a current status symbol in some urban African cities) to American-style blue jeans (in the Soviet Union before the fall of the Berlin Wall). Status symbols of the past include tea (England and Holland in the 17th century) and the colour purple (used in the robes of Roman and Byzantine emperors and produced by a secret dye-making process).

In one of the first known physical markers of social status, Mayans pressed their children’s skulls into a variety of shapes to reflect their place in society. Which isn’t so odd in the context of all the painful things humans have done to their bodies over the centuries in the name of societal distinction. Small girls had their feet bound in China; Egyptians used boards and fabrics to shape the heads of young children when their bones were still malleable; and European women wore tight-laced stays to emphasize their diminutive waists, a tradition that started in the upper classes and was eventually adopted by working-class women, as well.

In more modern times, the amount of sun exposure on the skin signified a person’s place in society. Until the 20th century, it was the height of status to preserve a freckle-free pallor. Darker skin was an indicator of someone who laboured outdoors. Then, in the 1920s, along came trendsetting Coco Chanel, who, after catching too much sun on a Mediterranean cruise, made suntans as desirable as her fashions. By that time, many working-class people were occupied for long hours indoors; a suntan became a hallmark of someone who could afford to take a holiday.

Status symbols change over time, but the concept has been around for centuries, says Mohammed El Hazzouri, an assistant professor of marketing at Bissett School of Business at Mount Royal University. “We, as consumers, have always striven to show that we are high status. That goes way back,” he says. “We want to look like somebody who is higher status because that means we are doing well in society.”

According to El Hazzouri, the first modern reports of buying goods specifically for their status, what’s known as “conspicuous consumption,” come from Europe in the 19th century where the wealthy flaunted their affluence by wastefulness. “Being wasteful with food, being wasteful with money. The idea that ‘I do not need money or resources, so I can waste them,'” he says. “That’s what it was designed to show.”

As a middle-class developed, starting with the industrial revolution, conspicuous consumption grew, says El Hazzouri. For the first time in history, people were beginning to move from one social economic group to another. They publicly displayed their progress by buying goods and services that were associated with a higher social group – things like clothing, jewellery and imported goods.

People sought out status goods for reasons that went beyond economic class – often, the allure of a product was the sense of cultural belonging that came along with it. Looking at the Canadian experience, Belisle says that, as newcomers came to this country in the early 20th century, they were drawn to buying things from established Canadian brands like Eaton’s or the Hudson’s Bay Company. “To look through the Eaton’s catalogue and buy furnishings and toys really meant that you were becoming a Canadian citizen in the cultural sense,” she says.

Belisle says she doesn’t know of any historical status symbols specific to Calgary; the white hat may be closest thing. There were, however, products that marked a person’s high status throughout Alberta as the province grew. “A fur coat would be a symbol of high status … Or anything with a brand name. If you could buy brand-name goods, it always meant that you had more money,” says Belisle.

In Alberta, cars were early status symbols, particularly in rural areas. In the 1950s and ’60s, a woman achieved a certain standing when she could afford clothing from a store or catalogue rather than making her outfits at home. But, as more people could afford things like cars and brand-name goods, status symbols evolved. That’s the nature of status symbols – once they’re easily attainable, they lose their cachet, says El Hazzouri.

So items like cordless telephones, colour televisions and DVD players – once seen as luxury goods – morph from status symbol to run-of-the-mill goods and eventually just fall out of fashion altogether.

“We want to look like somebody who is higher status because that means we are doing well in society.” -Mohammed El Hazzouri, assistant professor of marketing, Bissett School of Business, Mount Royal University

Today, status symbols are more relevant than ever in our acquisition-mad culture, but they’re also incredibly difficult to define, says David Finch, an associate professor at Bissett School of Business. The Internet revolutionized social networks, Finch explains, so we now communicate with much broader networks of people. We connect with individuals throughout the world via platforms like Pinterest, Instagram and Twitter. We can check out what kind of sunglasses are de rigueur among the Hollywood set, what Amal Clooney wore on her last flight and what kind of organic mattress popular mommy bloggers recommend for kids. It’s a long way from the Eaton’s catalogue. In this wide-open marketplace of consumer goods, there are unprecedented ways to define status.

“Status symbols today are diverse, relative to what it was a generation or two generations ago,” says Finch. “It’s difficult to proxy and say, ‘Today, Calgarians view status as this or that.’

“It’s much more individually driven instead of a generation ago where broad-based statements could be made around what is accepted or what is normal. People wanted to aspire to achieve what is normal. Because of their limited access to what was normal, a status symbol a generation ago had much greater implications on personal behaviour and perception on value relative to what it does today.”

In other words, status symbols still signify that a person belongs to a certain group or class, but we have many more ways to find a sense of belonging and many more groups that we can belong to.

Status symbols today might include a tattoo on a gang member, a smartphone in a classroom of fifth graders or a top-of-the-line kitchen and an impressive wine cellar for a young professional. It might be the $10,000-plus Herms Birkin handbag that’s carried by celebrities like Victoria Beckham and Naomi Campbell. Or, flip that: it could be the modest cloth tote – a bag that sends a message of accessibility and individuality, rather than wealth. It could be a Range Rover or a Lamborghini. It could be resolutely hanging onto a beat-up old Ford F-150 or eschewing a vehicle altogether and buying a bike.

For some, acting eccentrically is a status symbol of sorts. That’s been borne out by research published over the last two years. A study published in the Journal of Consumer Research in 2013 reported that “nonconforming behaviours, like entering a luxury boutique while wearing gym clothes or sporting red sneakers in a professional setting” can send a signal of high status by expressing the message that this person can afford to follow his or her own path. The study also showed that university students deemed an unshaven male professor who wore a T-shirt to have higher professional status and competence than a clean-shaven professor who wore a tie.

It’s a trend that’s been building for the past few years, especially in the tech industry. In 2011, Silicon Valley consultant Tom Searcy wrote in an article about the new rules of dressing for success: “It’s a status symbol to dress like you’re homeless to attend board meetings.” It’s an observation that has been picked up and requoted every time Mark Zuckerberg puts on a hoodie.

There are also those who argue that living green is an emerging status symbol. Rebecca Carruthers Den Hoed, a researcher and Ph.D. candidate at the University of Calgary, says more young people today use frugality to intimate status. “People who forego a car and insist on cycling everywhere – that’s actually just as much a status symbol as buying something,” she says. “This opt-out generation is mostly people in their thirties. They grew up with a lot of wealth and now they are choosing a different kind of lifestyle.”

Carruthers Den Hoed adds it’s harder to embrace true ethical consumerism in the city than on the outskirts, even with the high visibility of green consumer items. She sees frugal ethical consumerism and the idea of opting out developing more in places like Canmore and Cochrane than in Calgary. “It is happening in the city somewhat, but mostly you see these people moving away from the city and into the communities on the outskirts,” she says. For this group of consumers, it’s their ability to make the choice not to consume, and to live their convictions, that confers the status rather than simply buying something.

“Status symbols are all in the eye of the beholder,” says Shauna MacDonald, founder and principal of Brookline Public Relations, a Calgary-based boutique PR agency. “It depends on who you are dealing with and what that person perceives as luxury.”

MacDonald, who has lived in Boston and near Toronto, says status symbols mean different things in different markets. She finds Calgarians a “little bit more subdued” about their brand exposure than those in other cities.

“The person who you think might want to be driving that Lamborghini or could afford to drive that Lamborghini is driving a Ford F-150 pickup truck,” says MacDonald. “In this city, there’s not that flamboyant exposure of status symbols, and I quite like that.”

Perhaps Giorgio Armani best summarized the complexities of modern status symbols in his introduction to The White T by Alice Harris, in which he wrote: “I love the T-shirt as an anti-status symbol, putting rich and poor on the same level in a sheath of white cotton that cancels the distinctions of caste.”

A white Armani T-shirt, by the way, retails for around $130.