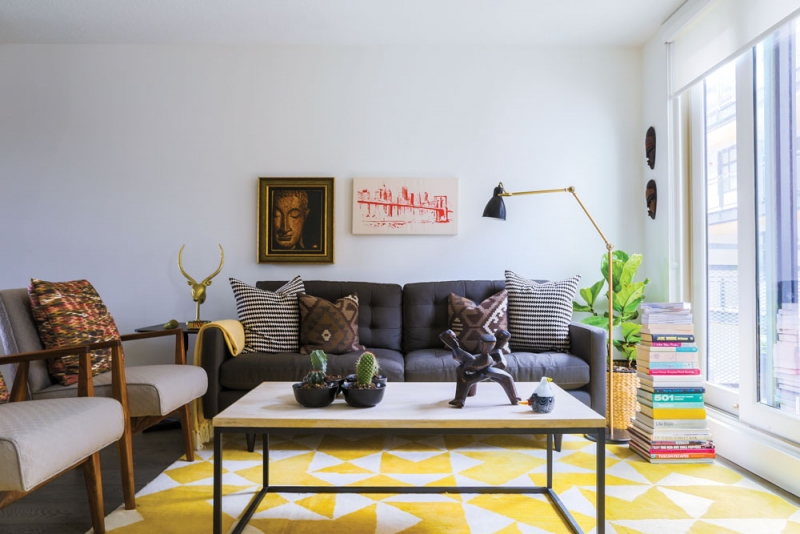 Jackie Kankam has travelled the world, from Ghana to the Galapagos Islands. As someone who always has her eyes on the next big trip, she wanted a home she could come back to after a long day and be reminded of the world outside waiting for her.

“I wanted a place where I could really come home and have it be my home,” she says. “I didn’t want it to feel like just another hotel. I wanted it to be ‘me.'”

Enter Elena Del Bucchia, owner of Elena Del Bucchia Design, who took on the challenge of filling a Lower Mount Royal townhouse with all the details needed to turn the small space into a reflection of Kankam.

It’s All In the Details

“Art was really important for her,” Del Bucchia says. “We didn’t want to go in and buy something from an art gallery that was meaningless to her. So we started with the art and photos from her travels and it became our main skeleton.”

One example of how Del Bucchia cleverly incorporated Kankam’s photo collection is seen upon entering the powder room. Little black frames are purposefully packed together from floor to ceiling, holding photos of Kankam’s travel adventures. In the kitchen next door, a bar cart is tucked against the wall, filled with an eclectic mix of liquor. Every bottle sparks a memory from Kankam’s travels – a rogue night in Amsterdam or a quiet evening in Budapest.

Each finely curated piece in the home has a story behind it, including the tribal masks from Ghana, the oversized trail map from New York and the painting from Kenya. “They’re all conversation pieces,” says Del Bucchia. “They also add a bold statement to the room, and everyone that sees it can reminisce on the stories that those pictures tell.”

With bright white walls and pops of bright red, yellow and black from Kankam’s art collection, the rooms feel bigger than they are, allowing the eyes to fall on all the unexpected details and take in the stories they tell.

Deciding on the home’s furniture and fixtures, like this cage light fixture from Crate and Barrel in the dining room, was a truly collaborative process.

When Kankam first decided to move out of Mission and into her new home in Lower Mount Royal, she decided she would try her hand at hiring a designer for the first time. She had met Del Bucchia four years prior through some mutual friends and decided to ask her for some help.

The construction of the townhouse was delayed by a year, so the two had 12 months to bounce ideas off each other, occasionally bringing to light a few differences of opinion.

“We got to the ‘I hate it’ stage pretty quickly,” says Del Bucchia. “But it’s perfect because we have a really open relationship and we can be honest with each other.”

Sitting at the kitchen table, they both burst out laughing as Kankam points to the wiry red light fixture hanging above them.

“We argued about this one for a long time,” says Kankam. “I remember telling her one day that it was in my car ready to be returned.”

But Del Bucchia stuck to her guns. Despite being a large and commanding piece, it’s still airy enough to see through and bold enough to divide the living room from the kitchen without taking up too much space. Once Kankam saw it hanging in context with the other furniture, she knew Del Bucchia was right. “I’m not afraid to admit when I’m wrong,” Kankam says. “And I’m consistently wrong.”

But that’s not always the case, either. They also disagreed about the bar cart in the kitchen that holds Kankam’s liquor collection from around the world. Del Bucchia thought it was a little too much alcohol to have as the centrepiece of the room, but Kankam knew she wanted it there and knew she liked the stories it told. So she fought for it, and it wasn’t long before Del Bucchia gave in, sending Kankam a text simply reading: “You were right about the bar cart …”

“The best thing about Elena is that I think she found out who I was in terms of design before I did,” says Kankam. “I always thought that I was good at putting stuff together, but, when you follow someone like Elena, who has this passion for design, who you can be honest with, who is patient and really listens, you get a home that is ‘you.’ That’s a good feeling.”

A bar cart stocked with bottles collected on the homeowner’s world travels sits against a chalkboard wall. Bar cart from Target.

The townhouse’s kitchen gets a personal touch with the addition of colourful decor pieces and a KitchenAid stand mixer in green apple.

When working on a budget, which pieces should a young homeowner invest in first?

Invest in larger pieces first, like your sofa, bed and dining room chairs. They are the pieces you use the most and make a large impact in your space. Make sure that they suit your lifestyle and will be able to handle the years of wear and tear. A good-quality and timeless set of dining room chairs can be very versatile with each space you grow into.

What are the advantages of white walls?

White walls are like a clean canvas that you can layer on top of. It gives you flexibility with your finishes, furniture and accessories. It works with almost any style of home and makes the space feel airy and bright. Art looks sharper along the white wall and your eye is more drawn to that contrast. The white canvas also stands the test of time and it doesn’t go out of style. The trick with white walls is to choose the right kind of white – not too stark and not too creamy. We used General Paint in “Mistaya” throughout the home.

What are some simple or inexpensive ways to make a small space look bigger?

You can never have too much storage, especially in smaller spaces. Clutter can feel claustrophobic, so the challenge is to provide the room with enough storage, yet not crowd the room. It’s best to select furniture pieces that serve a dual purpose – not only do you get one item instead of two to save the space, but it’s easier on the budget, too. For example, you can have a small ottoman or two that are used to store day-to-day items like bags or jackets, but, when you have company, you can use them for extra seating, as well.

What are some key elements to consider when designing a home that will be hosting guests?

When we entertain, we all have areas in our homes that people gravitate to, like kitchens, dining rooms and living rooms. It’s good to find a hook in those rooms, so, in Jackie’s space, we purchased a bar cart that stores liquor bottles that have been collected from all over the world. Each bottle has a story behind it that Jackie can tell her guests while mixing them drinks. Behind the bar cart, we also created a chalk wall. It becomes a fun attraction during dinner parties and allows everyone’s inner child to come out and be creative.

Graphic textiles in the front entryway help to create an upbeat first impression. Stepladder and bench seating from IKEA.