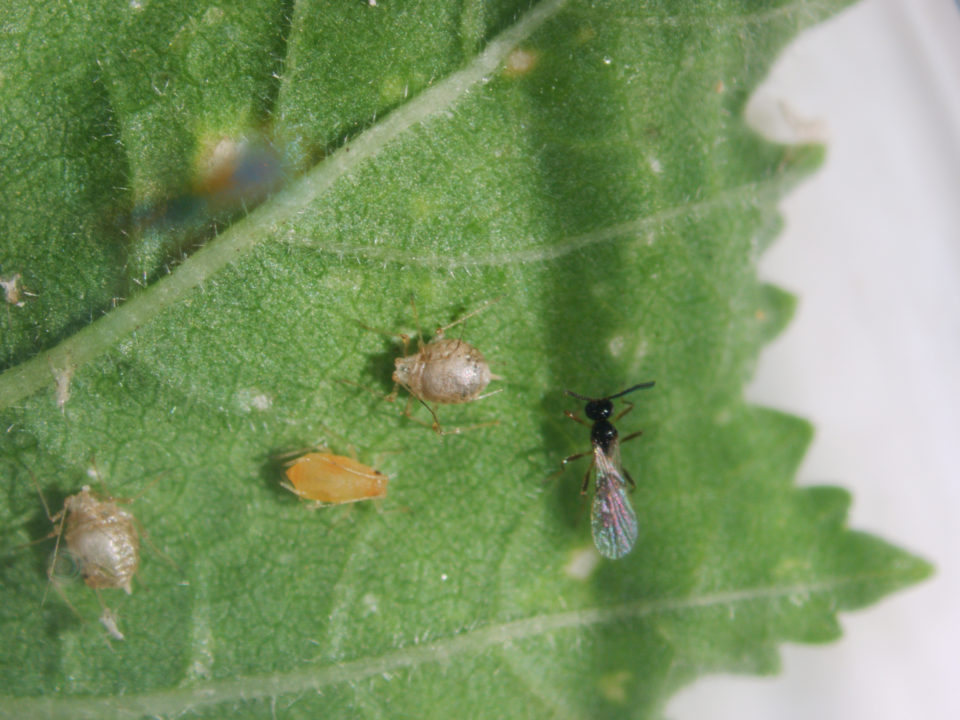 Photos courtesy of Ken Fry
You’ve spent hours planting, pouring, plucking and praying over your garden, only to pull out your carrots to find a stump and have the leaves on your cabbages chewed through. It’s the garden equivalent of a horror story, but it’s one you can avoid if you listen to Dr. Ken Fry, a professor who teaches integrated pest management in the school of animal science and horticulture at Olds College.

Caterpillar is a generic term for the immature stage of butterflies and moths. Two that are frequently found in food gardens are the cabbage looper and imported cabbageworm. While they can be removed by hand, they can be difficult to see. Fry offers an alternative solution. “There is an organically certified product called BTK (Bacillus thuringiensis kurstak),” says Fry. “The product name is Dipel, but there’s other products that have BTK.” BTK is a particular strain of soil bacterium that creates spores in response to adverse weather conditions. These spores come with parasporal crystalline bodies, which react to being inside the caterpillars’ gut by creating a toxin that binds with other proteins, eventually punching through the host’s gut. “It’s a really elegant tool for cabbage loopers and imported current worms,” says Fry.

These are the result of flies laying their eggs at the base of the stem of a plant. Once they hatch, these critters burrow down and can be hard to spot, as they stay underground, eating the base of a root. “You have to scrape away soil to see them, or come harvest time you go, ‘Oh, I had maggots,'” says Fry.

One method of prevention is keeping the flies from physically laying their eggs by covering plants with a spun polyester guard, a fibrous cloth that allows light and water but prevents insects from getting through. Another solution is nematodes. “There are insect killing nematodes and they chase down insects and eat them from the inside out.”

Aphids are small, round and usually green, though some are red, black or other colours, and can often be found hanging out in groups on the underside of leaves where they can avoid the sun while eating the plant’s sap. In warm weather, aphids can reproduce every four days, which means gardeners must maintain constant vigilance in order to keep them at bay, says Fry.
“Don’t look once a month. Don’t even look once a week. Look every three days, see what the [aphid] population is doing,” he says. “You can do hand squishing if you have a smaller garden, but if you have a larger garden, insecticidal soaps are effective against aphids.” If aphids have taken up residence on your trees and shrubs, a forceful jet of water, like the one produced by placing your thumb over the edge of a garden hose, should physically knock them off and keep them from returning.

Ladybugs are sometimes brought in to gardens to eat aphids, but Fry warns that buying and setting them loose in your backyard isn’t a good idea. “What happens with the commercial supplies is they’re unsustainably harvested, typically from California. Behaviorally, beetles hide for the winter in groups, but the first thing they want to do when they wake up is fly back to wherever they were before,” says Fry. “If you buy this container of lady beetles and open it up the first thing they want to do is fly, and few stay in your yard.”

Fry recommends simply conserving the beetles in your own yard, allowing the natural waking cycles of the beetles to unfold and keeping them in sync with the insects they normally feed on.

Hoverflies look like a bit like yellow jacket wasps. They’re known for “hovering” around flowers as they pollinate, and also for laying their eggs among aphids, which the maggots will feed on. So how do you make sure they’re in your garden? Fry says to have something flowering from April all the way through October. “[It’s like] I have a gas station open 24/7 because the adults need the nectar,” he says. “That’s what fuels their flight, their egg development. If I have flowers or “gas stations” open, I’m usually guaranteed to have these beneficial [insects] here doing their work.”