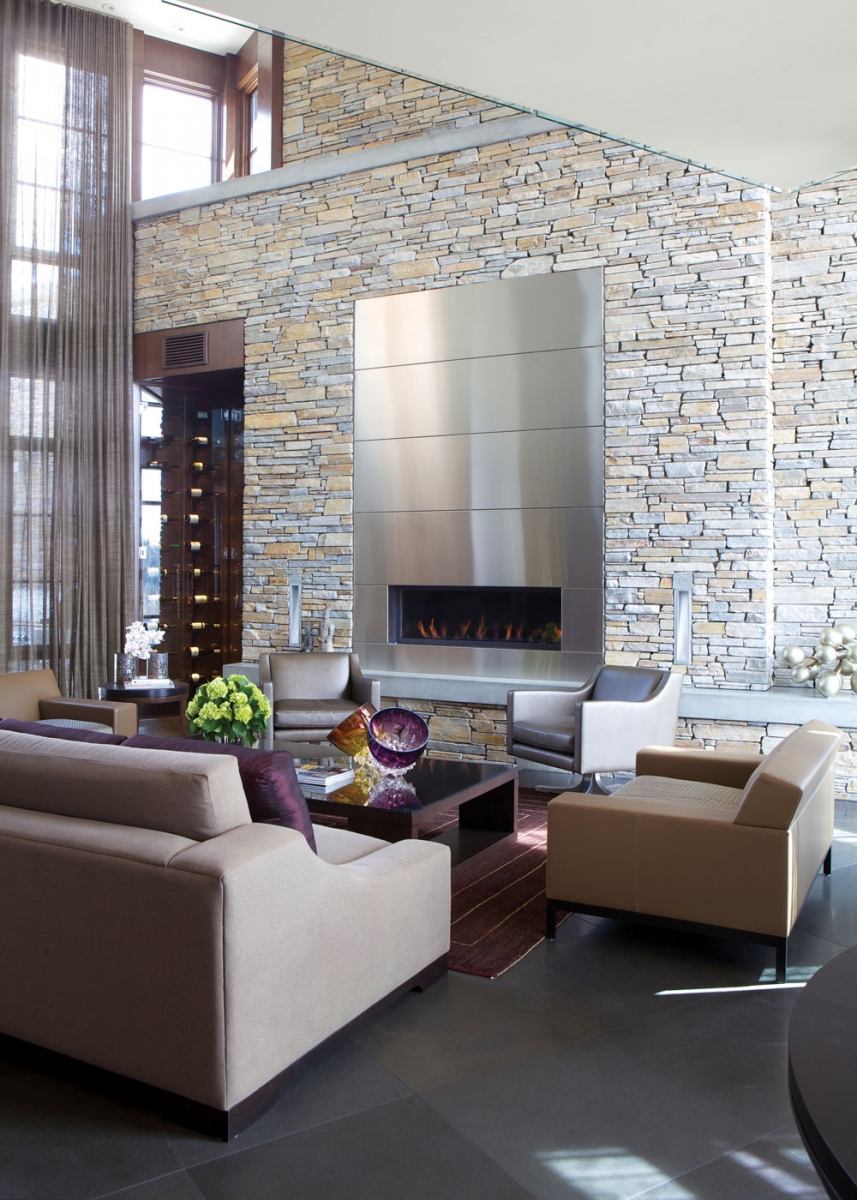 Contemporary Comfort: A Look Inside a Modern Home in St. Andrews Heights

The Chamberlains discovered the Montana honey ledge stone used throughout the home while on vacation in Kelowna, and traced it to a quarry in Idaho. Sectional from Red Eight Workshop; coffee and side tables from Holly Hunt.

Stepping into Wendy and Chris Chamberlain’s St. Andrews Heights home is a lot like stepping onto a forest path from the fringe. Everything about the light and sound changes, and you sense you are entering a calm, contemplative space where nothing is without purpose.

The couple’s 3,000-square-foot home was designed by Colorado-based architect Mark Tremmel and looks out from its perch above the river valley toward a stand of 100-year-old Douglas fir trees. Light pours in through a bank of two-storey windows and from oversized skylights set at the top of a custom-fit coiled staircase. The venetian-plastered walls turn the winding corridor into a strong architectural feature.

Most of the second storey is occupied by the master suite, which is formed by a series of connecting rooms and includes a sleeping chamber, a walk-in closet adjoining the laundry and a sitting room and writing room accessed through a greyed-oak catwalk above the living room. 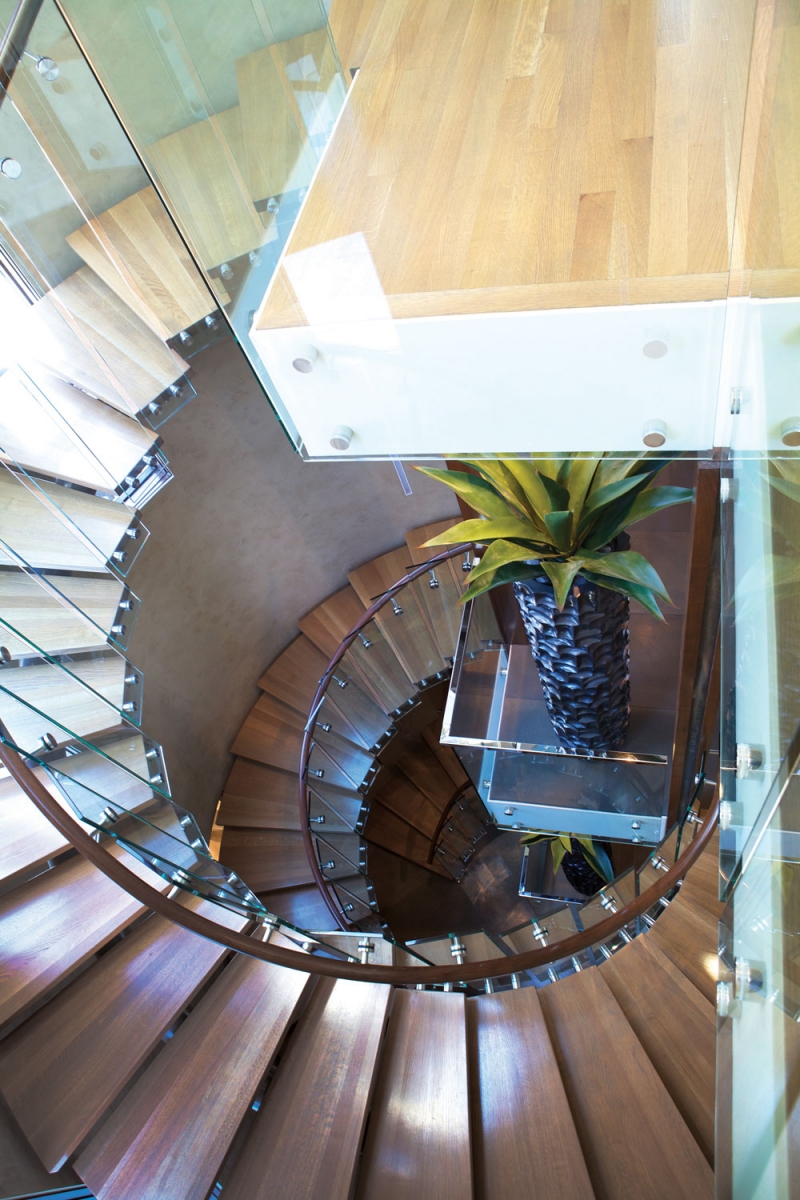 A three-storey spiral staircase was crafted specifically for the home. No two treads are alike.

Layering up a natural palette

The interior is richly appointed with traditionally heavy materials like walnut, basalt and ledge stone, but the overall feeling is still light. “There’s a kind of quiet, natural palette to the house that isn’t flashy and glossy,” says the designer, James McIntyre.

The centrepiece of the home is its jewel-box, walnut-clad kitchen. The back of the millwork was designed to become the entry to the home and it wraps up onto the ceiling. Carefully placed spotlights and LED strips shine down to make the mirrored backsplash sparkle in contrast with the leathered granite counters.

A wall of stone surrounds the steel-clad fireplace with warm gold, grey and cream tones. “It took us a long time to find the stone,” says Wendy. They finally found the Montana-honey ledge stone they loved on a home on Lake Okanagan and then traced it to a mine in Idaho. 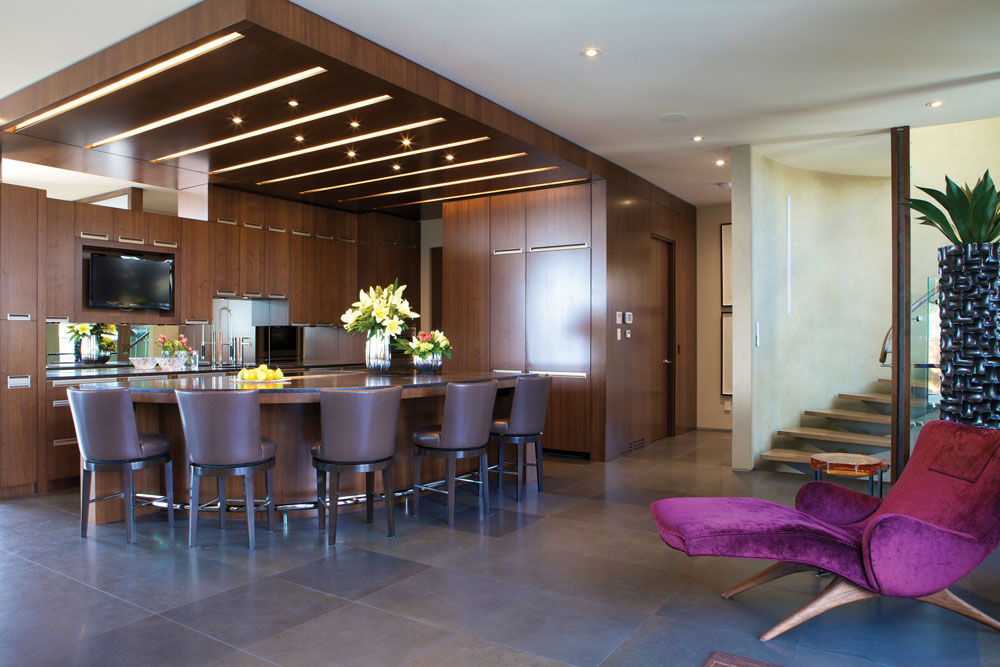 A splash of colour comes from a Ralph Pucci chair. Counter stools from A. Rudin.

Comfort guided many of the decor choices for the Chamberlains’ home. McIntyre points out that Wendy was clear she needed comfortable seating at the kitchen island because she wanted people to feel encouraged to pull up a chair and stay.

Building the home took two years, finishing in June 2011. “Chris and I very strongly believe that the reason this process was such a joy was because of the people we surrounded ourselves with,” says Wendy, noting the builder, Doug Rawlyk, laid out a detailed 18-month timetable from the start. 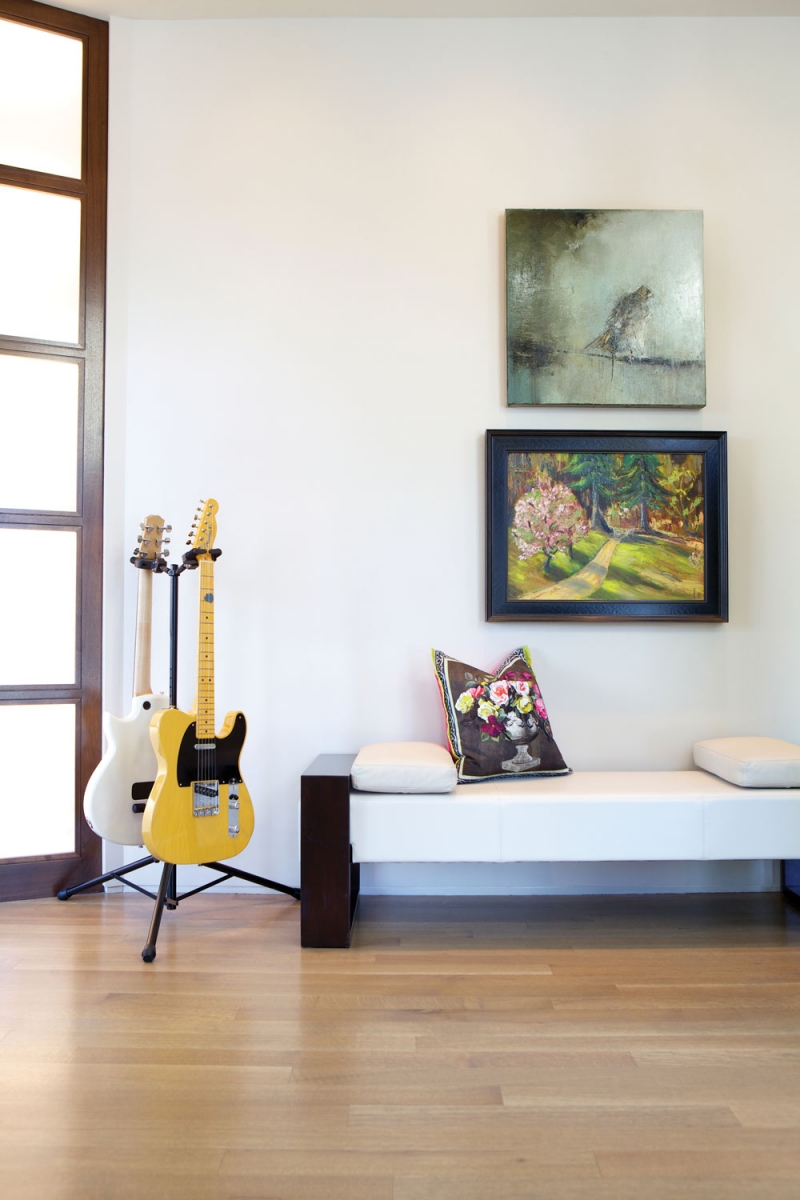 Homeowner Chris Chamberlain plays and collects guitars. His favourites are displayed around the house.

A key part of the design team was the eponymous firm McIntyre Bills, who did all of the home’s interiors. James McIntyre handled the decor and Ronald Bills the architectural detailing. 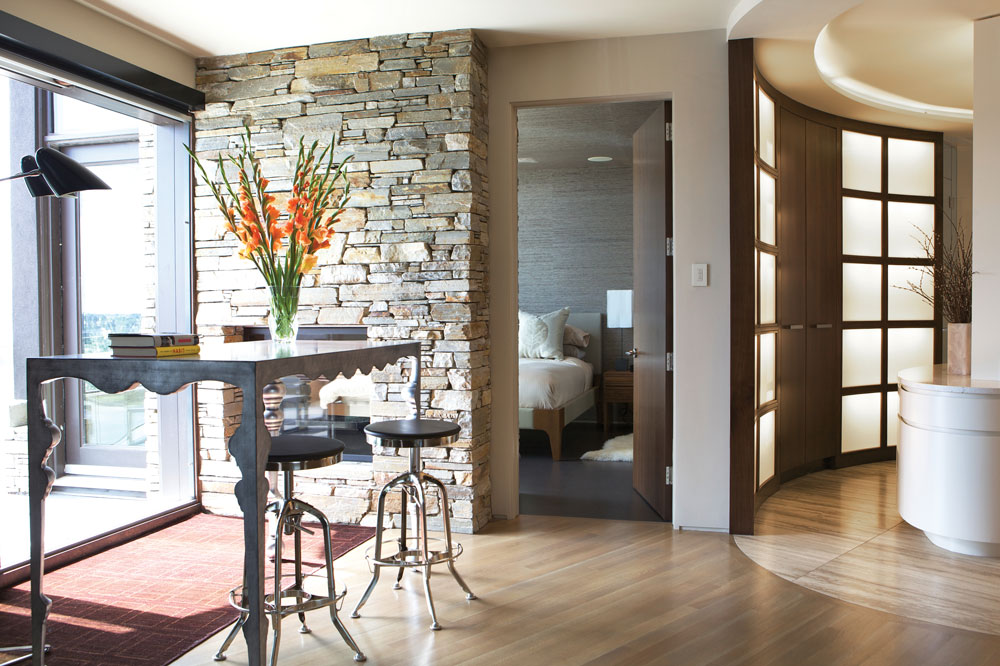 A writing room outside the master bedroom provides a calm space to get organized for the day. Stools from Restoration Hardware; lamp from David Weeks Studio.

The team selected most of the furniture over a two-week period about six months before the project was completed. “[Wendy] purchased some really beautiful, good-quality furniture,” says McIntyre. Notable pieces include a Holly Hunt bed and a purple Ralph Pucci chaise that sits just off the kitchen. 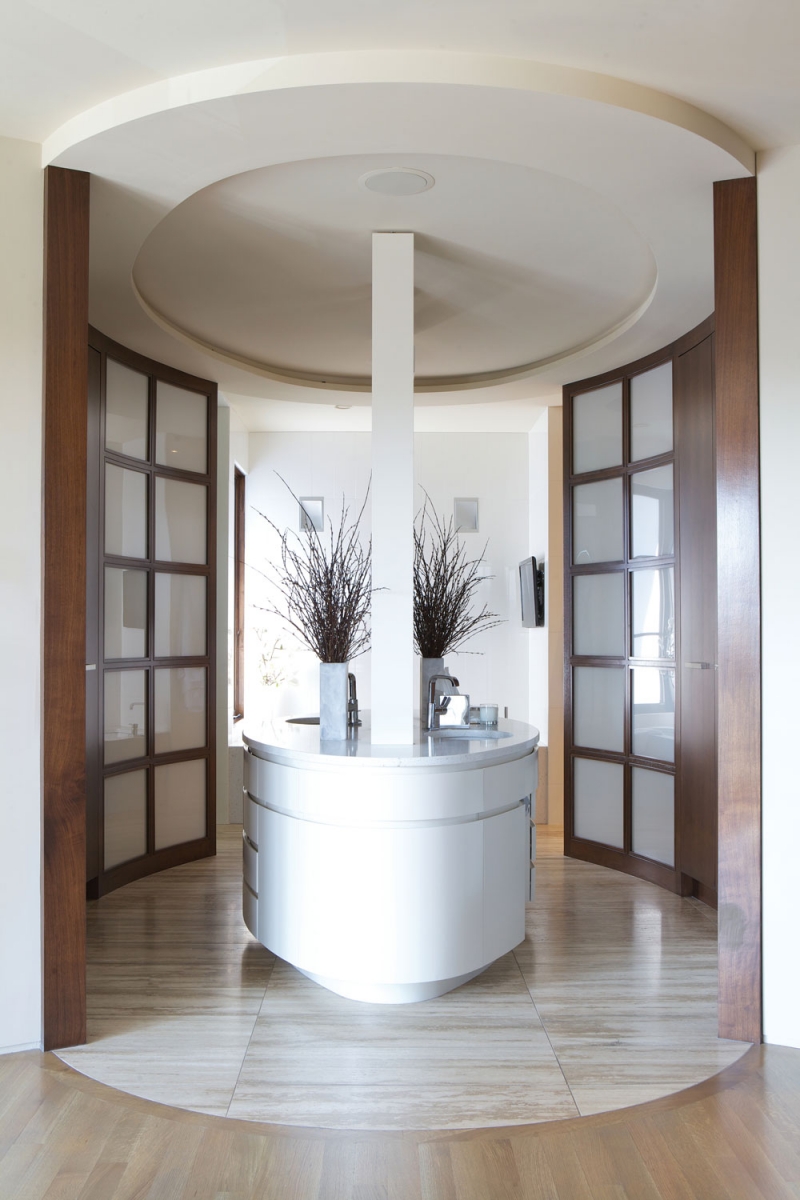 An island vanity with his-and-her sides marks the entry to the ensuite.

McIntyre agrees the highly structured design process was key to the successful result. “Even when it wasn’t being built, [we had] weekly design meetings. That process was really tight all the way through, and I think the house reflects that,” he says.

The team began working on the home’s lighting very early in the design process. In the ensuite, the lighting is embedded in details like the trey ceiling that floats above the vanity island and in the curved, walnut-clad shoji screens that line the walls. These LED-lit screens are repeated in the entryway, the office and master closet and bring natural light into the house during the day. At night, they transform into a lit architectural feature.

A crystal chandelier by Alison Berger is one of the only light fixtures used in the home.

McIntyre says the Alison Berger cut-crystal chandelier in the dining room is one of the only fixtures in the house, and a favourite piece. “I just love that you can see right through it,” he says. “It’s kind of like good minimalism to me.” 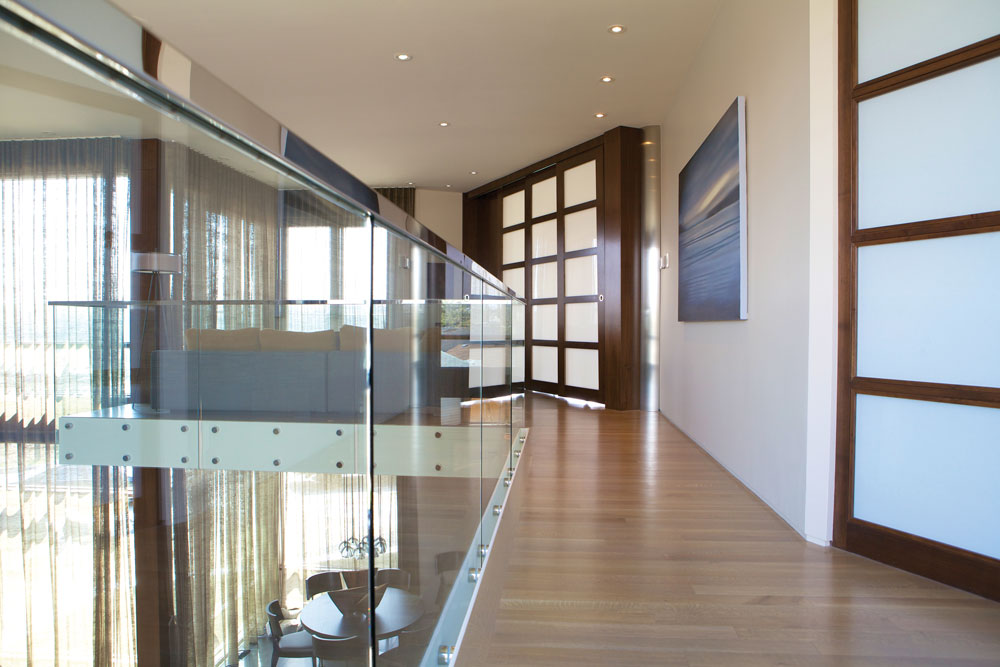 Shoji screens are used throughout the home and bring natural light into the master suite and its walk-in closet.

Despite the home’s modern vibe, clean styling and multitude of hard surfaces, there are a few elements that keep it from feeling cold, a common complaint about contemporary architecture. McIntye points out the modern lines of the architecture and stone are softened by the use of linen drapes that fall two storeys along the home’s dramatic expanse of windows. “I just knew that it needed to be softened,” he says. 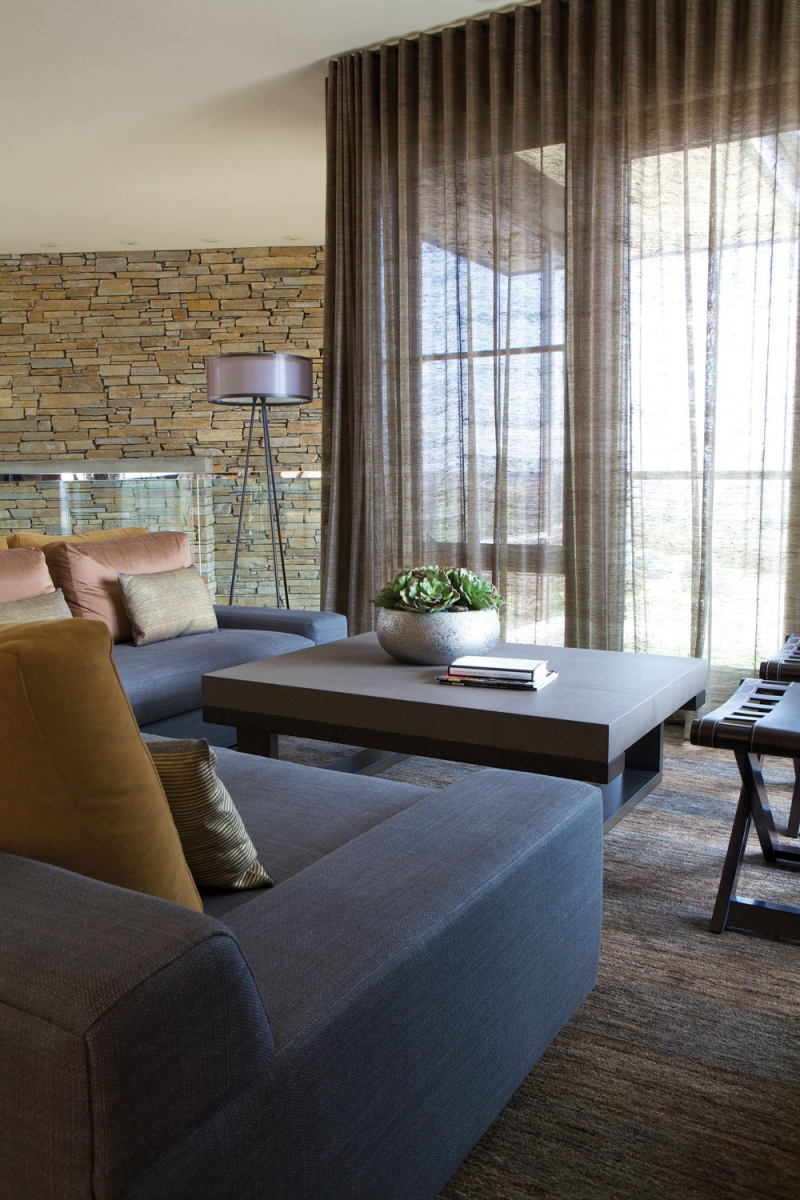 Sweeping river valley views are enjoyed from the private upper lounge outside the master suite. Sectional from Red Eight Workshop.

The home’s walls were painted in Rice Paper (6195-31) by Sico. McIntyre says keeping the palette grounded in nature was important. “Even though it’s contemporary, there’s a naturalness to the house, to the colours of the stone and the wood and the floor,” he says. 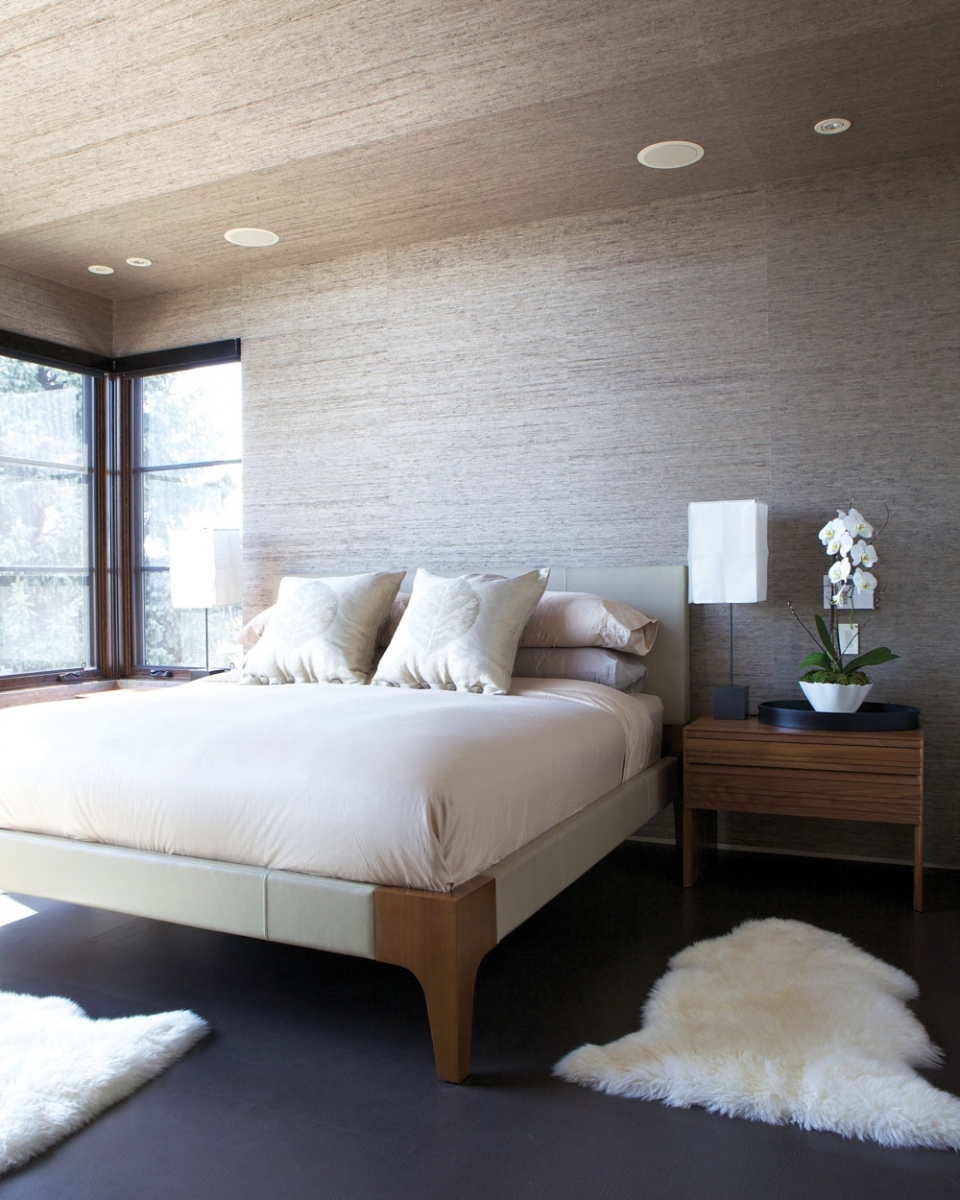 The elegant Holly Hunt bed and leather floors are defining features of the master bedroom.