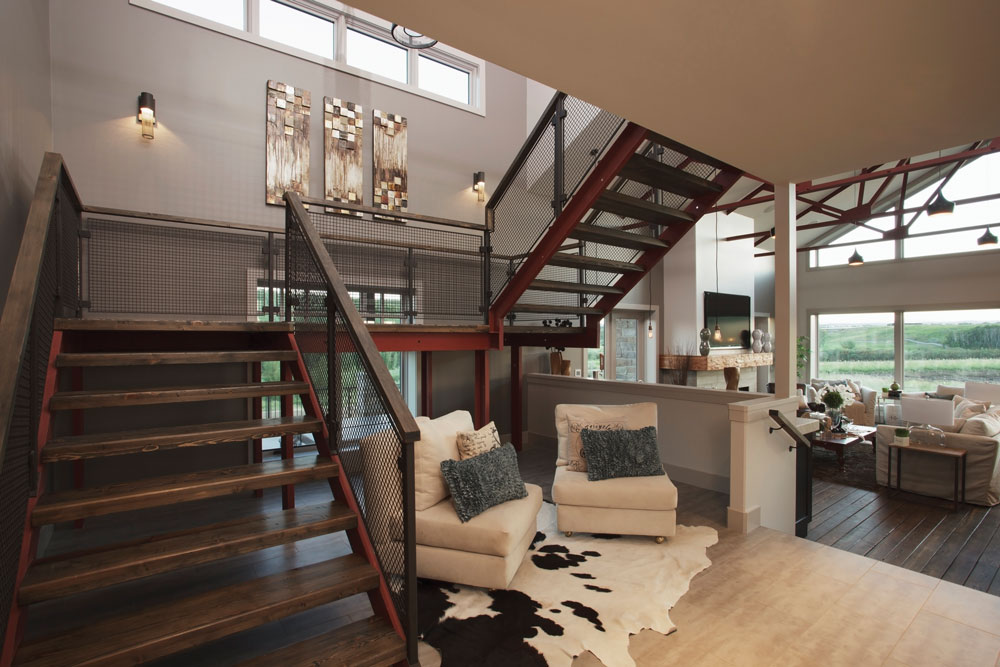 It is a brave man (or woman) who agrees to take on a project that is neither a new build nor a renovation. But, for Jeff and Jennifer House, their project had the end goal of not only creating a family home but also preserving family history.

Tucked away in the prairie landscape south of Calgary, bordering the Sirocco Golf Course, is land Jennifer’s family has owned for two generations. Some of it was divided and sold to developers, and the rest was split into parcels for family members.

The homeowners wanted to create a “rustic industrial” feeling that nodded to the building’s past but also created a comfortable modern home.

On one of these parcels sat a large concrete structure from the 1930s that was originally used as a dairy barn. Jennifer’s father couldn’t bear to knock it down and hoped that one of his daughters would take on the task of turning the dilapidated building (that had only been used in the past 50 years as a perfect location for games of hide-and-seek) into a family home. And so, after countless hours of ideas, plans and drafts, the Houses decided to convert the former barn into the home of their dreams.

“The process was years in the making,” says Jeff. “Initially, we thought, ‘No way, this is going to be way too much work and money,’ but, as time went by, we decided it would be so different that we had to at least try. There was always the risk it would be a disaster, but we hoped that, with our collaboration with good designers and construction experts, they could help us realize our vision.” After many conversations with and quotes from homebuilders around town, the couple chose Mike Serrao, owner and general manager of Malbec Homes, to assist them with their project. 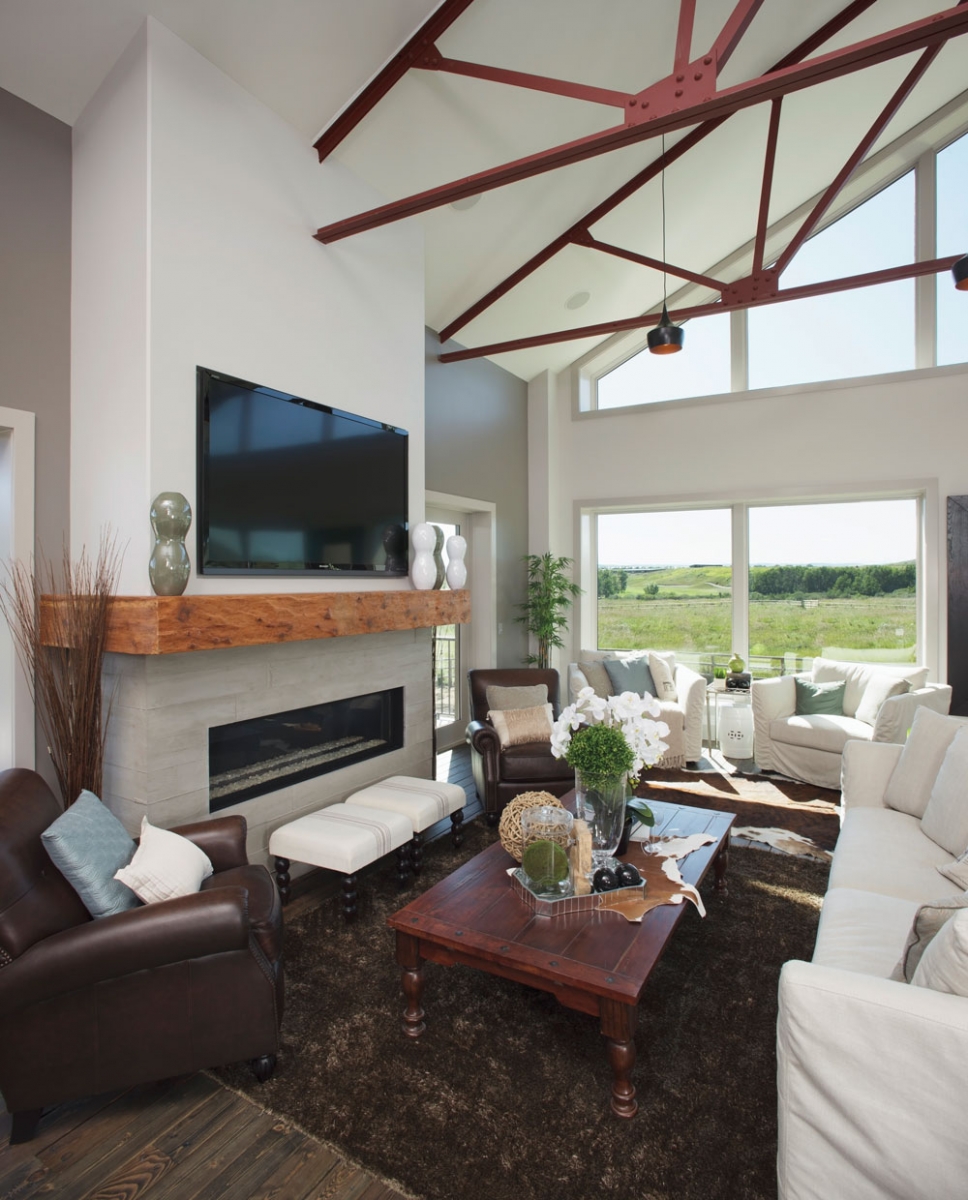 Many of the home’s features were repurposed from the original barn including the mantlepiece, the ceiling trusses and the floorboards.

“Our collaboration with Mike felt like a partnership,” says Jeff. “[Malbec Homes] saw it as not just another project but as a showcase for what they could do. We felt like they were equally invested into the project.”

Perhaps the most spectacular feature of the property is its placement within the landscape. Tucked back from main roads, the home’s south view looks toward a winding creek and large hillside. Herds of deer (and the occasional moose) can be seen running through the backyard or stopping to take a drink from the creek. To the west are expansive views of the golf course and the Rocky Mountains. The homeowners chose to have the west wall almost entirely composed of windows to capitalize on this vantage point. To the north, you can see the tops of Calgary’s skyscrapers.

“I love all of the windows and light,” says Jennifer. “The wildlife we can see is spectacular. It also is a pretty different dynamic between winter and summer.” 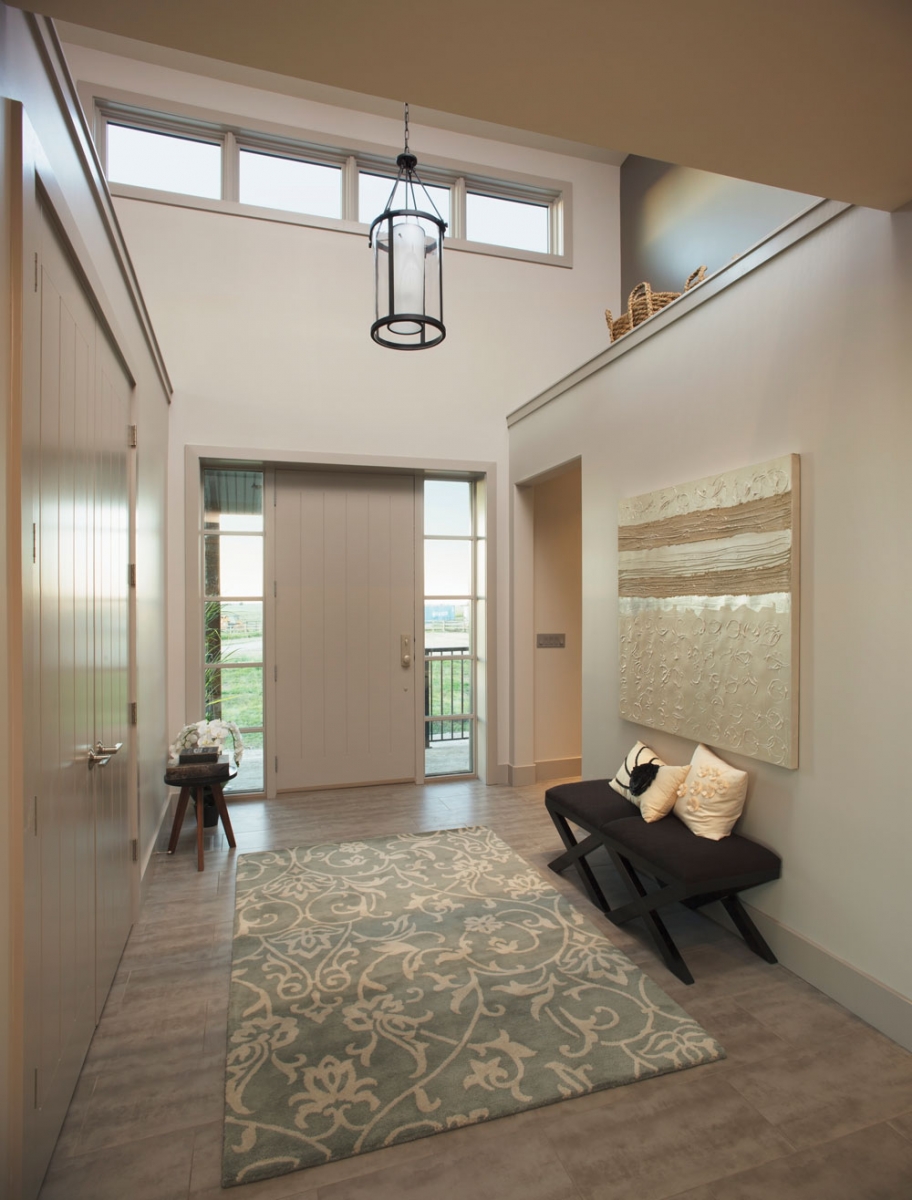 Windows were added throughout the home, bringing natural light and an airy feeling even to the hallways.

Today, the new structure pays homage to its history but also carves out its own aesthetic as a modern family home. The roof was raised three feet to accommodate a loft for bedrooms, an office and an upstairs media room. The main floor boasts 23-foot vaulted ceilings and an open-plan entertainment space. The refinished floorboards were pulled out of the upstairs hayloft, and the ceiling trusses are original to the old structure (although they are no longer load-bearing after the conversion).

The fireplace mantelpiece also pays tribute to the home’s heritage. Created from a horse-stall log, not only is it branded, but it also still has the teeth marks from the barn’s former equine inhabitants. 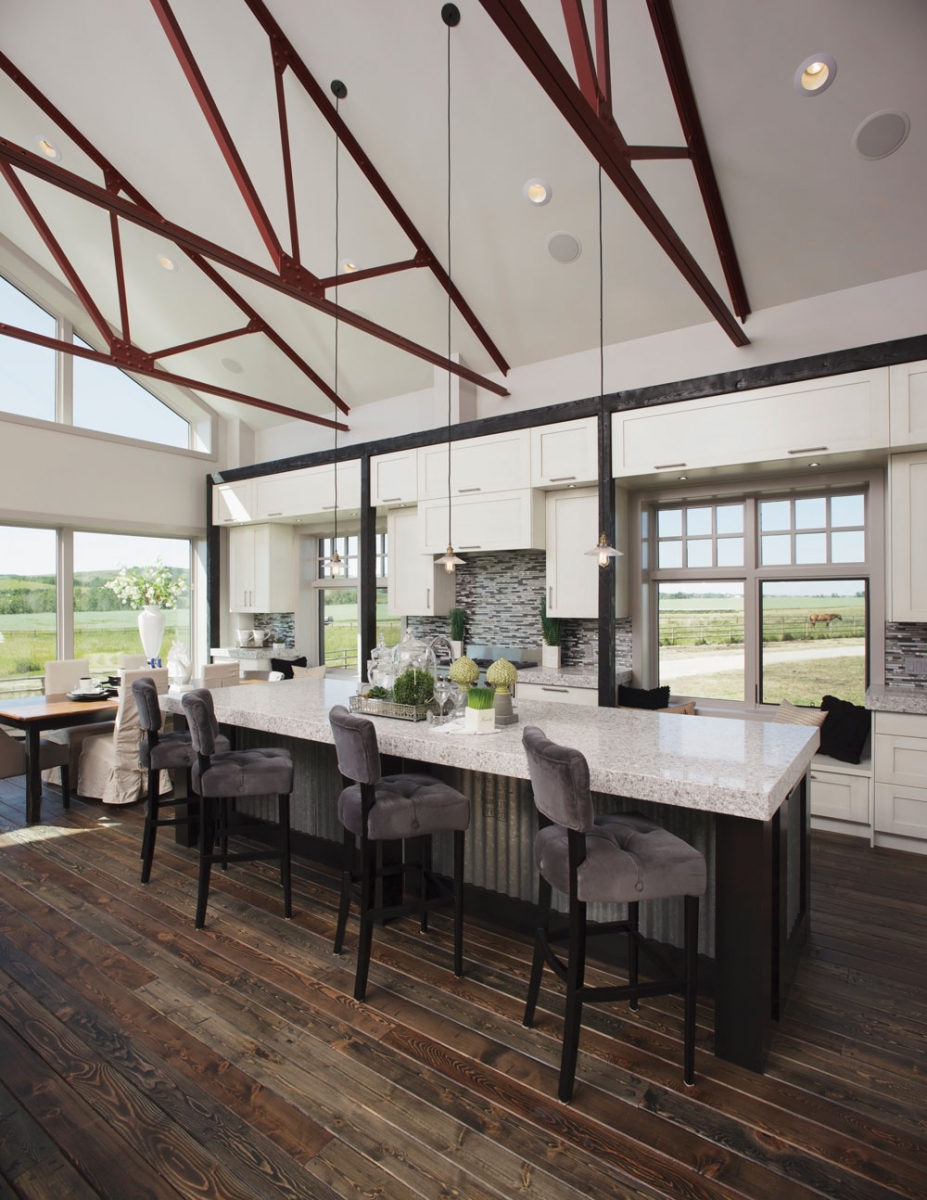 The redesign takes full advantage of the building’s spectacular views of the Rocky Mountains with a west-facing full-height wall of windows.

The base of the kitchen island is wrapped in tin from the original roof and both the treads and steel in the central staircase were created from recycled materials. Off the kitchen, beside the stairwell, is one of Jeff’s wish-list items: a bar with his own beer tap.

Careful attention was taken to create a look that the couple calls “rustic industrial.” They didn’t want a traditional barn look, but rather a contemporary take on the history of the structure. 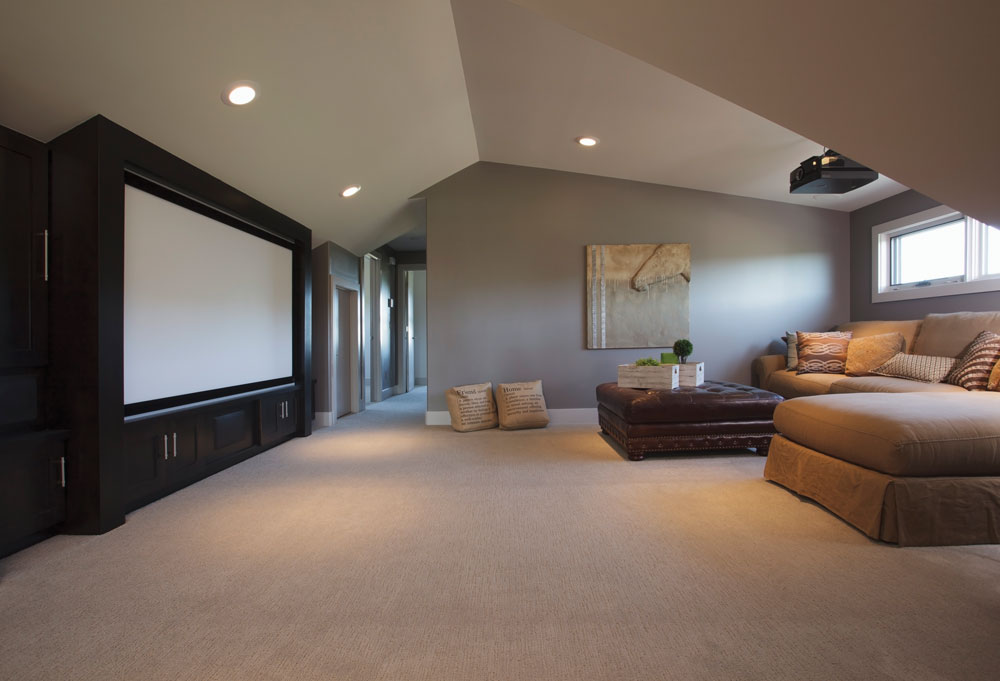 “We wanted the main area to be a gathering place where the whole family could be together, whether it was eating, cooking, dining, kids playing or having a beer at the bar,” says Jeff.

The project provided the homeowners and the builder a unique set of challenges, but the end result is a big payoff. 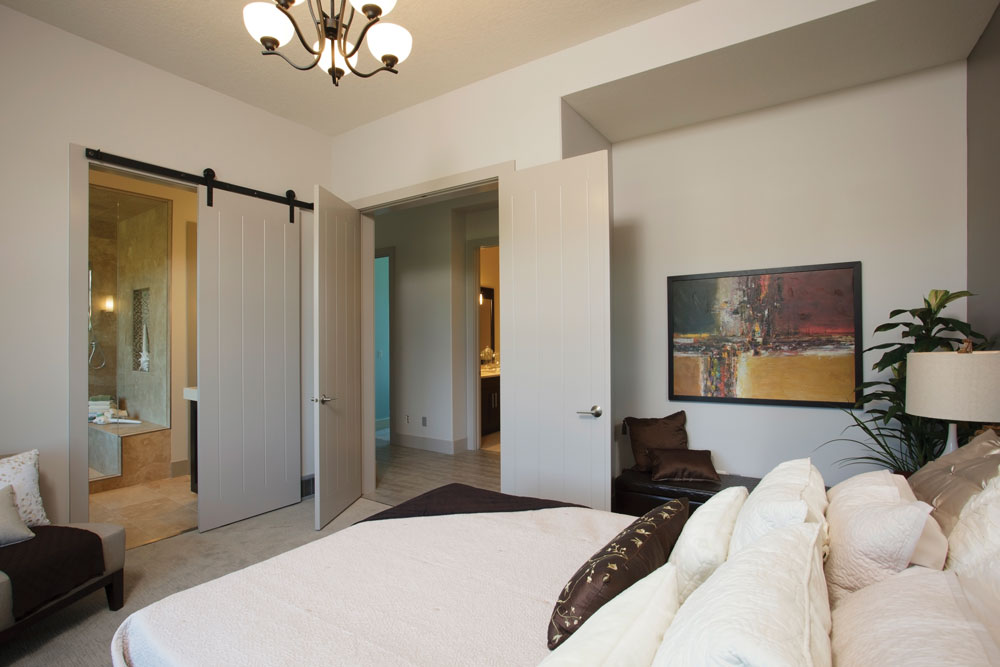 Sliding barn-style doors are a nod to the home’s past life.

Serrao says this project pushed his creativity and construction know-how to the max. “I got to use a lot of imagination on this project, whether it was designing the framing boxes or figuring out how to best use the materials,” he says. “All in all, we’re super-happy with the final product, and we were more partners with the homeowners than a builder for them. We’ve gained two friends from this process.”

Reflecting on the eight-month project, the couple says they couldn’t be more pleased with the end result. The home is perfect for them, their children and their guests and offers both a retreat and a practical place to live. 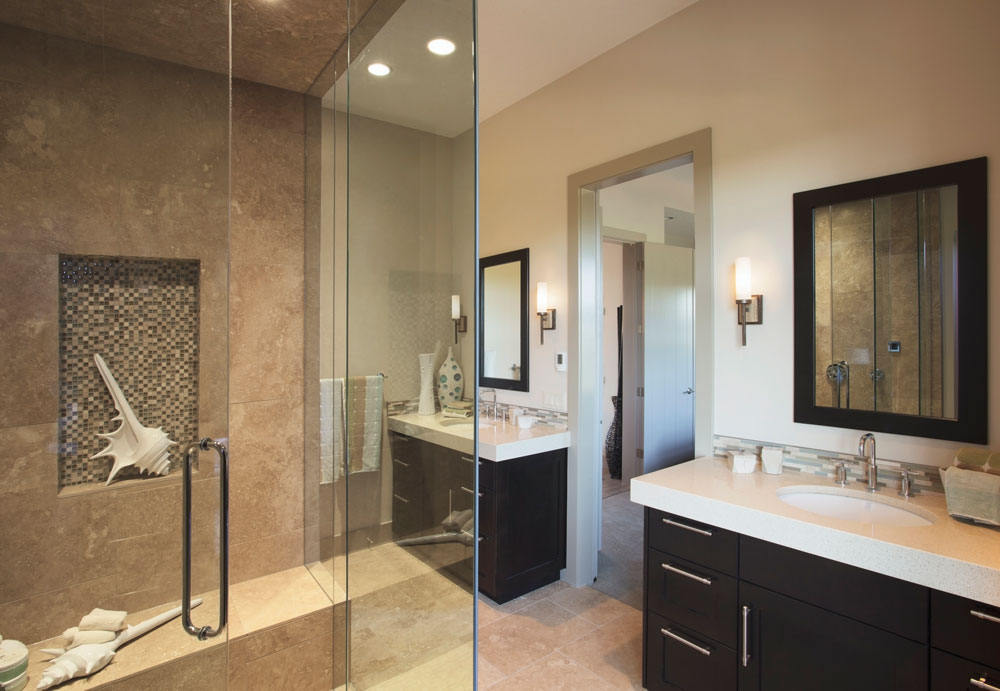 Throughout the home a neutral colour palette is used to create continuity, including here in the principal ensuite. 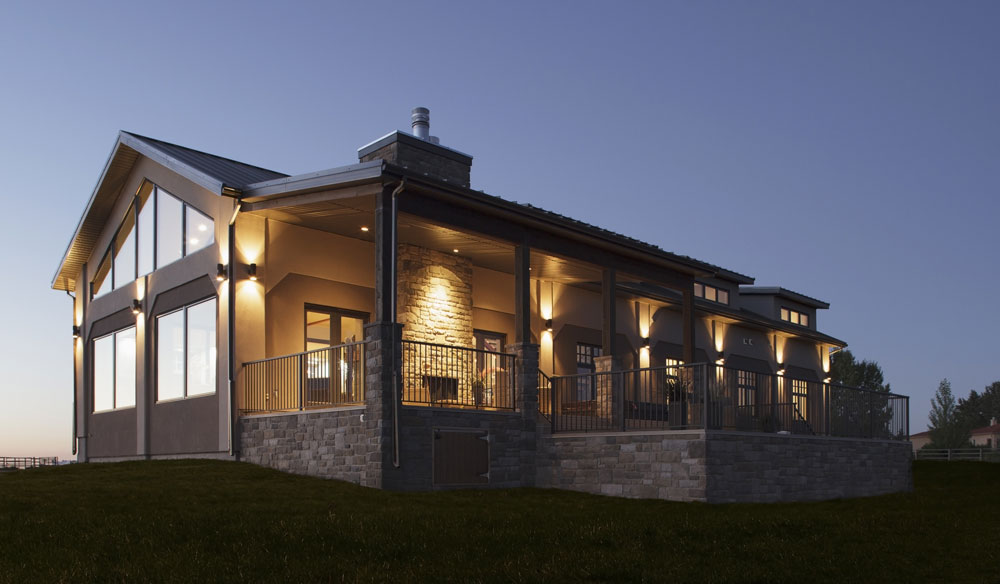 The redesigned home echoes the building’s past but brings a modern aesthetic.

The homeowners recycled as many materials from the barn as possible, including the tin roof for the island facade and the wood floorboards from the hayloft for the main-level flooring. By using these materials in clever ways, Mike Serrao, owner of Malbec Homes, says it creates both character and a contemporary feel.

By introducing materials such as steel into the stairwell, dark stains in the wood and industrial light fixtures, the homeowners achieved their goal of a “rustic-industrial” aesthetic.

An old photograph of the horses that resided on the property in the 1950s sits at the end of the hallway.

A contemporary barn is light and airy and offers views from every room. When considering window placement in rooms, save the best views for large living spaces.

Looking for Vegan Footwear in Calgary? Check Out The Grinning Goat