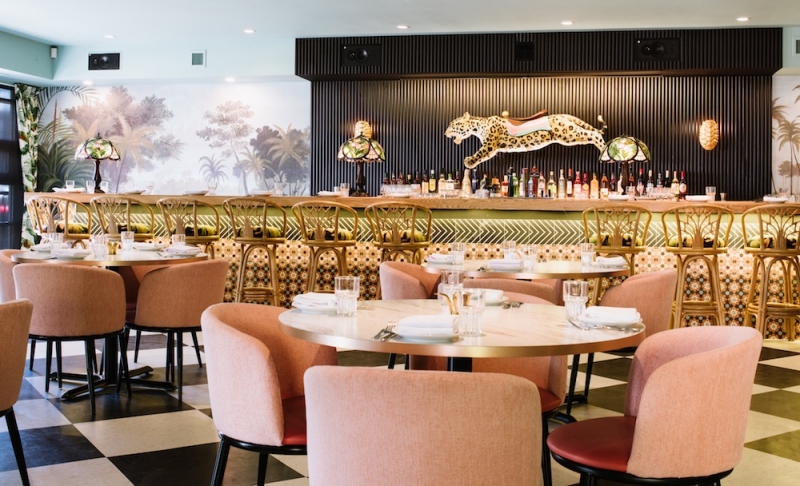 After less than two months in business, Calcutta Cricket Club has already established itself as one of the most exciting new restaurants to open in Calgary this year.

While the Indian restaurant’s Bengali cuisine obviously plays a huge part in that, the restaurant has also been getting lots of attention for its design. Local artist Maya Gohill, who is a restaurant partner along with Cody Willis, Shovik Sengupta and Amber Anderson, took on CCC as her first restaurant design project. But you wouldn’t know it was her first by looking at the space.

Over a few short months, Gohill transformed Bar C’s former space (which had a neutral, grey and white palette) into a colourful, colonial-inspired one that pulls from a variety of sources. The space is influenced by the vibe of Indian social clubs in the ’60s, as well as Mumbai’s parsi cafes, which Gohill says often feature checkered floors and family photos (like CCC). Palm tree motifs and the green, blue and pink colour scheme also harken to shows like The Golden Girls and the aesthetic of famed filmmaker Wes Anderson.

“A style that I really gravitate towards is the filmmaker Wes Anderson and his decor style. Early on, it was kind of this idea of let’s think of this as something that would be on the set of a Wes Anderson film if it was filmed in the ’60s in India,” Gohill says. “And interestingly enough, those are colours that I never shy away from when I work. When I paint, I tend to use a lot of turquoises, blues, greens and bright colours.”

The restaurant also has different vibes depending on where you’re sitting.

We asked Gohill to go into the details of some of the spaces in the restaurant.

The leopard above the bar 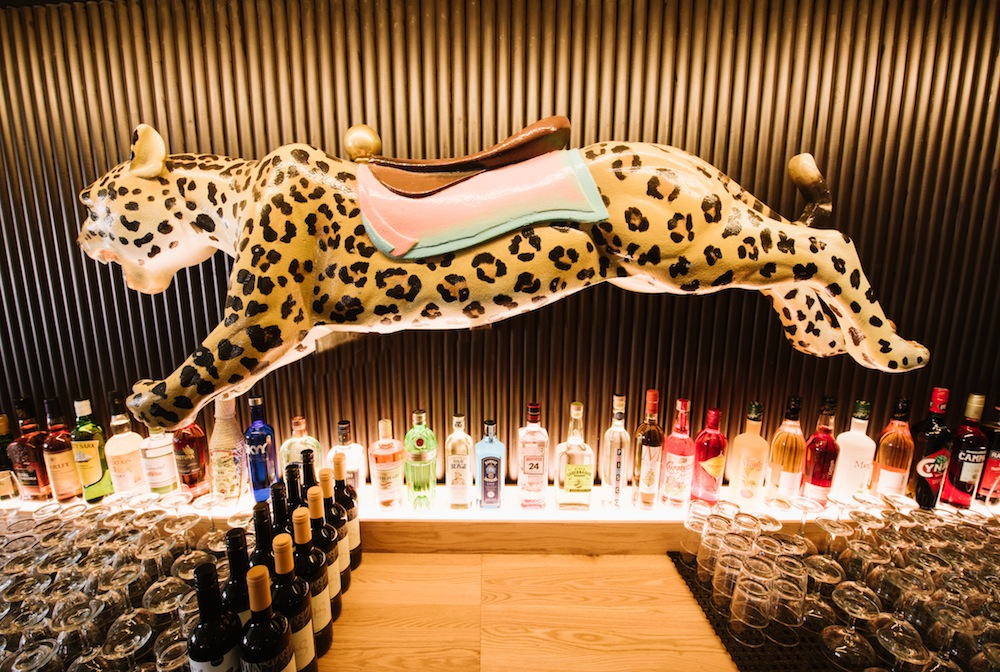 “We came across the leopard that you see on the wall at an antique mall on Blackfoot Trail. It’s a vintage carousel leopard. It was just above a doorway on a shelf [at the antique mall]. I wasn’t looking up, but Cody was. He looks and he said ‘Oh my God, look at that,’ and then it was like okay, we have to get this. We are getting this no matter what,” says Gohill. 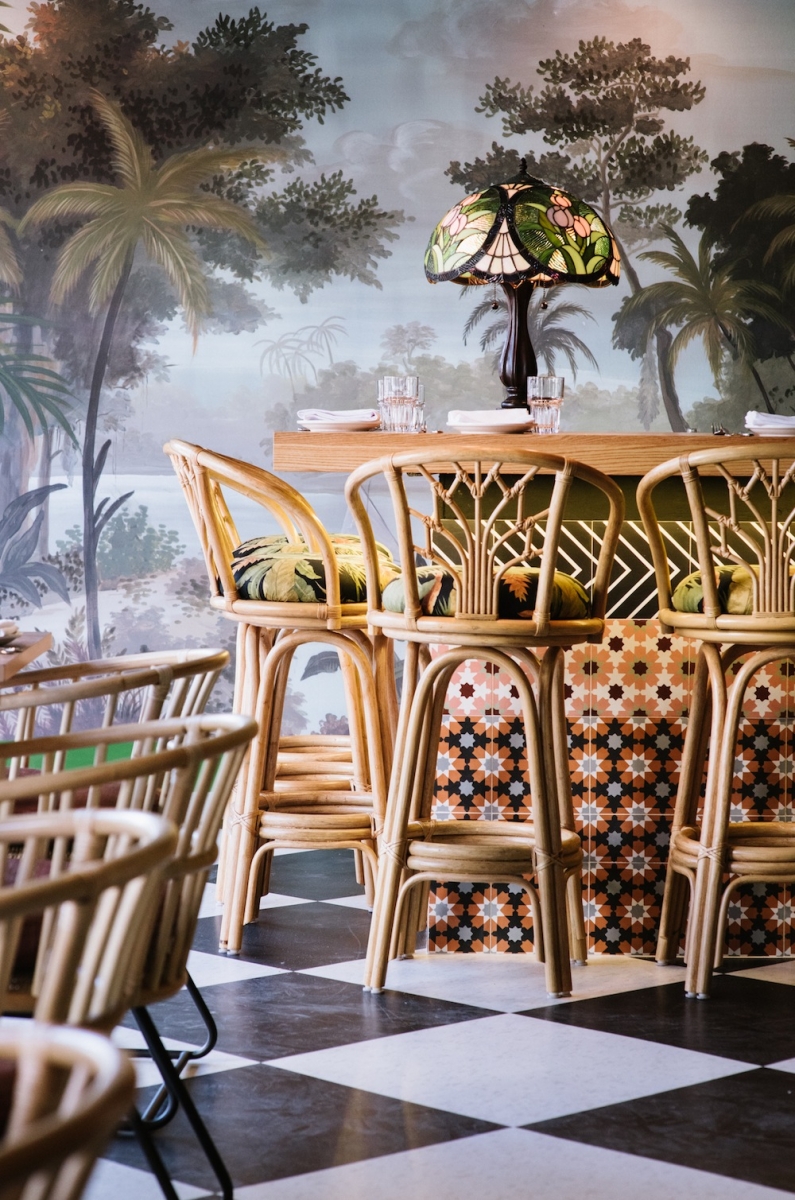 The vintage carousel leopard above the bar may be the first thing your eye is drawn to, but CCC’s bar area is full of equally notable details. The team decided to leave Bar C’s previous red oak bar intact, so Gohill chose three kinds of Morrocan ceramic tiles with lots of pattern to add to the bar front. A palm tree wallpaper adds a bit of the ’80s Golden Girls vibe, along with bamboo bar chairs with leaf-patterned cushions. Tiffany lamps on top of the bar finish off the look.

“One of my favourite places to sit in any restaurant is either at the kitchen bar or at the bar itself because I think it’s always got the best vibe in the room. You can sit up a little higher and see what’s going on and you really feel like you’re part of the mix. So that was an important part to focus on,” says Gohill.

The cricket player prints near the front entrance 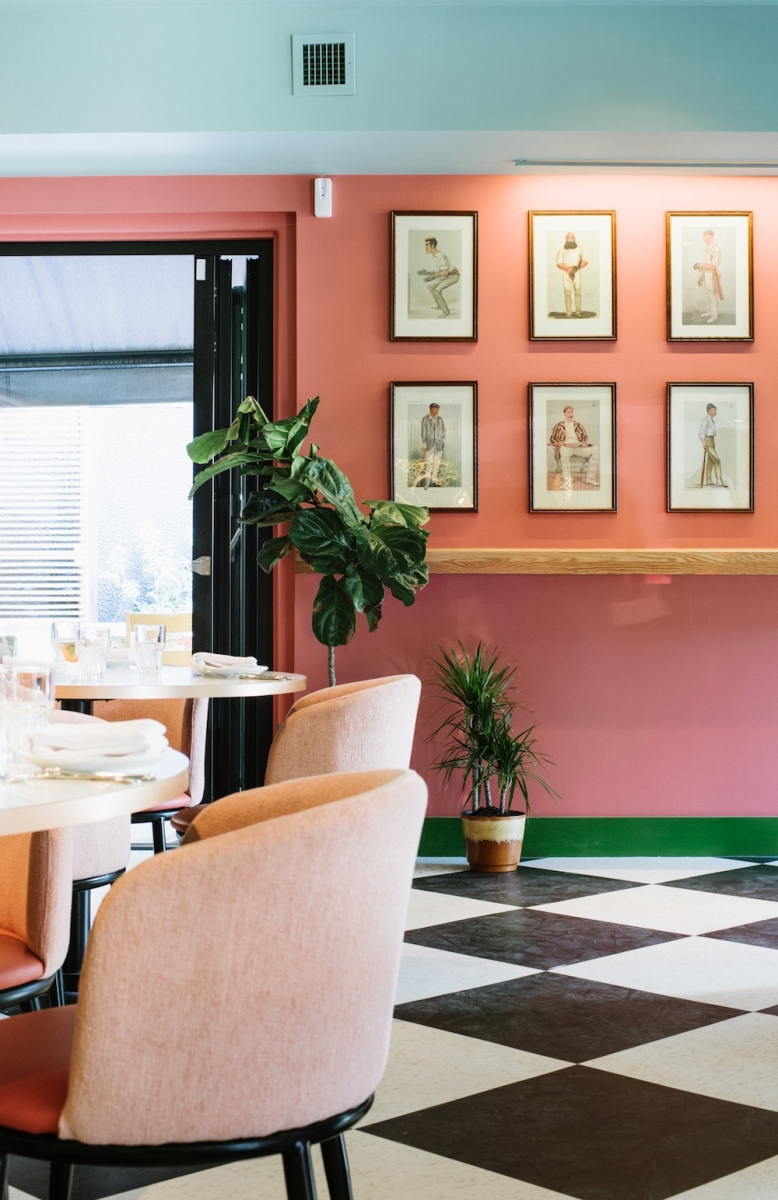 “[These prints are something] that came into the space really early. [Co-owner] Shovik found those on Ebay. They’re actually from Vanity Fair and they are the original prints from the magazine. Some of them date back to 1878 and they’re all illustrations of cricket players from the 1800s,” says Gohill. 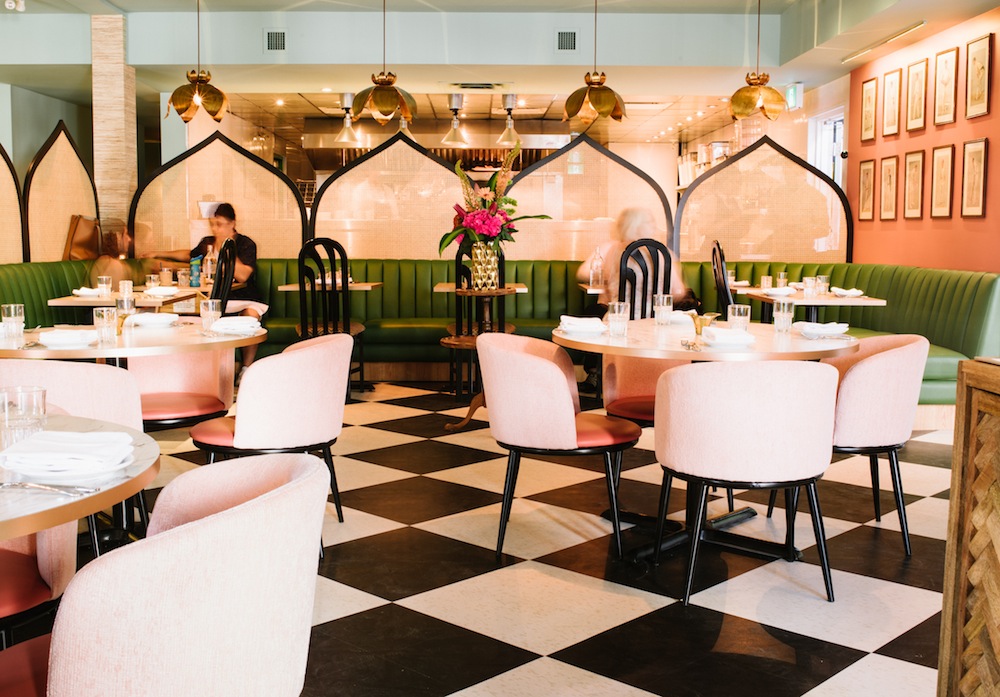 This curved banquette area is one of Gohill’s favourite parts of the restaurant. In addition to the green banquette, the area features vintage chairs that the team got from a Kijiji seller in Cochrane. The chairs were then painted and re-upholstered. The shape of the gold lotus flower lights mimic that of the rattan screens (which Gohill says are are a common shape in doors, archways and windows in India) that separate the kitchen from the rest of the restaurant.

But according to Gohill, it wasn’t always the plan to have an open kitchen.

“In the earlier stages, there was a wall there,” she explains. “Initially, we were going to use that wall to put the wallpaper there or make it a feature wall for art. But one of the things that Cody mentioned and I later agreed with is that most restaurants that we love all have an open kitchen. There’s something about the kitchen being visible and you hear the noise – it just adds such a vibe and flavour to the restaurant that we wanted to keep it. But the option of having it just open also didn’t work in my eyes because the ceilings are so low and I didn’t really want to build the banquette up so high.

“So the idea for [the rattan screens] came from a really odd place. I was looking on Kijiji – I think I was looking for furniture – and I came across these headboards that were made of wicker. And I thought oh, what if we could get wicker headboards and fashion them as partitions. Of course that wouldn’t work, so we got them custom made, but that’s kind of where the inspiration came from.” 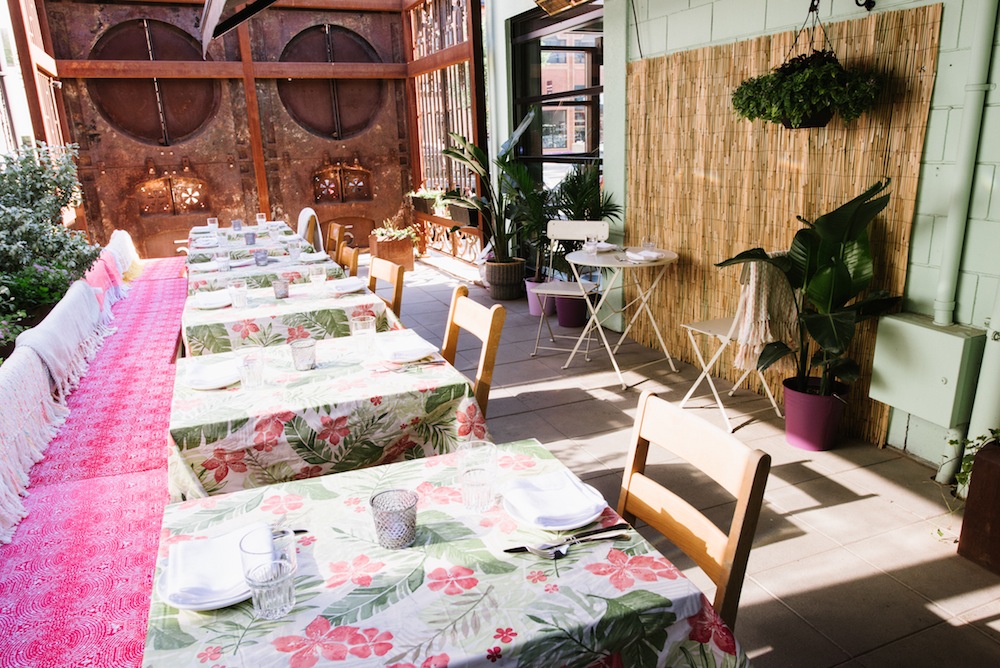 Gohill also designed CCC’s two patio spaces. There’s a 10-seat front patio that looks out onto 17th Ave. S.W. and a 50-seat side patio along the east side of the restaurant, which is separated from the sidewalk by large cast iron boiler doors.

“The idea was to carry the inside out to the outside, so the patio has a similar concept of a vintage, tropical, Indian space. We wanted to use a lot of rattan, wicker and colour,” says Gohill.

“Johnny and Cody built that long banquette that runs the length of the patio like a week prior to us opening. It’s so serendipitous how everything happened, like managing to find exactly 11 seat cushions that would match the blankets and the vinyl covers that we bought for the tabletops. I just kind of sit back a little bit and think wow, there has to have been some kind of greater force behind this whole thing.”