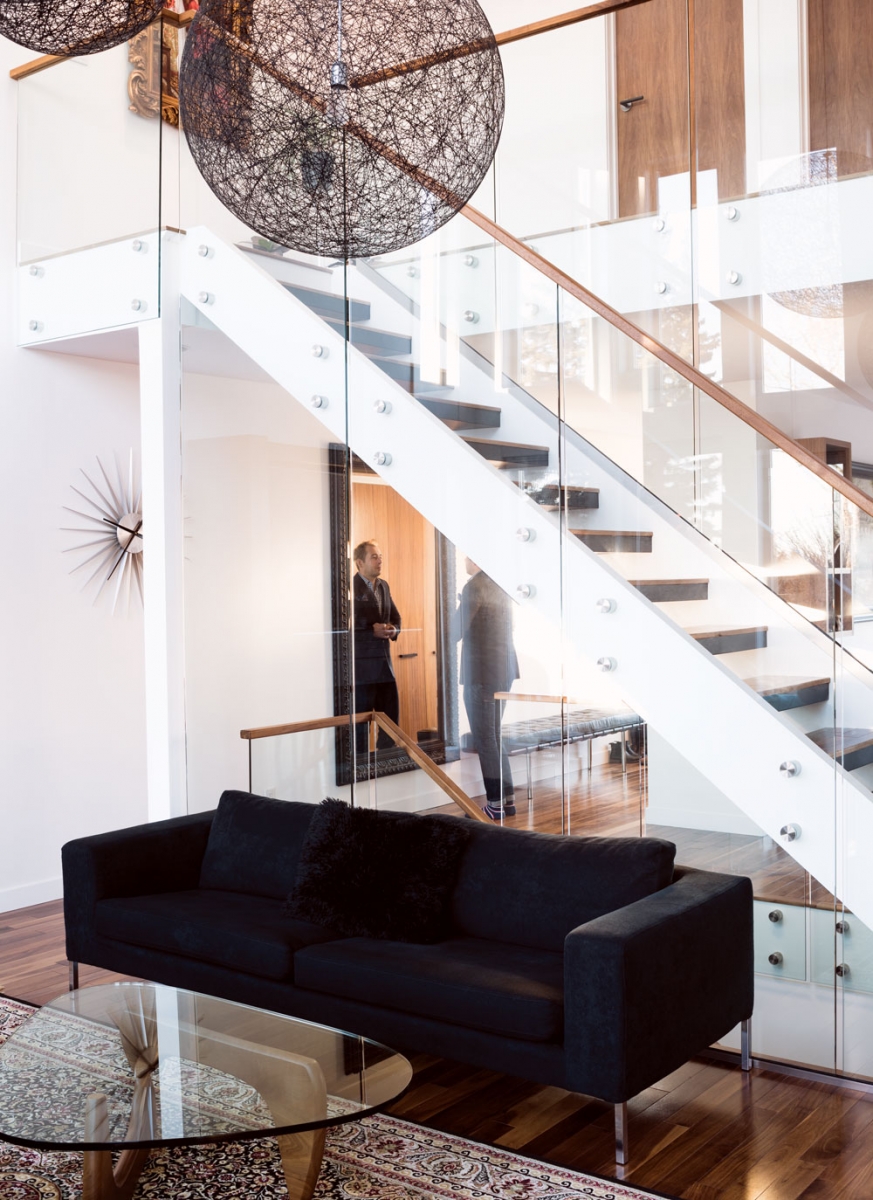 The home’s open floor plan is punctuated by a glass-walled staircase.

When designer Shane Rennie and his wife, Nilo, began planning to build their Marda Loop home, they knew they wanted to keep things simple.

“There’s a lot of black in this house,” says Shane. “We’re very fond of black right now as an architectural feature.”

As the co-founder and principal of Rectangle Design Inc., Shane feels passionately that architecture should always speak louder than colour. “I have a little statement that I give to clients when they want to do a feature wall or they want a ‘splash’ of colour,” he says. “I say that the architecture is going to be good enough that we don’t need to use paint.”

The Rennie family moves frequently – they estimate at least once every 18 to 24 months. This gives Shane and Nilo the opportunity to see how new trends can work for day-to-day living, and try out customized features like the striking glass railing system on the staircase and the black backsplash in the kitchen – all features that can be incorporated into future Rectangle homes.

“In this house, we wanted to have a warmer feeling,” Nilo explains. “And that’s what everybody says when they come to see it. It’s like, ‘Oh! This is so different! It feels a lot warmer.’ I think it’s because of the black.”

The Rennies have been in their current home since October 2013, but they already have an idea of what features they would like to bring forward into their next move. “For the next house, I want absolutely no colours, even in the kids’ bedrooms,” says Nilo. “It’s all going to be white or grey or black. If you stick to your greys and whites and blacks – just kind of muted colours – I think you can live with it a
bit longer.”

A family on the move

Homeowner and designer Shane Rennie loves to use his own homes to try out new design features and showcase his company’s innovative work.

“This house is pretty indicative of the work we’ve done these days,” Shane says, noting the expansive double-height ceilings and unique open staircase. But he is always excited to move on to his next big project.

Even though they only moved into their bright and modern Marda Loop home 17 months ago, the Rennies are already ready to sell the house. “I think in most relationships, they would maybe have an argument over it, or they would take a long time to come to grips with it,” says Shane.

Fortunately, Shane and Nilo are on the same page when it comes to embracing change. “We get antsy,” adds Nilo. “We get antsy to get building something new, something different.”

Shane agrees. “Everyone needs a place to live, and it’s awesome living in a house that we’ve created,” he says. “But once everyone’s seen it, then it’s done.”

Shane’s teenage daughter and the Rennies’ younger children – aged six and eight – have also learned to go with the flow. “The kids get it. We’re not uprooting them from their school or their community or from their life,” says Shane. “I love the idea of following the design process right through to the end, and I think the whole family likes that, too.”

Raising kids with an eye for design

The youngest Rennie children are already developing a firm sense of style.

“Our children know about design,” says Shane. “Even when we travel, we’ll always try and stay in a different hotel that’s got some sort of unique architectural character. We took the kids to New York this summer. My mom thought we were insane to take a six-year-old and an eight-year-old to New York, but they loved it.”

Creativity runs in the family

Shane and Nilo’s young children are developing a creative eye for design. “When we go to someone’s place, they definitely comment on their house. They’ll totally critique it,” says Nilo.

A vision for the future

“This is really idealistic, but I love the idea of one of our kids taking over Rectangle and being that person who sees Calgary make that big shift to the cultural centre that it will become,” Shane says. “It’s a true metropolis now, and I hope our kids stick around to see that. It’s going to become a really cool place.”

What is the feature in this house you are most proud of?

“I love the deck. I built the deck myself, and it was a monumental task!”

Do you purposefully design spaces with entertaining in mind?

“The trend is to gather around the kitchen and have people over. All of our projects are geared toward being able to accommodate a larger group. Even in a condo, they’re going to have a dinner party with six to eight people. They want their friends to know that they’ve got good taste.”

“I don’t think there’s such a thing as a perfect house. In fact, I know there’s not, because I build a lot of houses and I work with a lot of clients that are trying to achieve the perfect house, and I’ll tell them it’s impossible. Even if we had an unlimited budget and unlimited land, we’re still not going to be able to build the perfect house.”

What do you want your kids to take away from living in the way that you do, and the style of your homes?

“I talk in the office all the time about Rectangle being a 100-year company. I want it to be around for a long time, and I love the idea of one of my children getting involved in the business. I feel like all three of them are more creative than we would have been growing up.” 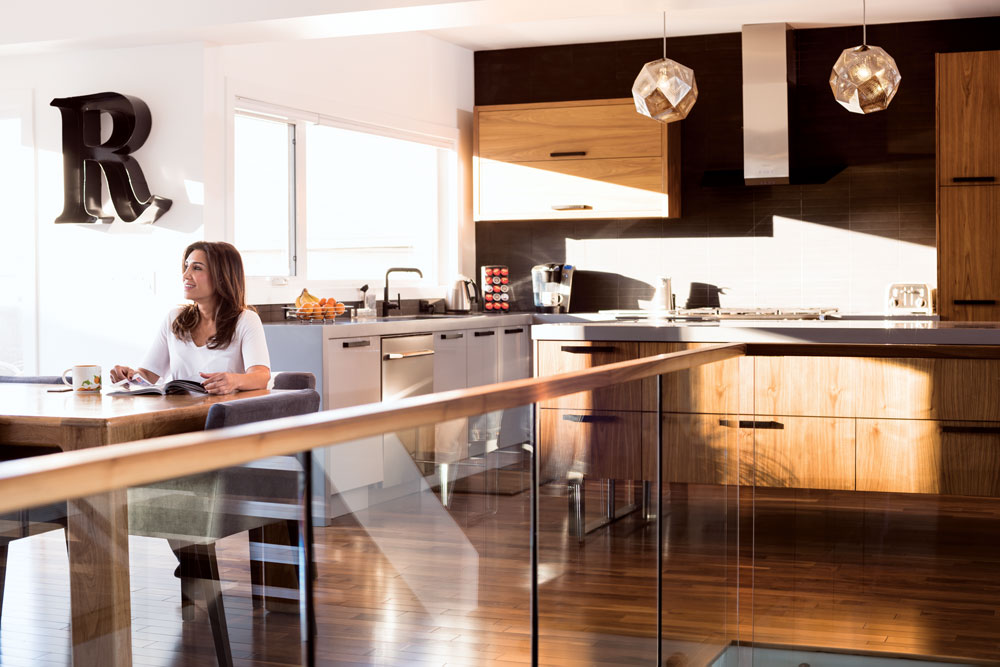 Homeowner Nilo Rennie sits at the family dining table, which was custom designed by her husband, Shane. 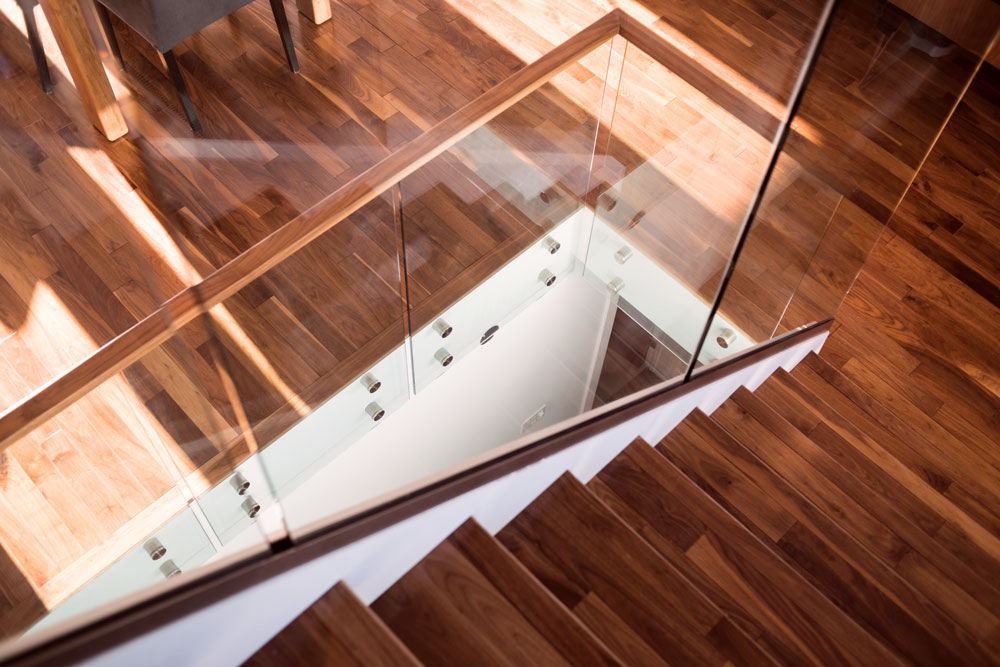 The use of glass wall panels and the same wood flooring used throughout the home creates a sense of openness, yet feels safe in a family-friendly home. 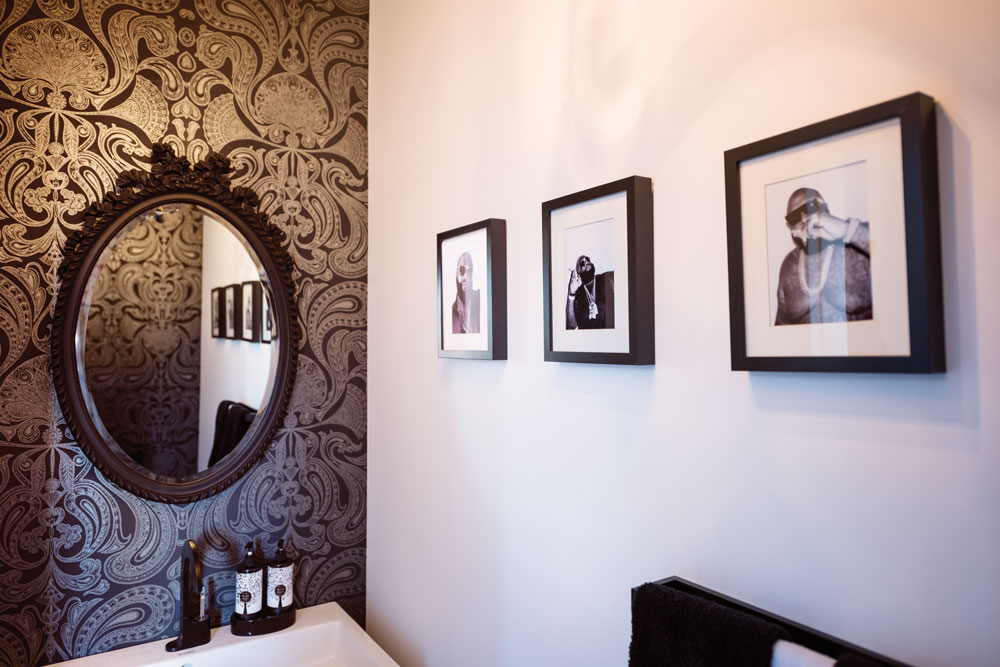 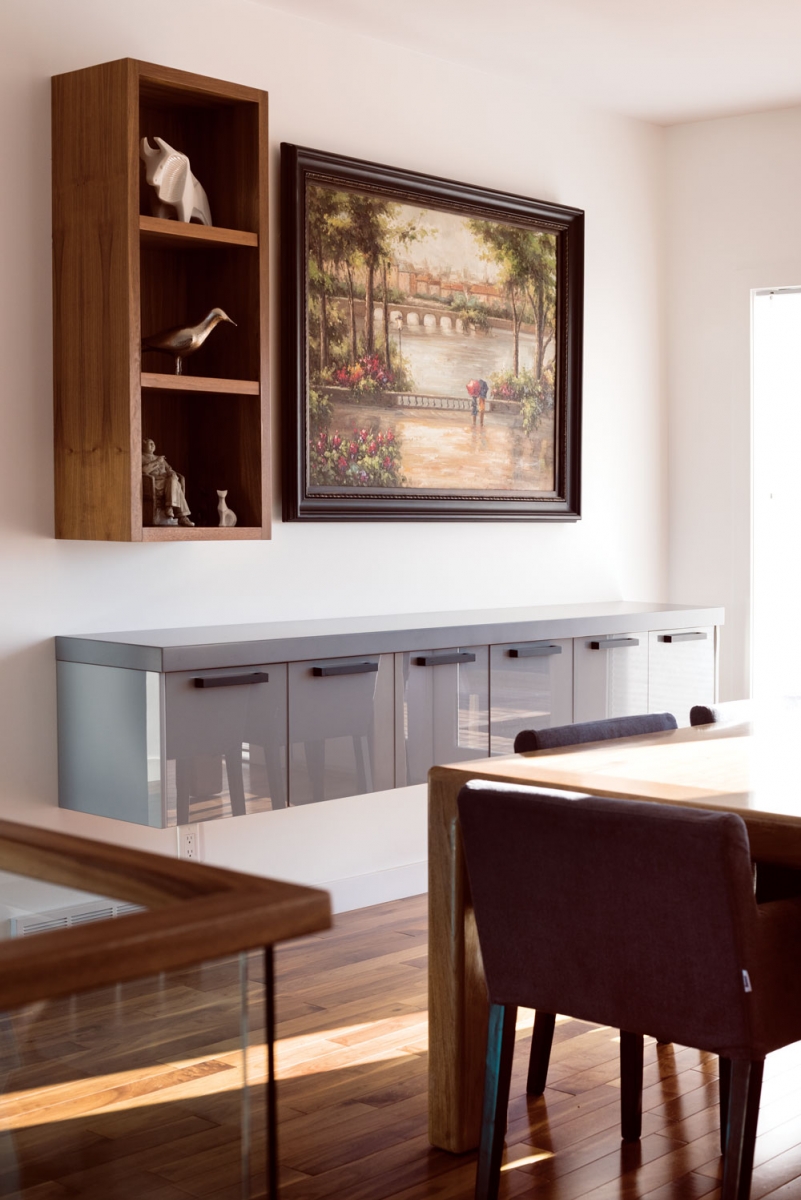 Custom shelving and a high-gloss buffet in the dining room float on the wall, further enhancing the home. 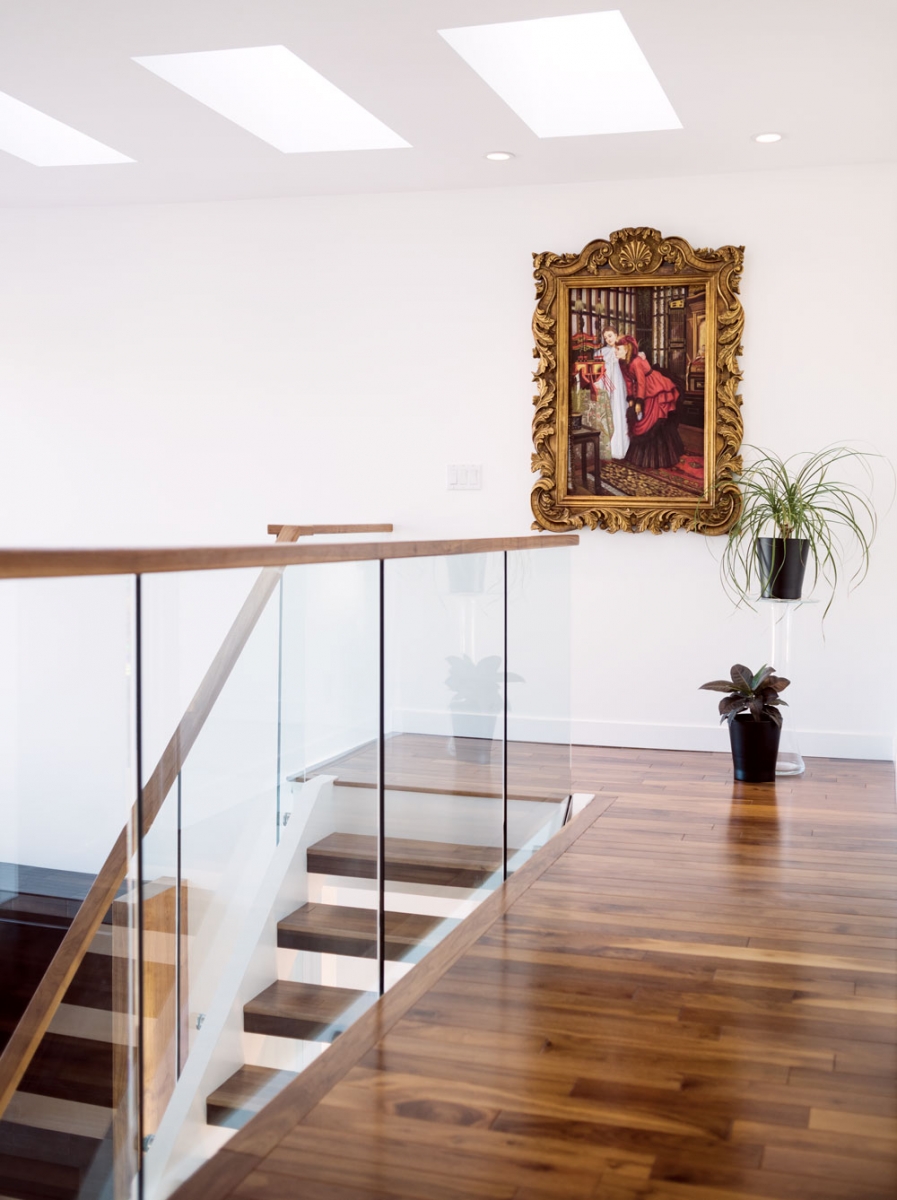 A display of art and potted plants on the second-floor landing strikes the right blend of quirky and minimal. 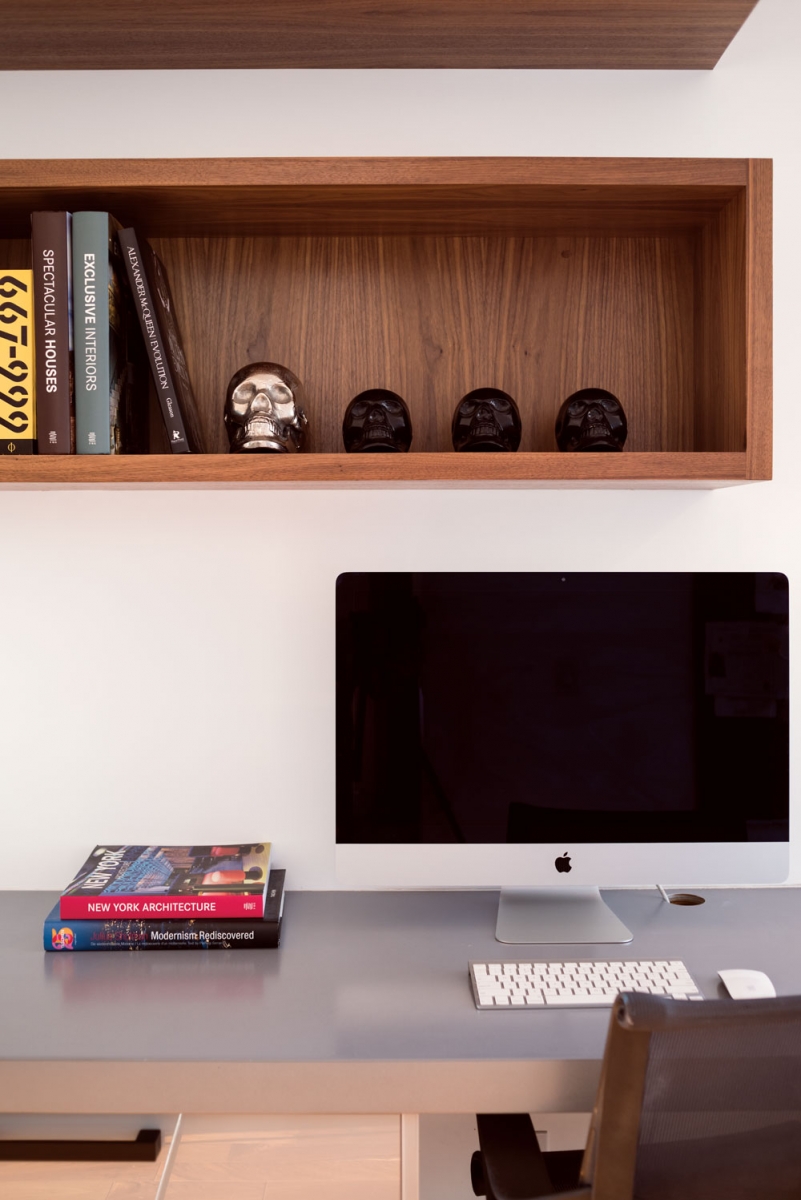 The clean and uncluttered workspace features a custom-designed desk and shelf by Rectangle Design. 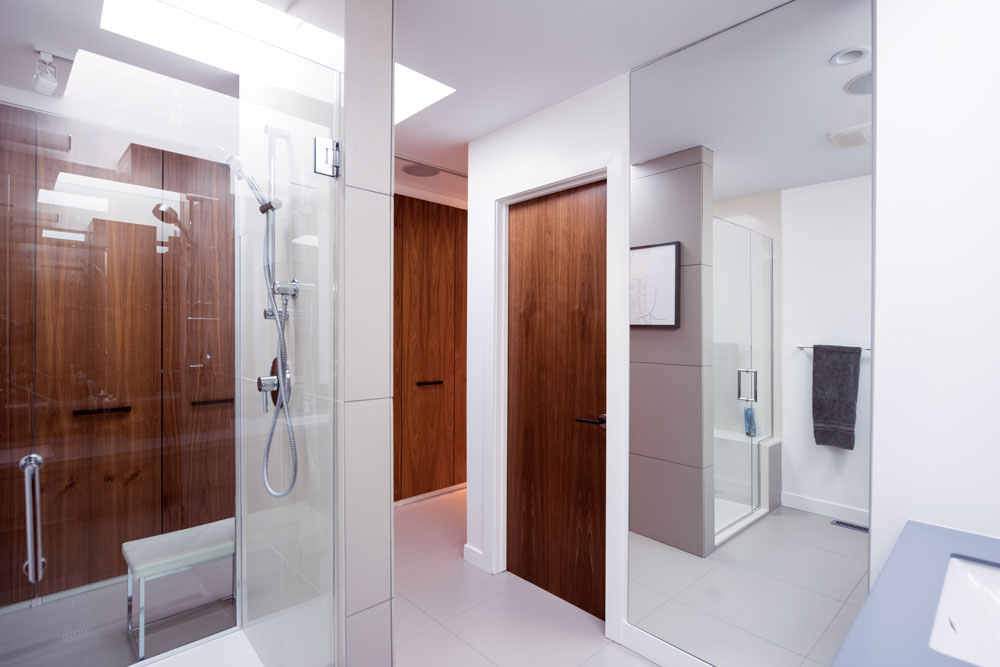 The spa-like bathroom is flooded with natural light thanks to one of the home’s many skylights. 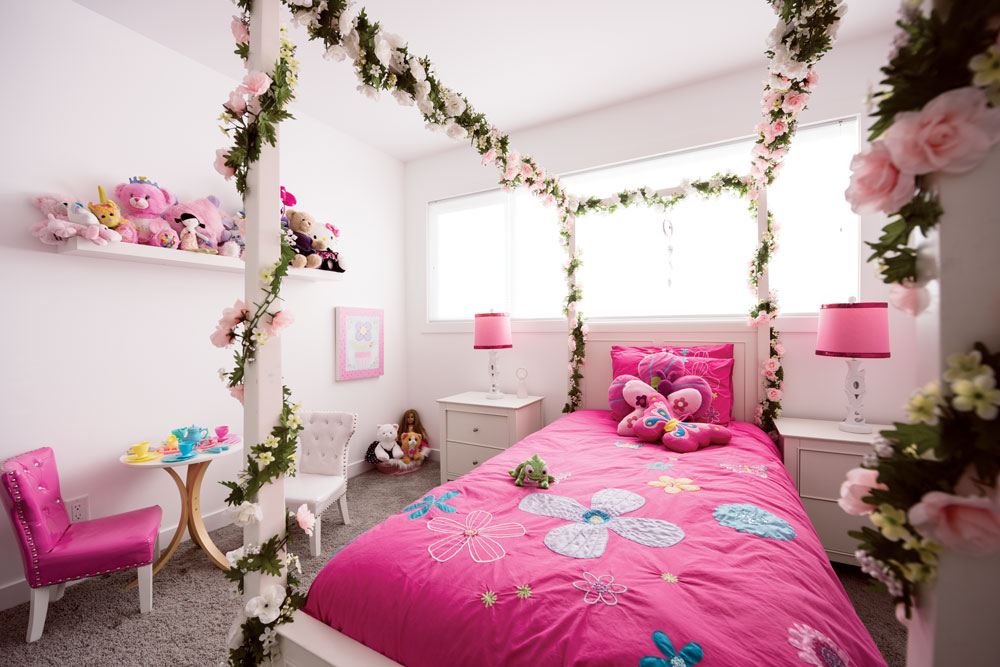 While most of the home is a study in clean lines and simplicity, the children’s bedrooms are reserved for the expression of personal style. 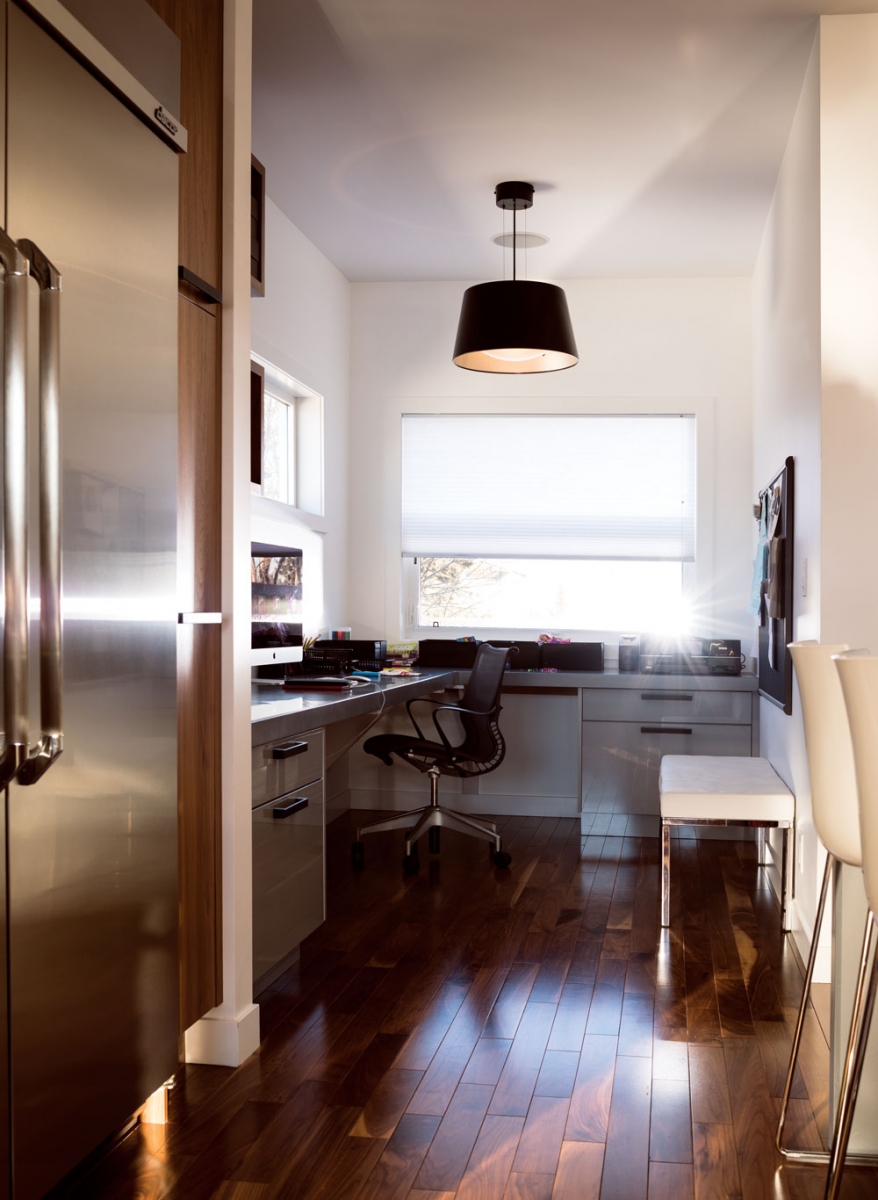 Pendant lamp lighting saves room in the small office located next to the kitchen. 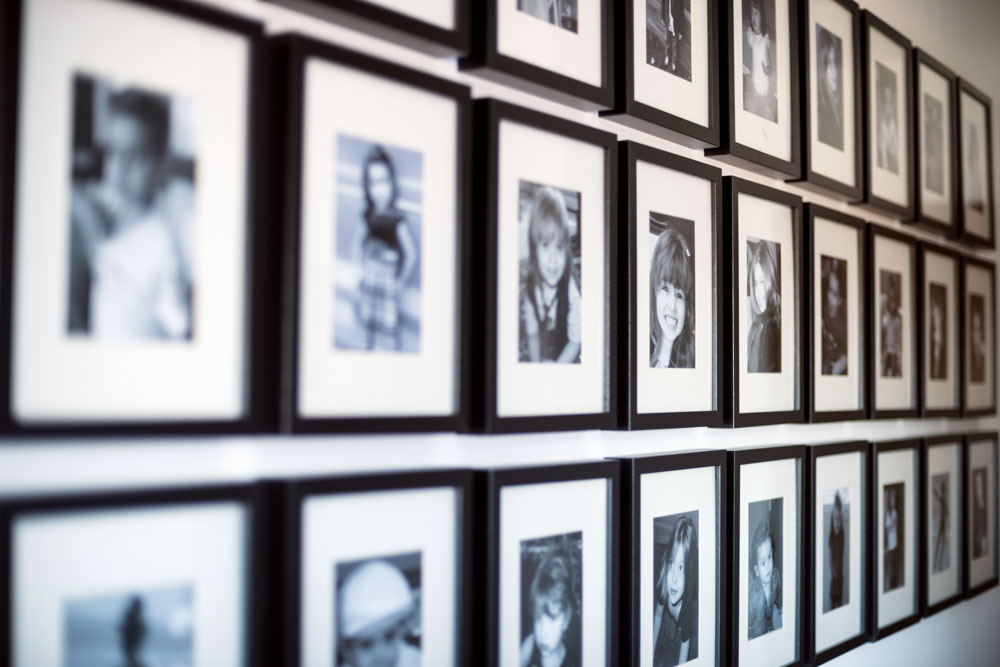 A feature wall of iPhone photos in inexpensive frames was inspired by a hotel the Rennies stayed at in Miami.

This article has been changed from the original published version to reflect that Rectangle Design custom designed rather than custom made certain built-ins and furnishings.