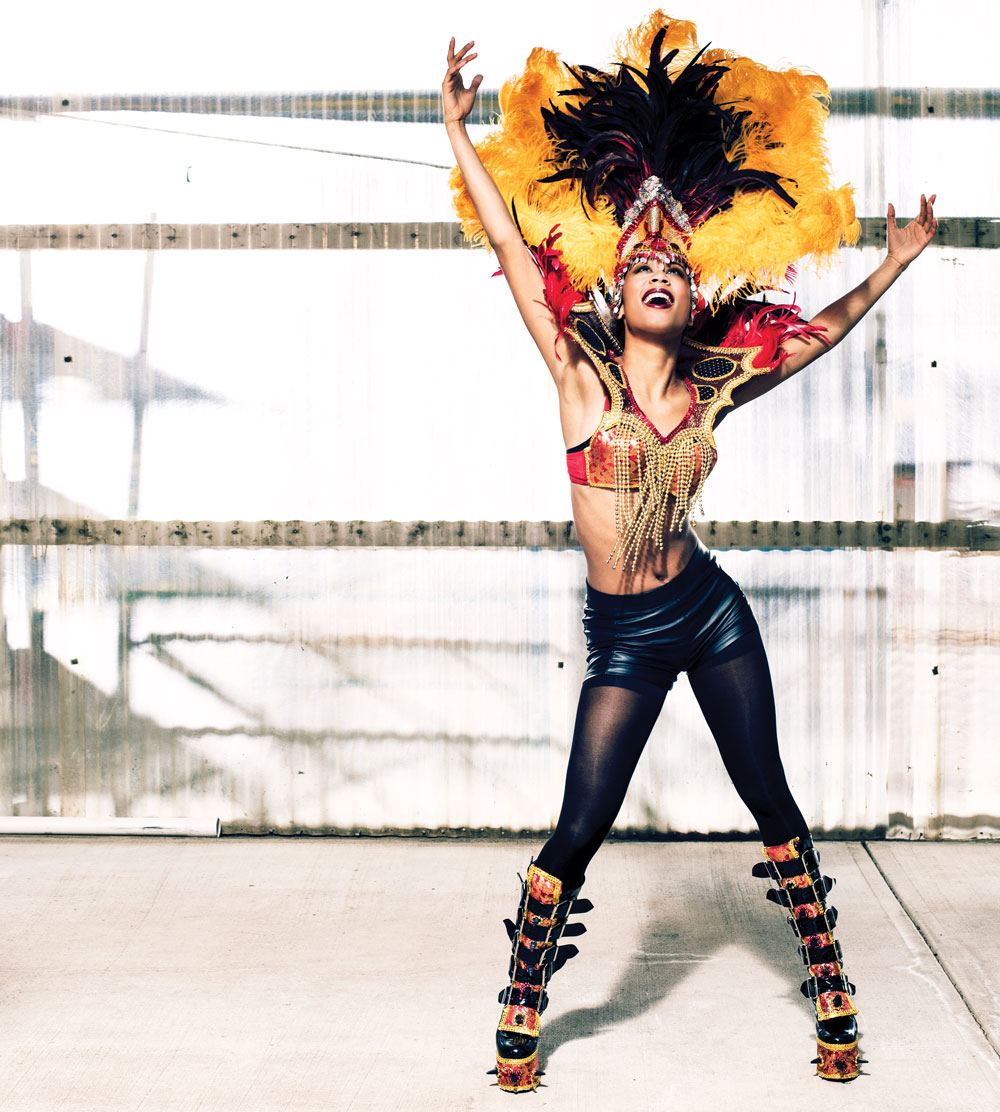 Interview and styling by Aldona Barutowicz; Hair and makeup by Kate Barutowicz; Shot on location at Golden Acre Garden Sentre

When you go to Decidedly Jazz Danceworks, it’s difficult not to feel excited about what’s waiting behind the studio doors, especially when you’re en route to a dance class led by Sabrina “Naz” Comanescu. The instant she presses play and begins to move, you can’t help but do the same.

As Comanescu puts it, her body is her voice, and, once you hear her life story, it quickly becomes apparent that dancing has always been her destiny. It’s etched into her bones and muscles, and perhaps even into her curly mane. When she moves, Comanescu truly comes alive. “I’m being heard the clearest when I’m dancing,” she says with a huge smile as she relaxes with a cup of coffee between classes.

Although she was born and raised in Calgary, with the help of her family, she has been able to stay true to her Trinidadian and Romanian roots, with dancing at the forefront.

Although her dance career had a rough beginning – Comanescu claims she had two left feet at the start – it wasn’t long before she found her groove. Shortly after completing high school, Comanescu approached established dance schools in the city to inquire if she could run her own classes. It was a bold move, but she was confident there was a place in Calgary for her unique dance style. It was a success, and, as a result, she was instrumental in introducing soca and dancehall dance styles to the urban dance community, both of which draw from her Caribbean roots.

She has since established her own art collective, Casa de Naz, and has joined forces with friends and dance colleagues to form the dance group The Bad Girls Club YYC. She currently works with Carifest, Calgary’s Caribbean Carnival, to help spread the vibrant culture beyond the immediate community.

How do your many endeavours influence your personal style?

Can I dance in it? That sounds terrible, but sometimes, when I go shopping, that’s what I’m primarily looking at. Since I dance seven days a week, my wardrobe is made up of pieces that compliment that lifestyle, with a lot of activewear. When I’m not dancing, though, I usually try to go for pieces that are stunning and different.

My style is influenced by the dance that I’m involved in, so I love to incorporate African print, a lot of tribal and colourful pieces and sometimes the exact opposite, with a lot of solids and blacks. It also depends on how I’m feeling, and I can be a bit all over the place.

Where do you shop?

I love to shop a lot when I travel, so there’s a lot of saving up before I head out, so I can buy the pieces that no one has seen here yet. I love to shop at places like Union Square in New York – the vendors and the small shops are amazing, and that’s what I go crazy for. 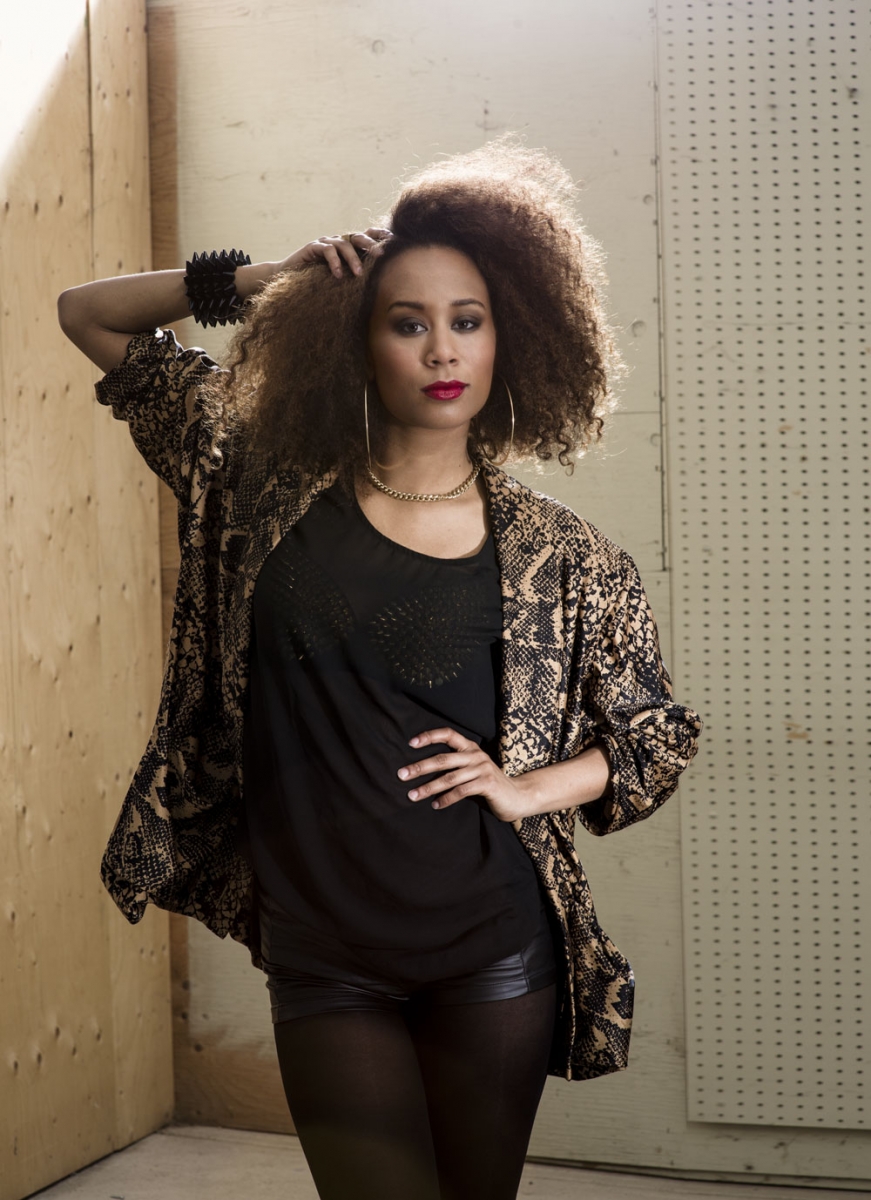 How has your style evolved?

I think I’ve always had a vibrant streak in me, but it’s coming out more now. I’m a bit louder with my choices and colours, and I just go for it. Let’s throw on some dark lipstick and see what happens. In the Bad Girls Club YYC, they always have me in a blonde or black bob wig, so you never know.

I am a dancer in that group with Vernon Rubiano and my good friend, Tony Tran, who is the artistic director, and it’s his way to bring voguing to Calgary. We are such a booming and filled-with-potential city; why can’t we have a scene like that here, right?

You’re directing an art collective. What is this project?

It’s called Casa de Naz. I really wanted to form something that brought movement, fashion, video and music all together. I’m playing around with a few things and started by asking a few friends who I think are groovy to work with me to put together choreographed dance videos on YouTube. By making them available to the community, I was surprised to see there’s a calling. This led to the University of Calgary asking me to perform for their African Students’ Association events. 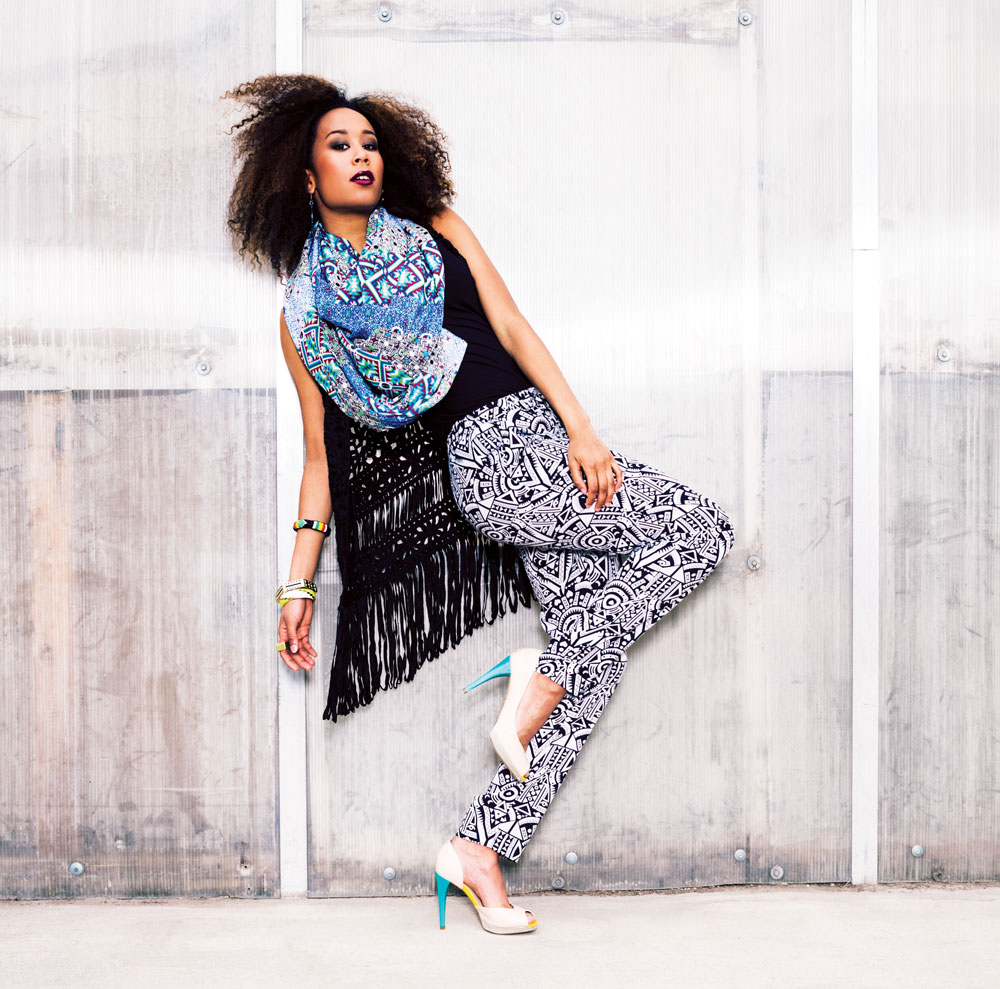 Printed pants and tank top from H&M; fringed vest from Forever 21; shoes from Guess; scarf is a piece of fabric used for a costume.

How did you get into dance and what has been the evolution?

My mother is a choreographer and artistic director of her own performing arts group, Diversity Performing Arts Club, which is where I started dancing, and I’m currently teaching there, too. I was performing more within the community, doing funk, soca, reggae and dancehall, and, in junior high, I went back into more classical dancing, where I explored ballet and jazz.

I got accepted into the performing arts high school, Central Memorial, and was able to do a lot of different shows. I did a musical cabaret, which was a lot for someone who was only in Grade 10, but it was fun and a great learning experience. After the cabaret, I did a show with a lady named Saxon Fraser at the Slammenberry Jam Hip Hop Dance Festival, and this opened up the door for another big show, Addicted, with the House of Dangerkat. We premiered the show in Tribeca [in] New York, and performed it in Finland. After that, I travelled to Romania and Trinidad and, upon my return, I started teaching dance professionally.

How long have you been affiliated with Carifest?

I’ve been attending for a long time, and I’ve performed for years in the parades and festivals, but for the past two years it’s been the most official. I’m now their social media gal. I’ve taken the extra step to make promotional videos and tie my classes into the festival, where I led my first flash mob. We showed up at Chinook Centre and just went for it.

What are some of your dancing career highlights thus far?

Releasing my inhibitions has been a highlight, because now my work ethic in class has changed, and that allows me to become a better dancer. I enjoy the realness and vulnerability dance brings out. My body is my voice; dance is how I connect with people. Also, there’s so much more to learn, and I feel that through dance and the arts there’s so much to gain. 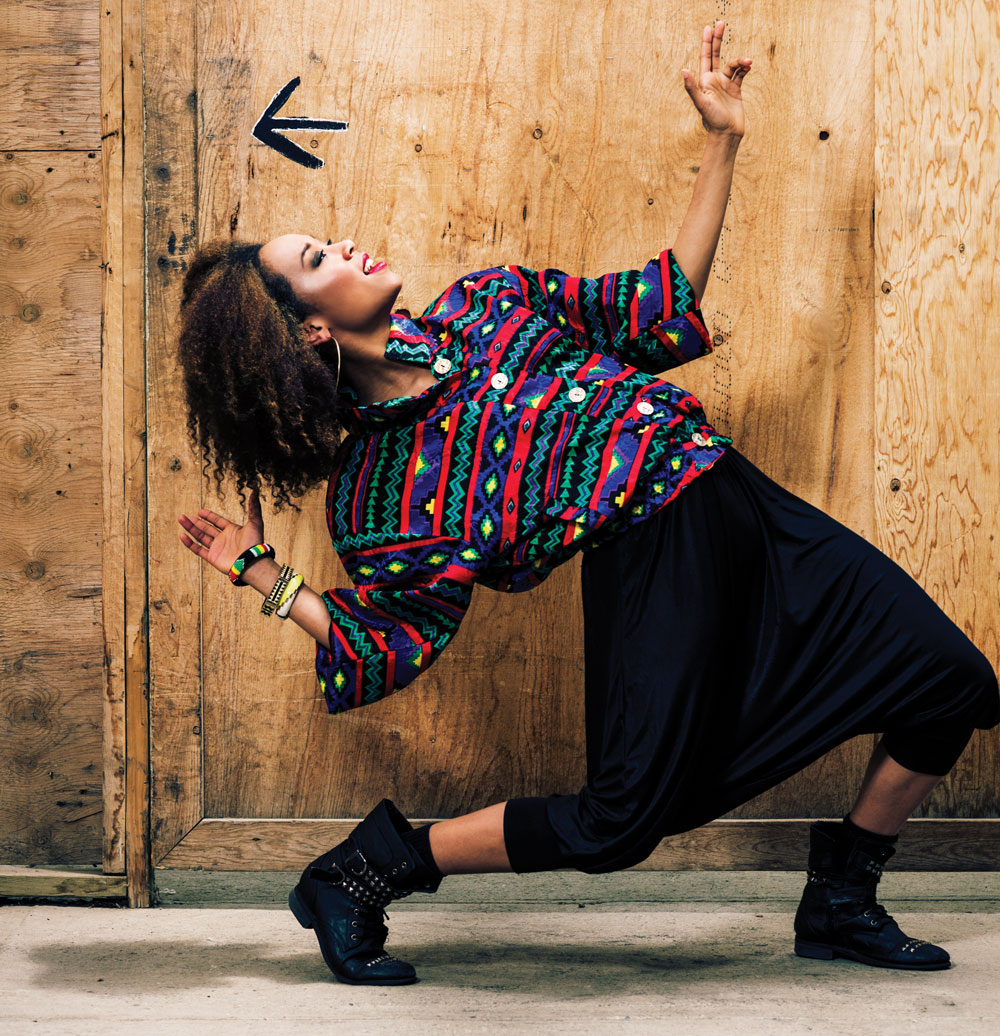 What are the biggest challenges for you as a dancer?

I specialize in something that is so brand new, and sometimes, as a teacher, it’s hard to sell it to people because they just don’t know. I have to start with the beginning, from explaining the history and culture, to how this dance genre has evolved.

Besides teaching there, I’m also currently a full-time student in Decidedly Jazz Danceworks’ pre-professional training program, where I’m taking jazz classes. So, because I’m so eclectic in my natural movement style, taking classes in a different style and learning how to drop out of my craziness into something that is structured can be difficult.

How has your own culture influenced the choices you’ve made?

The arts were one of the main ways that my mom and dad kept our culture and traditions alive for us because they came to this city not knowing anyone. The community became my extended family, and dance was a big way for us to get involved and to celebrate where we came from. Just knowing that the best way for me to express myself is through dance, and teaching these dance classes, is a great way for me to learn more about who I am and where I come from.

Have you ever suffered from feeling like you did not belong to a specific community?

Yes, I think more so in the Romanian community, due to the language barrier. I went to Romania for the first time two years ago and it was such an experience. What I really enjoyed was the feeling of being home, in a way. When I go to Trinidad, I see people that look like me, that sound like my mom, but, in Romania, I don’t look or sound like anyone there, but what I love is that there was still that feeling of “This is a great place for me to be.” 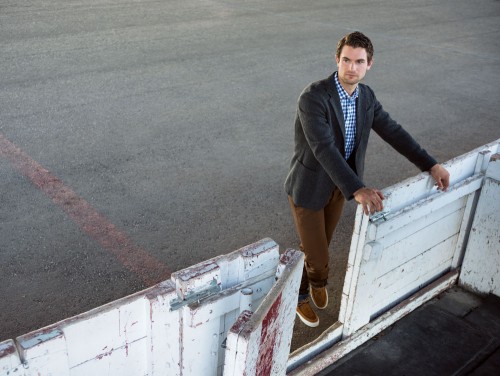 Vintage jumpsuit; multicoloured leggings were a gift from a friend; belt, clutch and earrings from H&M; boots from Sirens.

Have you experienced racism?

I straightened my hair in junior high and suddenly I had a million friends. But then the day I went natural and curly with my afro, people were like, “That looks different and I don’t really know you anymore.” There are those little things, which kind of play on your self-esteem, but then you leave junior high and you move on. Nothing ever made me feel ashamed or made me feel like I wanted to alter who I am or my image. Nothing broke me. I feel like I’ve been blessed to grow up here, and I’m comfortable with who I am.

What do you love the most about your job and life?

I love that I can see the light at the end of the tunnel, in the sense that you just know things are going to work out, and I’m trusting that feeling. I’m enjoying the ability to surrender, and trust in the universe. I love the fact that I’ve been given this opportunity to dance. I’ve found something, I have a niche. Art and I are good friends.