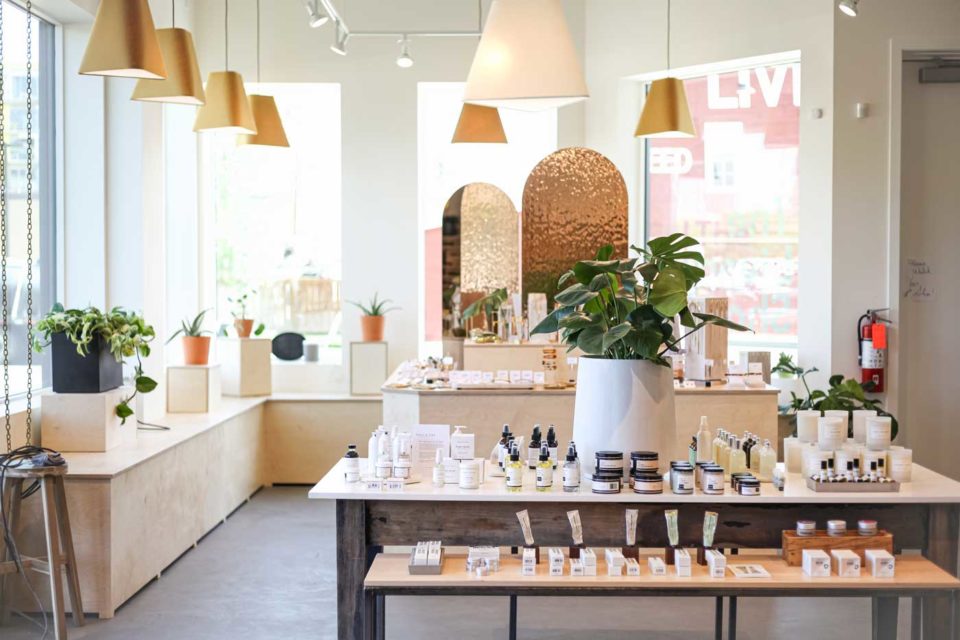 There is no other building quite like the bright red East End Livery barn in Inglewood.

Built beside the historic National Hotel in 1909, the barn used to be a livery stable for the horses of the hotel guests next door. Now the last of its kind in Calgary, the barn has found new purpose over the years as an auction house and a filming set for the TV show Canadian Pickers.

Since late 2014, it’s been the home of The Livery Shop, a store anchored by local fashion brands Camp Brand Goods and CoutuKitsch. The founders of those two companies first met as fellow vendors at Market Collective and decided to move into a studio workspace together. The East End Livery barn became that space, and the team says the barn’s white “Livery” lettering actually inspired The Livery Shop’s name.

Originally, the team thought The Livery Shop’s retail element would be by-appointment only, but they soon expanded to full-time retail hours due to customer demand. Over time, the team also brought in additional local, Canadian and international brands, becoming a popular shopping destination with its mix of outdoorsy and urban products.

But in 2017, The Livery Shop’s lease was coming to an end just as the team was needing more space. Thankfully, the solution wasn’t far away — their landlord ended up building a brand new building directly across from the barn with plenty of room for The Livery Shop on the main level. Video game developers New World Interactive will be the building’s only other tenant on the second floor.

While co-owner Connor Gould admits they’re feeling “a mixture of excited and terrified” over leaving The Livery Shop’s first home, the timing is right for the growing shop.

“We’d really kind of outgrown that space, not really allowing ourselves to think it,” Connor says. “This [new store] really allows us to expand what The Livery Shop is and our idea of what it’s going to be. It just really allowed us to get in at the ground floor and design a space that really suited our needs. The fact that our lease ended was kind of a blessing in disguise because we got to move into this space.”

While the new building looks and feels very different from the red barn, it’s got just as much character. MoDa, who was behind the building’s architectural design, has made it an instantly recognizable Inglewood landmark thanks to the distinctive peaked roof. One particularly interesting detail is how the bricks sticking out of the building’s north wall line up to form the silhouette of an A-frame building. The shop’s west-facing garage door, which will be open when there’s good weather, leads to a multi-use outdoor space surrounded by a steel frame.

And then there’s The Livery Shop’s new store itself. Inside the store, high ceilings and big windows give the space a bright, airy feel. The team at Salt Design (who are also the owners of Workshop Studios) worked with local designers to create elements like the store’s benches, jewellery displays and front counter. Salt Design also made the gorgeous handmade tile mural behind the front counter.

The 2,000-square-feet of retail space in the new building is also more than double what The Livery Shop had in the red barn. While Camp Brand Goods apparel and KoutuKitsch jewellery will still be the shop’s core brands, they now have room to grow their other offerings too — they’ve already expanded the shop’s menswear section and brought in new apothecary products, ceramics and more.

While the red barn has become intrinsically linked with The Livery Shop over the last few years, the new store space promises to be an equally memorable home.

Here’s a look inside The Livery Shop’s New Store

Dorian Kitsch and Kofi Oteng of CoutuKitsch and Leslie and Connor Gould of Camp Brand Goods are the two couples behind The Livery Shop. Salt Design created the beautiful tile mural behind the front counter.

The new store is filled with natural light thanks to plenty of windows and a large garage door along one wall. Shoppers will find beauty products from Ontario-based Wolf & Pine and Toronto-based Leaves of Trees, as well as jewellery by Calgary’s own CoutuKitsch.

A closer look at some of CoutuKitsch’s jewellery.

The Livery Shop hopes to grow its footwear selection in the new space, which you can check out on this shoe display made of heritage bricks. Take a close look and you’ll see the word “Calgary” on the bricks.

These concrete and wood benches inside the shop were made by Edmonton’s Rypot Design and Calgary’s Yarko Yopyk.

The shop is filled with apparel, purses, hats, socks and more from brands like Levi’s, Patagonia and Mat & Nat.

And of course, shoppers can still choose from a selection of Camp Brand Goods’ locally designed toques, sweaters and shirts.

The new building’s distinctive peaked roof adds some extra character to Inglewood’s skyline. According to Connor, the multi-use outdoor area underneath the steel frame on the right will have a Turfstone floor and should be completed in about a month.

If The Livery Shop team or shoppers ever get nostalgic, they can just look across the street for a reminder of where it all began in the East End Livery barn.