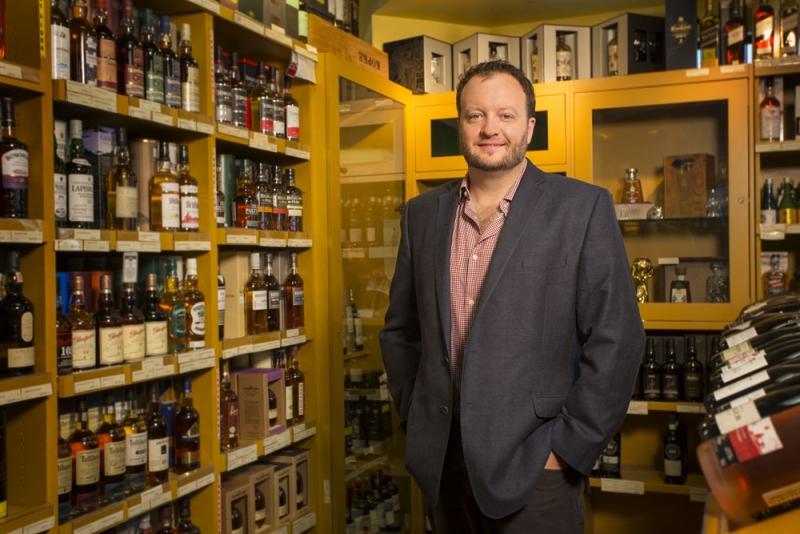 Kensington Wine Market has come a long way since it first opened in 1992, prior to the privatization of liquor retailing in Alberta. Back then, KWM only carried wine. But when the Alberta liquor industry became privatized in 1993, they decided to make the change to a full service liquor store.

“The decision was made well before I even started there, but it was made because Kensington Wine Market had already become a neighbourhood shop,” KWM owner Andrew Ferguson says. “Although we were a destination shop for a lot of people in Calgary and further afield, that neighbourhood part was an important one and we wanted to be able to sell our customers everything they wanted, not just wine.”

The decision paid off. Today, KWM is well-known in Calgary and across Canada for its huge selection of wine, beer, whiskey and other spirits. It’s also developed an international reputation for its whiskey selection and expertise. Ferguson, who got his start at KWM as a delivery driver in 2003 and became the owner in 2015, has been a driving force behind the store’s whiskey growth. He says that last year, the market sold 1,400 different whiskeys.

This year, KWM reached a major milestone: 25 years in business. The store is celebrating with events, sales and special product releases, that will extend into the fall.

“We’re really gratified by and grateful for the 25 years of business that we’ve had in Calgary and in the Kensington community. We know that we wouldn’t be there without our customers, our friends and our neighbours, so we’re very grateful to all of them for supporting us and allowing us to continue doing what we’re doing.”

Here are seven places Ferguson likes to shop at in Kensington

“There’s a little jewellery shop called Ingear. I’ve found a lot of cool things for my wife and daughters there. They sell more off-the-beaten-path accessories and knick knacks. So that’s a spot that, especially around Christmas, I spend a bit of time at.”

“Whenever I’m in trouble with my wife or I need to surprise her, they’re always very good at putting together a nice bouquet on short notice.”

“There are two coffee shops that I like going to because they’re both independent and local. There’s Kienna, which is one of the biggest roasters of coffee in Western Canada. They have a little coffee shop in Kensington so I like going to visit them. And the other one is Hexagon, which is a board game cafe. While I’m not personally a board game player, I do like the coffee they make there.

“My kids are a little older now, but one of my favourite shops in the neighbourhood has always been the toy store Livingstone & Cavell. I think it’s hard to have a cool toy shop that’s not just commercial and big brands. To be honest, I almost wonder how you can survive and do that in this modern world where children only want to see what’s promoted on television. But here you have this cool, independent toy store that has fun things – and fun things for adults, too. At Christmas, I don’t get to buy as much stuff from there as I used to. I have a couple little nephews and nieces that I buy things for. But I used to love shopping in there when my daughters were younger.”

“I’d be remiss if I didn’t mention Peasant Cheese, who’s located directly next to us. [Owner] Crystal has put herself on the map as Calgary’s best cheese shop. It’s a small independent outfit. She used to work for Janice Beaton back in the day and then decided to go out on her own. She’s bringing in incredible cheese and meat products that no one else in the city has. But one of the things she does that’s maybe not quite as well known is that she also makes sandwiches for lunch. For me, it’s great that we’re not only able to get cheese and charcuterie for our tastings there, but some of the best sandwiches in town are made in her shop. She makes a tuna sandwich for me with some premium tuna that she brings in and sells through her shop. If I’m having rough day or if I’m tired or stressed out, that’s kind of my go-to.

“I’m a mountain biker and recovering triathlete, so I love all things bikes. Ridley’s is one of the best bike shops in the city for sure. Even when I’m not buying a bike or upgrading my components on it, I love going in there and looking at what they’ve got. Next to books and liquor, bikes are my third passion. If my wife let me get away with it, I’d have a lot more of them than I do.”

“I love the food there. I don’t eat there as often as I’d like, but if I had a choice of eating at one spot in the neighbourhood, that would be it. I like their steak and frites. It’s probably my favourite thing. I would also shortlist the Brasserie and there’s a new Italian place called Cotto, which is really good too.