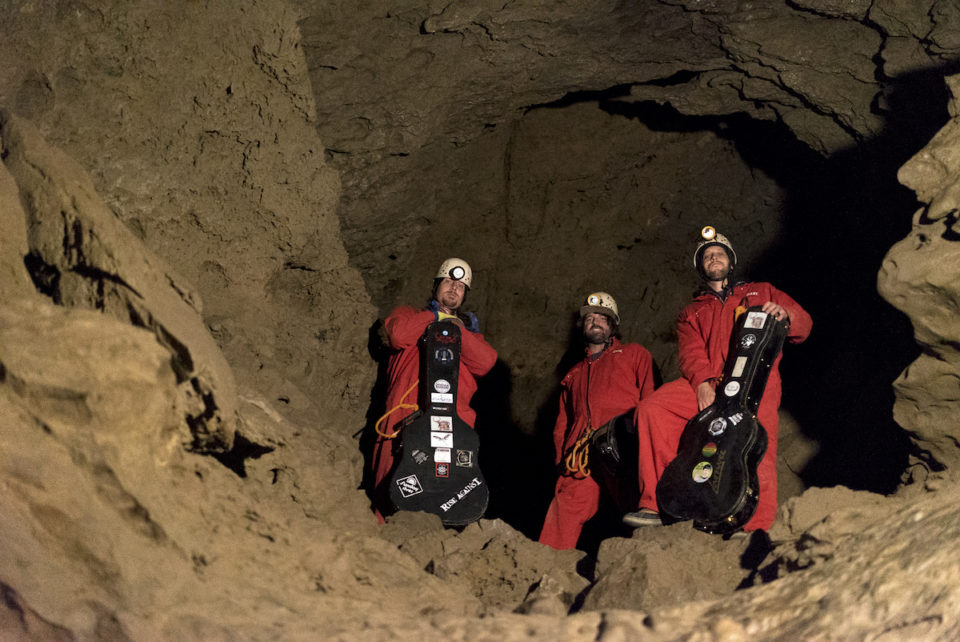 You’re a mean one, Mr. Grinch. But that doesn’t mean you don’t want to have yourself a little fun during the holiday season. If you’re developing a throbbing vein from all the “Jingle Bells” and frantic parents running through the mall like they’re being chased by a bloodthirsty killer, we have you covered with recreational activities that require no holiday spirit whatsoever. Even if you are feeling festive, this is a great way not to burn out on cheer before the big day comes.

See an action movie off the big screen with ATP

Local stage veteran Rebecca Northan directs and co-writes an an original work set in the Zorro creative universe. Zorro: Family Code sees the titular character undertake a transcontinental voyage by ship in pursuit of Capitán Juan Ramon. High-seas hijinks ensue and our hero meets someone he never could have expected — another adventurer going by the name Zorro. One person he definitely will not be meeting is Papá Noel. This show runs now to December 30 and is suggested for audiences aged 5 and up.

Enjoy dinner and a show at Stage West

If you’re looking to catch performances of classic tunes that aren’t about a red-nosed reindeer, Stage West’s production of Jersey Boys might be just the right thing for you. The epic, Tony Award-winning musical is full of excellent songs that don’t mention a snowman even once. Following the meteoric rise of The Four Seasons, the show opened in 2005 and pretty much hasn’t left the stage since. Dinner is included in Stage West’s pricing and its gargantuan menu ought to satisfy people of all palates and dietary restrictions. Jersey Boys is rated R and runs now until February 3, 2019.

Olympic FOMO got you down? Look no further than the free-admission Junior Luge World Cup at WinSport to cheer you up. Over 80 athletes from more than 15 countries will race down the track at speeds exceeding 130 kilometres per hour. This event runs December 14 to 15.

Go see live music in a cave in Canmore

Talk about underground music. Canmore Cave Tours is having a four-night spectacular of musical performances from December 14 to 17. Adventurers meet at its offices (129 Bow Meadows Cres.) and depart in convoy for Rat’s Nest Cave. You’ll then hike 40 minutes to the cave and use an array of climbing techniques to make your descent to the Grand Performance Hall. The musicians you can expect are The Silkstones, Elk Run & Riot, Trundled and Seth Anderson. Call 1-877-317-1178 to make reservations.

See a Canadian-made horror movie at the Globe Cinema

Think Mad Max but set in your own backyard and you’ll be halfway to wrapping your head around the glory of SuperGrid. The film, which debuted at the 2018 Calgary International Film Festival, takes place in a not-far-off dystopia where the mining industry has plunged the country into post-apocalyptic hellscape. The film is rated 14A and standard Globe admission rates apply. The film will screen nightly from December 14 to 20.

Red Bison Brewery was one of 15 breweries to open in Calgary in 2018. It has nearly hit the one year mark and will celebrate by inviting you to come check out a free tour of the facility. Space is limited and pre-registration on Eventbrite is encouraged. Available dates include December 15, 16 and 22.

Learn about Calgary’s gay history at the New Central Library

The New Central Library’s historian-in-residence Kevin Allen recently released his book Our Past Matters. On December, he’ll be hosting a conversation with Lois Szabo, the owner of Calgary’s first-ever gay bar Club Carousel. This event is free to the public, no advance registration required.

Enjoy six delicious courses of Italian food for just $55 at this event. The price includes both GST and gratuity with wine and cocktail pairings available for an extra charge. Lina’s is serving up crab and cheese bignes (a cousin of the cream puff), pumpkin cream and chickpea soup, fennel and orange salad with smoked salmon, London fog sorbet, pink peppercorn tournedos and panettone flan. It’s about as far away from turkey dinner as you can get.

Nicolas Cage, John Cusack and John Malkovich star in this high-octane ‘90s action flick. Appropriately screening at The Hangar Flight Museum in Northeast Calgary, the plot follows the recently paroled Cameron Poe (Cage) as he becomes trapped on a plane hijacked by desperate criminals. This is part the museum’s monthly movie nights which are supported by donations from attendees.

Get the best of Telus Spark’s naughty side

Telus Spark’s last Adults Only Night of 2018 will feature some of the most popular activities from the year — taking part in some may even net you a lump of coal on the 25th. Who can resist the classic Draw Your Junk workshop, learning to make your own infused liquor or a product demo from Little Shop of Pleasures? You can balance out all that sinning by visiting Canadian Blood Services, learning about Pet Access League Society (PALS) or building a toy to take home for a little one. Maybe science can even answer how Santa has managed to stave off heart failure while living on an all-cookie diet. Tickets are $26.

Indigenous Resilience in Music (IRIM) is a local organization dedicated to amplifying the voices of Indigenous musicians. This celebration at the King Eddy will feature performances from rapper Drezus, punk band Pope Joan and three others. This event will celebrate the announcement of 2019 programming produced by IRIM.

RuPaul is back on TV for another season of Drag Race: All Stars. That means some of your favourites from past seasons are back for another chance to take the crown. Celebrate the premiere episode by heading to Dickens Pub to hang out with the Glamorous Ladies (and Gents) of Calgary, a troupe of drag artists who perform live following the screening. There’s no cover but bear in mind it is customary to tip performers at drag shows.

Renowned documentary photographer George Webber celebrates the launch of his eighth book with a free event at the New Central Library. Alberta Book goes back nearly 40 years into Webber’s portfolio to show an Alberta of days gone by. The book will be available for purchase for $45.

Steer clear of the eggnog and head to Village Brewery for performances by shoegaze bands Heavydive and Paradise. This is part of Village’s Cask Sessions where musicians come to the brewery and collaborate on a customized version of Village beer, available for one night only. This show is free to attend. Read more about live music at Village and other breweries here.

What’s the deal with trivia nights, anyway? Find out the answer at Gruman’s Catering and Delicatessen during this Seinfeld trivia night. While technically this event contains the spirit of “Festivus,” it really is a unique way to side-step the saccharine cheer of the season. Teams of up to four can register for $30 per person via Eventbrite — your ticket price include a beverage and a “nosh.”

Hear professional storytellers talk about their worst dates ever at Koi

Ever have one of those dates you’ll never forget? Not because the sparks were flying, more like because the person at the other end of the table ended up having three heads. The pros behind Story Party Tour have toured over 50 countries and will be presenting stories on everything from cat-fishing, ghosting and, um, unwanted pictures. Have a horror story of your own to share? You can submit online or on the night show in person — all stories are kept anonymous. Limited tickets are available for the 9:30 p.m. for $28, all other showtimes are sold out.

Revel in the obscure talents of others at a fundraiser

Sled Island Music and Arts Festival recently became a registered charity, and you know what that means — fundraisin’ time! Its other fundraisers are basically famous at this point — the one-night-only bands of the Rock Lotto, the debauchery of the Halloween party at the #1 Legion — but this one is a brand new bag. The Sled Island Gong Show will take place at The Palomino on December 15 and features a variety show where participants are encouraged to show off their “bizarre or surprising talents” live on stage. Tickets are $10 in advance.

Canada’s Sports Hall of Fame invites you to a free day of Grey Cup themed activities in celebration of its opening of a new exhibit. You can meet Calgary Stampeders players, watch a screening of the 10th Grey Cup and browse the new 2018 Hall of Famer “Locker Room.”

Get a workout in support of children’s literacy

Room to Read Calgary has joined forces with Barre Body Studio for an event called Barre for Books. Attendees can try a barre class for a minimum $10 donation which will support Room to Read’s literacy and gender equality initiatives.

Drink beer in a parking lot and have your portrait drawn

The Dandy Brewing Company celebrates the end of its first year in Ramsay with a party they’re calling Dandy Fest. For a $5 cover you can enjoy DJs and live music both inside the taproom and out in the parking lot. Flapjacks and beans will be served, and a special beer menu of the brewery’s favourites from around town will be brought in. Perhaps the highlight of the event is portraits by Kelsey Fraser, who created the charming character art on the space’s main feature wall. Note that the parking lot closure will make stashing your vehicle a bit more challenging. Consider a taxi or getting there on two wheels.

See the original Tron at the Globe

The original Tron has the kind of rarefied cult status few films can match. It revolutionized the art of visual storytelling with its mix of computer and backlit animations in 1982 but found only moderate success at the box office. The story follows the rivalry of two video game video developers and takes a turn to the bizarre when one is sucked into the world of malevolent video game. This is part of Quickdraw Animation Society’s Saturday MASS (Monthly Animation Screening Series) and tickets go for $10.

Join accordionist Penny Sanborn, guitarist Jamie Philp and bassist Rubim de Toledo as they release the new album Mirror Suite on Sunday. The concert will consist of French, Italian and tango music from the album, which will also be available for purchase on site. Tickets are $20.

Learn to cook Italian during several workshops with The Spice Chica

You can choose between four different Italian cooking classes with The Spice Chica on December 16. Choose between the fresh pasta from scratch, Neapolitan pizza, decadent desserts or fresh ricotta gnocchi classes taking place throughout the day. Registration is $55 per person.

Release the holiday stress by slinging a few axes at targets at Batl Axe Calgary. Teams of four register for $50 each to compete in this final stop of Axe Cancer national tour. The event is in support of Camp Quality, an organization that pays for kids with cancer to attend camps. Who says the season of giving needs be all mistletoe and ugly sweaters?

Watch (or join) a poetry slam competition at Dickens Pub

The Calgary Poetry Slam invites you to attend or take part in its latest event at Dickens Pub. Participants are asked to bring three poems (which needn’t be memorized) under three minutes each to be eligible to compete. Sign-up begins at 7 p.m. on site and often fills up fast. Hopeful participants are encouraged to arrive early. Admission is $10 or by sliding scale depending on need.

Build your own terrarium at WinSport

Plant Nite at WinSport is a chance to build your own terrarium even without a green thumb. All materials and instruction are included in the $61.50 ticket price, and adult beverages will be available for purchase — ages 18 and up only, please.