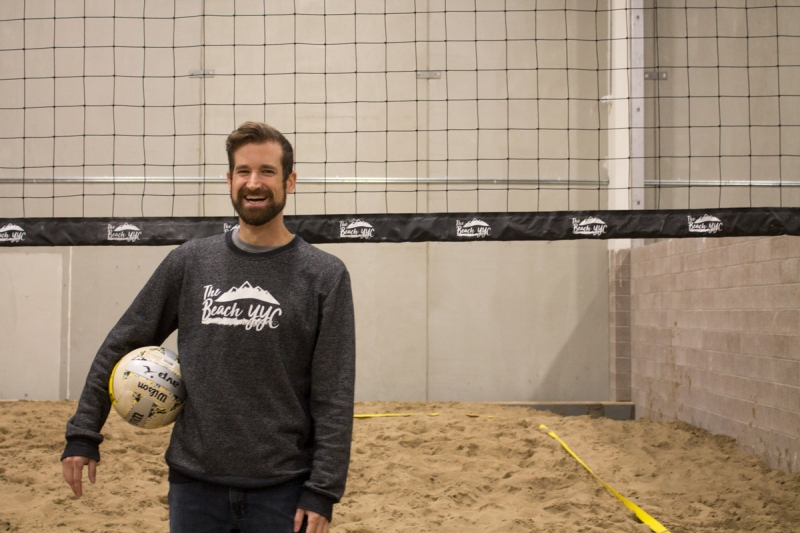 Boutiques and breweries aren’t the only reasons to visit the area around Ramsay and Inglewood now. The Beach YYC is an indoor beach and recreational facility opening this Sunday, September 23 in Portland Plaza located in southeast Calgary. You’ll find it across the street from Crossroads Market and behind Eighty-Eight Brewing Company.

The main attraction at The Beach YYC is the 12,000-square-foot sandy beach area at the back of the warehouse-style building. There are five courts that will be used mostly for volleyball, ultimate Frisbee, dodgeball, beach tennis and soccer.

The open house this Sunday runs from noon to 8 p.m. and there will be sports demos and pick-up games with competitive athletes as well as a kids’ beach party with three-legged races and tug-of-war.

Admission to The Beach YYC will be free from September 23 to 30.

To play at the beach, you can register for a volleyball or ultimate Frisbee league (spots are still open) or do drop-in. You can buy a single drop-in or buy a 20-pass. Drop-in times will be posted weekly on the company’s website and social media but will include late-night (10 p.m. until midnight), early-morning and weekend hours. During these times, you can also play touch football, spikeball or do a beach yoga class. Rentals are also available for birthday parties (for adults and kids) and corporate team-building.

The facility is modeled after other indoor volleyball beaches in Canada, such as 6Pack Indoor Beach in Vancouver and the Beach Volleyball Centre in Winnipeg. The purpose of The Beach YYC, says owner Elliot Weinstein, is to create a space where Calgarians of all ages can hang out, have fun and be active even in the middle of winter. He also hopes to host special events on the beach like live concerts.

“I tried to make it more of a recreation space as opposed to just beach volleyball,” says Weinstein.

Weinstein, who is originally from Vancouver, started putting together his business plan after he was laid off in December 2016 from his previous job as a consultant. He plays in an ultimate Frisbee competition in California every year and says he just wanted a job where he could wear flip-flops every day.

By spring 2019 there will also be a licensed, 50-seat café with snacks and rotating local taps upstairs. You won’t have to pay to play on the beach to access the café, and there will be free wifi as well as a self-serve, toonie “honour bar” with slushies, popsicles and Phil and Sebastian coffee. The café will also feature a “patio” overlooking the beach below and will play host to local musicians and special events.

“I want it to have a community feel, for people that even need a place to work or hang out or study and they just need to get away,” says Weinstein.

Currently you can bring in your own food and re-usable dishes. Plastic water bottles are not sold here, but there are water stations or you can purchase a reusable water bottle from the merch store, which also sells branded sweaters, T-shirts and tank tops.

The Beach YYC was also built with inclusion in mind. There are modern locker rooms (with washrooms and showers) for men and women as well as one that is gender-neutral, complete with a nursing station and change table.