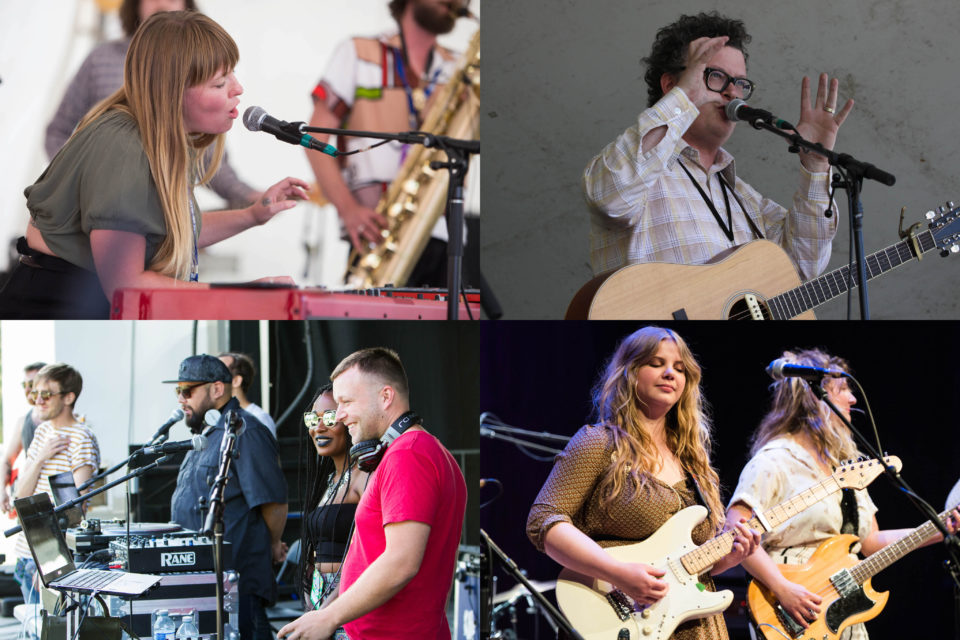 If someone asks you what festival to check out in Calgary, what’s the first thing that comes to mind? For many, it’s the Calgary Folk Music Festival, which has been hosting its blissful, multi-day summer festival for 40 years. Folk Fest, as most call it, is actually a lot more than those four days.

The organization also presents an annual, multi-venue winter festival called Block Heater and offers a year-round concert series, both of which make use of the festival’s very own venue, Festival Hall in Inglewood. The list could go on, but you get the idea: Calgary Folk Music Festival is a cultural institution.

This Friday, September 13, the organization is celebrating four decades of community with a free release party for Cover Art at the aforementioned Festival Hall. Cover Art features newly recorded covers of artists from the festival’s history, all by local artists. Cover Art was recorded in part by noted engineer Graham Lessard at the world class recording studios inside Studio Bell, home of the National Music Centre. It will be available for purchase at the event for $25 for a CD and $48 for a double LP. Tom Phillips and the DTs, Danny Vacon, Ig Bo Lyn, Lorrie Matheson, Samantha Savage Smith and Sargeant & Comrade will all perform.

We spoke to four artists who each recorded a track for Cover Art about their experiences with the festival and their songs of choice.

Though she says the songs she writes with Kirill Telichev for their band Copperhead sound nothing like David Byrne’s music, Liz Stevens cites the chief songwriter for Talking Heads and solo artist as one of her greatest musical influences. She and the rest of Copperhead chose the song “Heaven” based on a fascination with the way its lyrical content (“Heaven is a place where nothing, nothing ever happens”) matched the monotonous song structure. For their take, Stevens says they used the National Music Centre’s facilities to full effect — even beyond the luxurious parts.

“There’s just such a vast amount of equipment in there that you just never get your hands on. Some of the tape machines are $10,000… We went around with maracas and we tried to test the acoustics of some of the rooms we wanted to work with. We ended up recording some percussion in the fourth floor bathroom,” she laughs.

Copperhead last played Folk Fest in 2018. It once placed third in the festival’s annual songwriting contest before taking home the top prize a few years later. The band’s most recent album, Touch, is available on Bandcamp.

Lorrie Matheson: “Gravity of the Situation” by Vic Chesnutt

Organizing 21 covers of Folk Fest alumni is no small feat. In order to keep the project running steady, Folk Fest’s artistic director Kerry Clarke provided Cover Art participants with a list of cover ideas. Recording engineer and musician Lorrie Matheson however, veered off the list to Vic Chesnutt’s “Gravity of the Situation” because he felt this special song deserved more attention from the world.

“In my view, [Chesnutt is] one of these great unheralded, American songwriter that never really got his due. I mean, he’s one of those songwriters that all the other songwriters know about, but people in general don’t,” he says.

Matheson still recalls his first year performing at Folk Festival with reverence. Chesnutt played that year, and Matheson led a workshop with musical heroes Gordon Gano (Violent Femmes), Exene Cervenka (X) and Freakwater. He says friends will still bring up the magic that happened there to this day. That was in 1999 and Matheson last played Folk Fest in 2012. His album from the following year, The Night Is For Sleepers, is available on Bandcamp.

Sargeant & Comrade: “The Revolution will Not be Televised” by Gil Scott-Heron

Yolanda Sargeant and Evgeniy Bykovets may at first glance seem an odd couple, but there’s no denying the globetrotting soul they make together is remarkable. The mix of cosmic grooves and Sargeant’s powerhouse vocal abilities make them an exceptional fit for a wide-eyed reimagining of Gil-Scott Heron’s iconic rallying cry “The Revolution Will Not be Televised.” Though covering a song of this calibre was daunting, the pair felt it was a perfect fit for them.

“They did approach us to do that song specifically because we have this other song that talks about revolution, ‘What I Realized,'” says Bykovets. “We wanted to make it modern day so it was relevant for our time, but still have the same message that Gil Scott-Heron had when he delivered his original version,” Sargeant says.

Sargeant & Comrade last played Folk Fest in 2017, fulfilling one of Sargeant’s childhood dreams. Both she and Bykovets reminisced on how meaningful it was for them to be able to jam with other musicians from across the genre spectrum. Watch the video for Sargeant & Comrade’s collaboration with Moka Only on Facebook.

While Samantha Savage Smith did not have a history with the festival until she first played in 2010, it has since become a tradition for her each summer. She has even become an evangelist of sorts for the festival, enticing her parents to attend for the first time and converting them to fans in the process. That first year, she was especially excited to see Annie Clark, a.k.a. St. Vincent. That they played the same year would be reason enough for Savage Smith to take on “The Party” for Cover Art, but the reason behind the choice has an additional, somewhat embarrassing layer.

“Speaking of Annie Clark, I was fangirling backstage while she was chatting with a bunch of people. I was just staring at her in awe, and then she finally noticed my creepiness from like a yard away and took her sunglasses off and smiled and waved,” she recalls. “I just ran away.”

Savage Smith’s most recent appearance at Folk Fest was this past summer with a lush new ensemble of musicians. Though you can hear some of her music on Bandcamp, your best bet is to keep an eye out for live dates on her Facebook page.