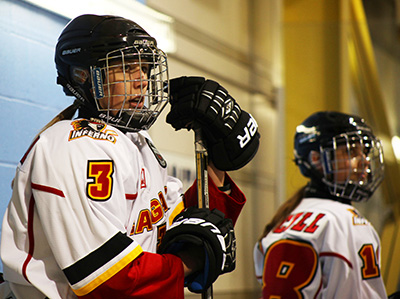 Some of Canada’s top female hockey players are taking to the ice to represent Calgary in the five-team Canadian Women’s Hockey League this season.

With a new name – the Calgary Inferno – a new home base at Canada Olympic Park’s Markin MacPhail Centre ice complex, and partnerships with WinSport and the Calgary Flames, among others, the team is helping high-calibre women’s hockey raise its profile across North America.

“This is the top level of hockey that women can play,” says Inferno general manager Chantal Champagne. “It’s great hockey, skilled hockey. These women are passionate about what they do.”

Team captain Kelsey Webster (above) echoes the sentiment. “Women’s hockey is way more exciting than people expect it to be,” says the six-foot defenceman. “There’s no body-checking, but there sure is body contact.”

A number of national team members – including the Inferno’s Jocelyne Larocque, Meaghan Mikkelson and Tara Watchorn – play in the CWHL, as do the best of the best from the Canadian and American college hockey systems. With just five teams, the league’s annual draft distills the top tier of female players into a competitive, fast-paced, high-intensity circuit.

The Inferno started the season on the road, earning a point in a shootout loss against the Brampton Thunder and losing by a goal to the Toronto Furies when a late third-period comeback fell short. The team entered the “win” column Nov. 24 with a hard-fought 2-1 triumph in Boston. The game was the third of a three-game weekend visiting the league-leading Blades.

Inferno scoring leader Danielle Stone (above) put herself at a goal-a-game pace with a hat trick in the first game of the three, a heartbreaking 6-5 loss (Boston forward Whitney Naslund scored with just 14 seconds remaining to give the Blades the win). Boston also won the second game, this time by a score of 5-2 – one of only two Inferno games so far with more than a one-goal margin.

The Nov. 29 home opener against Toronto, played in the 2,800-seat main arena at the Markin MacPhail Centre, saw the Inferno fall behind early, as the Furies’ Kristy Zamora took advantage of a loose puck to score 20 seconds into the game. Jenna Cunningham replied a few minutes later for Calgary, tying the score, but Toronto’s Shannon Moulson answered back with the only goal of the second period, a power-play marker at 1:56.

The Inferno’s Julie Paetsch scored on a pass from Madison Haller early in the third to deadlock the game 2-2. Despite an action-packed final frame and a frenetic five-minute overtime, the score held up and the game went to a shoutout. Cunningham, shooting second for the Inferno, claimed victory for Calgary when she slipped the puck behind Furies goaltender Sami Jo Small, while Calgary netminder Kathy Desjardins slammed the door shut on Toronto’s snipers for the 3-2 shootout win.

The close results in the season so far show the Inferno can compete with any team, Webster says. “We have to play our game, and our game is going to get us far. We have speed up front and power in the back; we have a lot of skill, and our work ethic is unreal. Every game is up for grabs.”

The Inferno’s next home stand is Jan. 31, Feb. 1 and Feb. 2, all versus the Montreal Stars. Tickets are $10; parking is free, and the Garden Cafe on the main concourse of the 500,000-sq.-ft. complex offers food and beverages including beer.

Follow the team’s season and buy tickets at cwhl.ca; tickets are also available at the door.