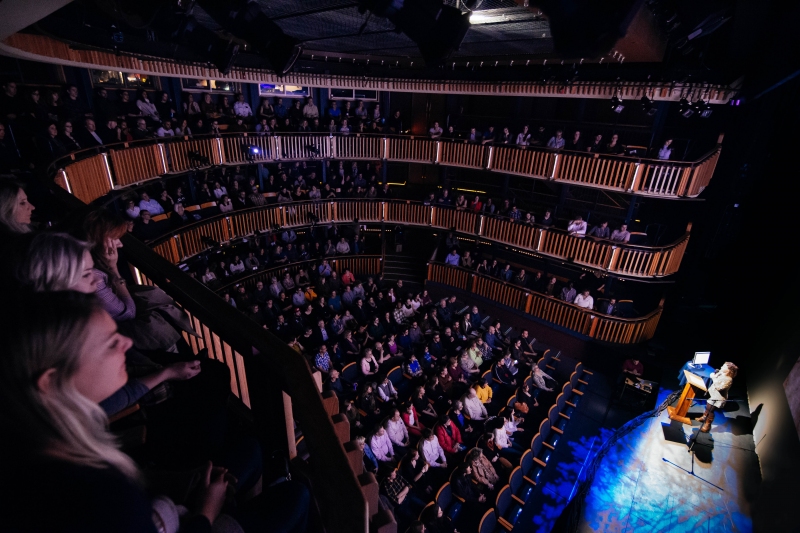 Ah, the dreaded presentation. For anyone who has sat in a warm classroom, lecture hall, or office, when the lights dim, the projector screen begins to emanate a soft glow, and the speaker starts to speak… well, you’re pretty much toast in the struggle to stay alert. Thank god for coffee. As described on the PechaKucha 20×20 website, PechaKucha 20×20 was created in 2003 by two architects, Astrid Klein and Mark Dytham, as a creative solution to the problem that seems to plague anyone who gets drunk on the power of a captive audience. As the website succinctly puts it: “Give a microphone and some images to an architect – or most creative people for that matter – and they’ll go on forever! Give PowerPoint to anyone else and they have the same problem.”

Calgary became a PechaKucha city only six years after its initial inception, in 2009, according to Col Cseke, a PechaKucha Night Committee Member for the Calgary event. Cseke explains how the unique format of the night works: “A PKN night is a collection of speakers giving talks, all sort of their interpretation of whatever that night’s theme is. We usually have about ten speakers. Every speaker provides us with a slideshow of 20 slides that each are up for 20 seconds. It ends up being six minutes and 40 seconds or so per speech. It’s very rigid, the slides auto advance every 20 seconds. It makes for very tight, kind of high-performance speeches.”

For Cseke, the beauty of the event lies in the breadth of ideas that the speakers present on a singular topic, displaying the diversity of creativity, thoughts, and passions in the city. “It’s a really big range of Calgarians that we get to do the talks. They’re not gurus. They’re not necessarily experts on what they’re talking about. They’re usually talking from really fascinating life experience or personal experience,” says Cseke. “We celebrate the everyday nature of the multiple walks of life that folks come from.”

Here are five things you should know about five of the speakers who will be performing at PechaKucha #32.

Ari Agha, PhD, will share the research they conducted on the effects of hormones on voice after discovering there is very little information available about this effect. “What’s relevant to the presentation is I am transgender, in particular I’m genderqueer, and I am also an avid singer. I’ve been singing since I was nine or 10 years old. When I started thinking about whether I wanted to take hormones, I started doing a little bit of research into what the effect of testosterone are on singing voices. It turns out that we know very little about how that goes,” says Agha. “By training I’m a researcher, I have a PhD in Sociology, so I kind of put my researcher hat on and decided I wanted to document how my voice transition went.”

John Do considers whether or not fate plays a role in success.

John Do takes on the theme of fate in relation to success in his presentation. “I’ve had many mentors in my life. Sometimes you don’t know who you meet, but when I look back, I feel as if maybe fate intervened in certain circumstances because I learned some lessons that I really needed to know. I think the phenomenon that I would call it is synchronicity,” says Do.

Rabbi Mark Glickman contemplates the role of fate within our lives.

Rabbi Mark Glickman offers his own thoughts on fate, as well as his knowledge and understanding as a rabbi. “I’m going to be sharing some Jewish perspectives on fate and my perspective on fate as a student of ancient traditions and wisdom of the Jewish people. I’m going to reflect on it personally, as well as a rabbi,” says Rabbi Glickman.

Ari Sarantis contemplates the intersection of two important dates and one place in his life.

In his presentation, Ari Sarantis contemplates the meaning behind his return to a place that holds great significance in his life, using two dates to create the narrative of his story. “The first point in time would be 1984, around May 1, when my biological father died. And at the time, I was on some highway somewhere in the U.S. between Philadelphia and Los Angeles. That’s kind of the starting point for a pretty drastic life change,” says Sarantis. “The other bookend for the discussion would be March 30, 2018, which is when I will be in Santa Monica once again to do a relay race called the Speed Project with Run Calgary. It’s a running relay from Santa Monica to Las Vegas through Death Valley. I really started thinking about all the things that happened between when I first got to LA in 1984, and what’s going to happen when we do this race.”

Melissa Tierney discusses fate in relation to her experience of an intense fall when she was travelling.

Melissa Tierney’s presentation focuses on fate in relation to a significant travel experience. “I’m an outdoor enthusiast, I’ve travelled all over the world doing mostly adventure wilderness travel, and I used to be an international trip leader. The story is going to be about a time that I was trip leading in Colombia, South America and things kind of went unexpectedly,” says Tierney. “[It’s] about a miraculous survival story of falling 14 meters with barely a scratch on me. When I got back, a lot of people asked ‘what did this change about your thoughts on fate.'”

[Correction: This article has been updated to remove destiny and god from Melissa Tierney’s final quote.]