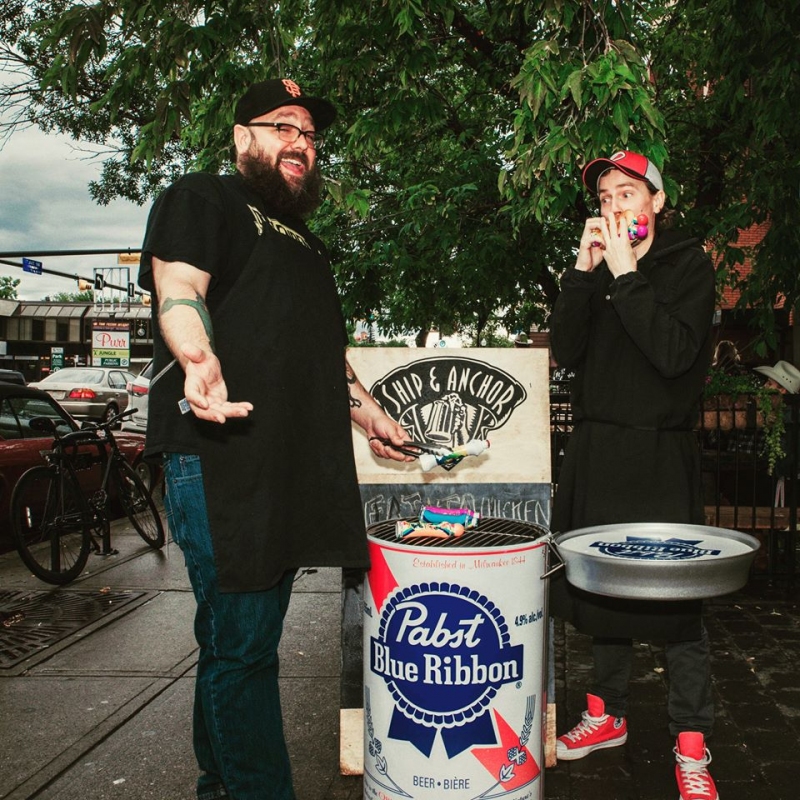 On Tuesday evenings, you can find Beau Barker and Darren Ollinger on 17th Avenue doling out madcap fun at the Ship and Anchor’s Punk Rock Bingo. Barker and Ollinger are the hosts of the long-running evening. When speaking with Ollinger, he peppers his answers to questions with bits of hilarity which reveal the variety of going’s-on that occur during the event, such as “hula-hooping,” “reading erotica out loud to the crowd,” and the potential of “winning a coffee-maker or a lava lamp.” Ollinger sums up the whole affair rather succinctly: “Actually just playing bingo itself is kind of boring, so we splash a lot of nonsense and entertainment into it so it becomes a very rowdy presentation of debauchery. The playing of bingo is just a part of it, you know what I mean?”

Here are five things you should know about Punk Rock Bingo.

The two hosts, Barker and Ollinger, have different roles to play during Punk Rock Bingo.

Barker and Ollinger sounds like a great pairing for a future buddy cop movie, which would work well with their respective roles when it comes to hosting duties. “I’m the bad cop to his good cop. Beau calls the numbers and entertains the crowd a little bit, and I’m the purveyor of the bingo sheets. I intro the rounds and I do all the punishments and a lot of the mini-games in between the bingo,” says Ollinger.

Short games played in between bingo set the evening apart and will potentially have you brushing up your flattery skills.

At Punk Rock Bingo, don’t expect to sit in a staid fashion listening for your bingo numbers. In between each bingo game, participants play “mini-games.” This adds another touch of the unexpected to the mix. “We do things like air guitar competitions. We started doing compliment-offs. It’s pretty funny stuff. We bring people from the crowd and they have to stand at the microphone and compliment their opponent. Whoever has the best compliment wins the round,” says Ollinger.

Don’t get too hasty yelling out that you won. “Bad cop” Ollinger will ensure there are consequences if you mess up.

“Punishments” are another unique aspect to Punk Rock Bingo. You may find yourself making a new love connection if you end up on the receiving end of one or you might just end up with a rather peppery sneeze. “Punishments [are] if you mess up at bingo. Like if we’re playing for a small square and you don’t have it but you call bingo, you get punished. Or if you have a wrong number. Some people just think it’s funny to yell bingo for no reason at all. We bring them up and they have to spin the wheel of punishment and there are a bunch of hilarious gags underneath these envelopes. Whatever it lands on, they’ll have to do silly things like they’ll have to snort pepper, or slow dance with a stranger, or we call their parents, or eat a mystery thing that’s in my pocket sometimes,” says Ollinger.

Prizes are a combination of donations from sponsors and treasures from Ollinger’s adventures about town.

The prizes are varied and range from the ridiculous, to the useful, to the just plain fun. “A lot of [the prizes are] just me, mulling about town and finding weird things at thrift stores and Walmart and places like that. A lot of the stuff is donated by sponsors,” says Ollinger. “[Prizes can include] everything from tattoo gift certificates to crock pots to mini drones to dumb things like DVD players, macaroni and cheese, toques and gloves. We gave away a Pabst Blue Ribbon mini-fridge.”