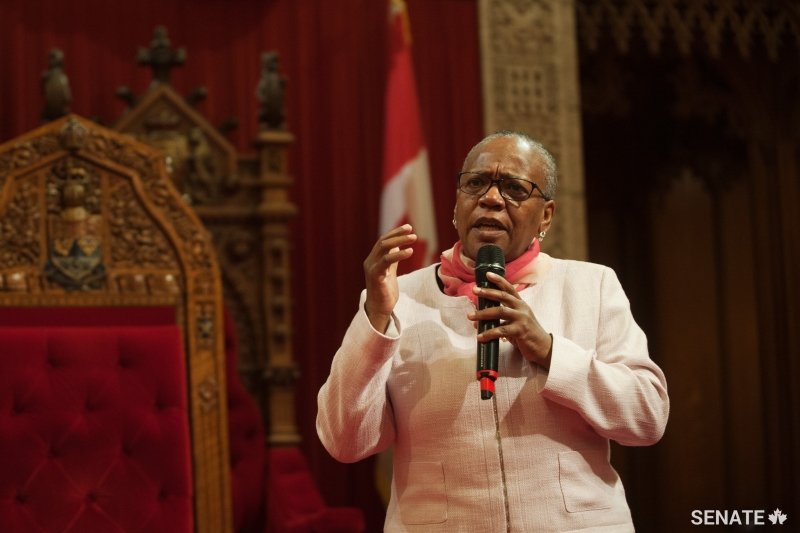 Photograph courtesy of the Senate of Canada.

When reading about politics, it can be easy to get lost in the mire of mudslinging, ignorance, and depressing headlines. However, it is important to remember that hope is not lost – there are still people fighting the good fight in Canadian politics. These people work tirelessly to create forces for change in Canadian society. One such person is coming to Calgary on March 19. The Honourable Wanda Thomas Bernard is the featured speaker for the final event in the Faculty of Social Work’s Positive Disruption Series at the University of Calgary. A champion of social justice, Senator Bernard was appointed to the Senate in 2016. She sits as an Independent, serving as a representative of Nova Scotia.

Bernard was a force for change long before her time in the Senate. Some of the titles she holds, as listed on her Senate biography, include: “social worker, educator, researcher, [and] community activist.” Bernard identifies what she envisions as the meaning of “positive disruption.”

“When I think about positive disruption, I see it as disrupting the status quo using very positive and able-ing strategies, strategies that help you move forward in a positive way,” says Bernard.

Bernard is bringing truths and points of view to institutions that sorely need it. While she acknowledges the frustrations of the pace of change in Canada, she is ultimately hopeful. “I believe that, unfortunately, change is very slow. I’m seeing changes now in Nova Scotia and in other parts of the country that I was envisioning thirty years ago,” says Bernard. “It’s hard to be patient for that long, but I feel very fortunate to have lived long enough to be able to see some change come from some of the things that we were arguing for, pushing for, disrupting for many years ago.

“One of the things I find incredibly exciting is the fact that we have, I think it’s seven, members of parliament who are of African descent. And they formed a federal Black Caucus. This is the first time in history that we’ve had enough MPs to form a caucus. That’s very exciting. And they’re doing positive disruption every day. Their presence brings positive disruption. The potential is enormous.”

Here are five things you should know about Senator Wanda Thomas Bernard.

Senator Bernard is a history-maker by being the first African Nova Scotian woman to hold the position of Senator.

For the first time in history, an African Nova Scotian woman is a representative in the Canadian Senate. However, that’s not the only first that Bernard holds. She is the first African Nova Scotian to hold a tenure track position at Dalhousie University and to be promoted to full professor. When asked what serving as a senator means to her, Bernard says that serving as a senator means to serve all Canadians. “I try to bring a social justice lens to all of our work. I try to think about the voices across this country that are not heard or that are afterthoughts. I try to think about how can we make those more of a forethought as opposed to an afterthought. As a senator, I feel very privileged and honoured to be able to do that every single day. Every day I get to stand up for justice,” she says.

Senator Bernard is the third African Nova Scotian person to serve in the Senate.

In 1979, Senator Bernard, alongside three other women, founded the Association of Black Social Workers in Nova Scotia.

Bernard knew the power of people coming together in the name of social justice when she helped to found the Association for Black Social Workers in Nova Scotia. “The main reason why the four of us came together to form that association was because we were very disturbed by what we were seeing in Nova Scotia in terms of the lack of culturally responsive, culturally specific, and culturally relevant services to children and families,” says Bernard. “The four of us that formed that organization knew that individually we had no voice, but by coming together we had a voice and we pushed for changes and we’ve seen changes. Not to say that everything is perfect or everything is fine. It absolutely is not. But, that organization is still working really hard to bring about change.”

Bernard has won numerous awards in recognition of her impact on Canadian society. The Senator credits any recognition she’s received to the community she’s worked in and with over the course of her work. “I’ve not worked as an individual. I’ve done work as part of a collective, always engaging and working with other people,” says Bernard. “So maybe I’ve held some leadership roles in organizations, but the focus around all of those achievements is not about the elevation of me as an individual, it really is about the social justice work.”

In 2017, she even had an award named in her honour. Every year, the Viola Desmond Awards at Ryerson University are names to recognize women of distinction in Black history in Canada. The Senator Wanda Thomas Bernard Faculty Award goes to a faculty member who is a leader in her community, making a positive difference in equity, diversity and human rights.

Senator Bernard hopes to continue to impact Canadian society through her work in the Senate.

“One of my primary goals as a senator is to have, not just formal recognition, but to bring about greater awareness about the history of Black people in this country, the legacy of slavery, the impact of that legacy on us even today, and mobilizing for change. We’re already seeing some of that beginning to happen. That’s one. The other major thing that I might see is that social justice lens being viewed by all of us as an important lens through which to do our work,” says Bernard.

The Honourable Senator Wanda Thomas Bernard’s lecture, as a part of the Positive Disruption Series, takes place on March 19 at 7 p.m. in the John Dutton Theatre at the Central location of the Calgary Public Library. For more information, visit eventbrite.ca or fsw.ucalgary.ca.