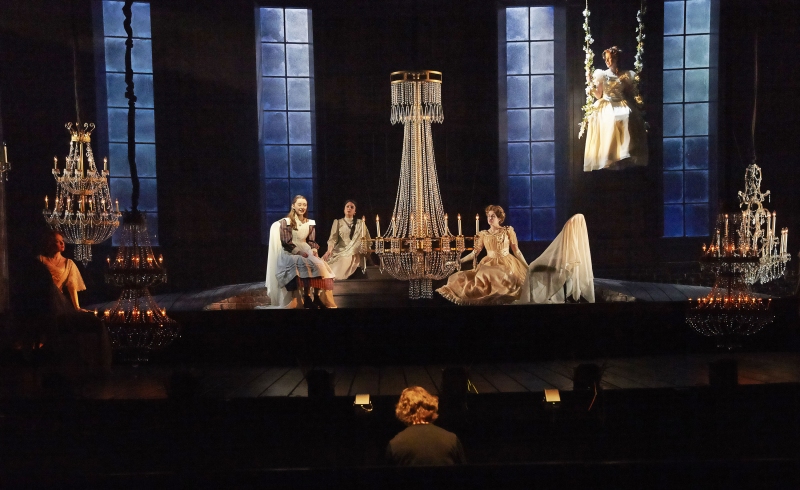 A childhood classic is coming to life at Theatre Calgary. The Secret Garden is a musical based on Frances Hodgson Burnett’s tale of love and growth in an English mansion. The set and costume designer for the production, Cory Sincennes, used his 15 years of design experience (including six seasons with Theatre Calgary) to help create a new imagining of the show. When designing a set, Sincennes makes the story his top consideration. “It’s wonderful to make things look beautiful and have big beautiful pictures and wonderful elaborate scenery, but at the end of the day, you have to tell the story that is in the script,” says Sincennes. “It’s not just scenery, it’s a real life breathing environment that informs the people in the show.”

Sincennes reveals that the set breaks away from traditional productions, and hints at what’s in store for audiences. “It’s not tons of gates with vines and all of those things that you might expect,” says Sincennes. “It’s one of those things where I don’t want to give too much away.”

Here are five things you should know about the set design of Theatre Calgary’s The Secret Garden.

Sincennes refers to the set as “the magic box.”

Theatre Calgary’s production strays away from the formula of musical theatre set design by relying on a single elaborate set. “Stafford Arima, who’s the new artistic director of Theatre Calgary [and is] directing the show, has a wonderful unique vision of Secret Garden. Many, many times [when] it’s done around the world, it is very traditional musical theatre in a sense where every time you go to a new location, the scenery moves,” says Sincennes. “[Theatre Calgary’s is] a more abstracted design. We take place mostly in one set, which is called a unit set. I’ve been calling it the magic box. It represents the manor of which Mary [Lennox] comes to in England.”

Five weeks, over 200 sheets of different plywoods, 2,000 linear feet of pine and spruce boards, and a whole lot of aluminum.

Sincennes estimates construction time for the set at four or five weeks. This included the use of over 200 sheets of different plywoods, 2,000 linear feet of pine and spruce boards, and aluminum. “Just to give a sense of how long it takes to get a show of this size up, that’s like full 40 hour weeks [of construction], with five or six people, and it’s fast,” says Sincennes. “They did it magician fast.”

Sincennes considers the most beautiful aspect of the set to be its shape. It contrasts with a number of other musicals he’s worked on where the choreography has made a flat stage necessary. In The Secret Garden, Sincennes was able to create a multi-level set. “The idea of that was based on the layout of a traditional English Victorian garden. We have like a maze that the actors can climb around,” says Sincennes. “It allows for such interesting storytelling and levels. People can appear out of staircases and disappear. Without having all the scenery of a giant mansion on stage, you’re able to get the idea of hundreds of dark hallways and doorways.”

The atmosphere of a haunted house helped inspire the set design.

Sincennes used the mindset of the characters and the atmosphere at the beginning of the story as his inspiration for the design. “In the show, there’s lots of loss and death that exists in this house before [Mary Lennox] arrives, there’s sadness in that space. I thought about the set as a haunted house. Not in a scary, jump out kind of way, but the eeriness and the shadows. That was my initial jumping off point and then I began looking at lots of architecture of the period and using that to inform the shape of all the different scenery pieces,” says Sincennes. “The space that the audience will see is a dark environment. The show gets lighter and brighter and happier as it goes along, as [Mary Lennox] brings the joy back.”

Sincennes incorporates even the tiniest items to help make the set come alive.

The set design includes things right down to what a character may have left lying around in haste. “There’s a greenhouse set piece and on the shelf, there’s a little Dennis the Menace kind of slingshot that’s hidden amongst the flowers that I put there. My thought behind that is maybe Dickon, who’s one of the young boy characters, snuck into the greenhouse at one point and left it there. I try to have storytelling like that hidden and some of it’s for the actors, so the world is a real space. There’s lots of fun details like that,” says Sincennes.

The Secret Garden runs from April 17 to May 19. For more information, please visit theatrecalgary.com.