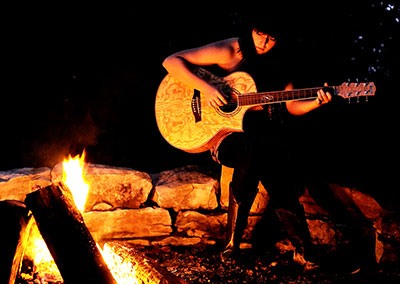 Abbie Thurgood is happy. You might think someone who’s been working at getting her pop-friendly country-rock music heard since she was 14 might be a bit jaded by the time she reached adulthood. But not Thurgood. At 19, she’s just starting to hit her stride.

“I am feeling great,” she says. “I’m confident with my music – not because I think ‘I’m amazing’; I’m not, and I know I have a lot to learn – but I’m confident in the reaction I get from people I don’t even know, from the faces, the tears and the smiles. I’m confident in the number of new friends I’ve made through music, and the way I have evolved as a person because of this beautiful art.”

Born in the U.K. and raised in Okotoks, Thurgood says she now considers Nashville her ultimate destination, having recorded and spent time there over the past few years. “I know Nashville will be my future home. I couldn’t tell you when, but that’s a place that has connected to my heart.”

Her most recent stay in the Tennessee music mecca was earlier this year, when she recorded her upcoming album, “Flameless Fire,” with Grammy-nominated producer Kent Wells. Currently in post-production, the album will be cued up for release “very soon,” says Thurgood, who wrote or co-wrote all 12 of its tracks. “I’m extremely excited about it.”

Thurgood and her band, the Hired Guns, will play several songs from “Flameless Fire” during Blank-Fest at the Blind Beggar Pub on Saturday night. The event is a benefit for the Mustard Seed; admission is a donation of a blanket, warm clothing or cash, with all proceeds going to the charity.

It’s a cause that’s dear to Thurgood. “I used to help in programs like the Mustard Seed and Feed the Hungry when I was in school, and I got to meet people who had gone through hardships and addictions and had their lives taken from underneath their feet. I’m proud to be a part of an organization that will help, in any way possible.”

Also playing at Blank-Fest will be Same Monkey, The Wellington Folk, Mike Ferraro of Candelora, King Dylan, Matt Blais, Atacama Republic, the Heartwicks and Leave the Living. Doors open at 6:30 p.m. with music slated to start at 7:00.

Listen to seven of Abbie Thurgood’s songs on MySpace.