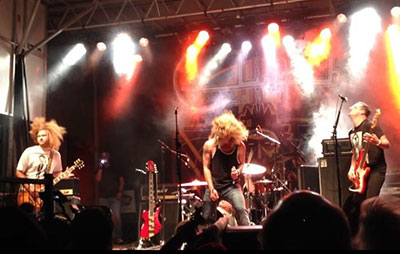 Big, powerful, hard-rocking music with melody and meaning is never out of style. It’s a legacy that comes down from The Who, Led Zeppelin and Black Sabbath through Soundgarden, Pearl Jam and Alice in Chains; heavy music played by technically skilled musicians.

Calgary hard rock quartet Alkatine draws on that history to create sounds that any fan of the above bands will recognize instantly. But it’s not a calculated thing, says Alkatine drummer Dougie Pocasangre.

“We’re honest, and even dark at times – a ‘what you see is what you get’-type band. We’re not trying to preach or send a specific message out; we’re just playing and writing what we know.”

Along with Pocasangre, Alkatine includes guitarist Kurtis Lovas, bassist Drew Stefanik and vocalist Brady Riplinger – whose voice is at times more than a little reminiscent of Soundgarden’s Chris Cornell.

The night of original music at Studio 82 – billed as a “Kiss concert after-party,” since the face-painted rock icons are playing the Scotiabank Saddledome earlier in the evening – also includes local bands Atacama Republic and Zoo Lion.