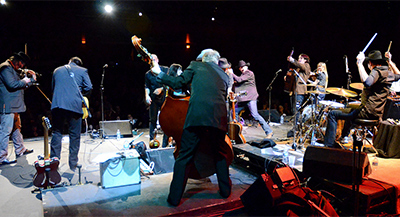 Barney Bentall‘s career has had its share of plot twists. From a youthful start in the music business in the late 1970s, he journeyed to mainstream success the following decade with his band, the Legendary Hearts. He took an an extended hiatus from music in the early 2000s, and today he’s enjoying a musical renaissance at the helm of the Grand Cariboo Opry, among other projects.

“I’ve been out there a long time doing it, and it’s still fun,” Bentall says. “I keep trying to follow my nose and do what seems right.”

Judging by his list of platinum-selling records – most notably the 1988 hit single and ongoing classic-rock staple “Something to Live For” – and honours including a Juno award and a Genie nomination, he’s gotten it right more often than not.

Born in Toronto, raised in Calgary and based on the west coast, Bentall today is using his talent, experience and connections to raise funds for charities while giving audiences a Grand Ole Opry-style good time. In the tradition of the original Nashville Opry, each song gets a folksy, down-home introduction; the difference with Bentall’s project is that the tongue-in-cheek intros are sponsored by businesses, with the proceeds going to local causes.

“The gate receipts keep the band on the road, and the sponsorships support the charities,” he says. Saturday’s show will benefit the Bragg Creek Community Association and businesses affected by the June 2013 flood.

Also taking the stage for the evening of country-and-western musical fun will be Neil Osborne of 54-40, Bentall’s son Dustin Bentall – a country music star in his own right – Kendel Carson, Ridley Bent, Matt Masters, Wendy Bird, Angela Harris, Leeroy Stagger and the Gold Rush All Stars.

“It’s just a really great collection of artists playing some standards and some of their own songs,” Bentall says. “It’s all about the music. For all of us, it’s the most fun thing we do each year.”

With such an illustrious lineup of talent, there’s plenty of original music to draw from – and every song is given the Grand Cariboo Opry’s unique treatment.

“Without giving too much away, the encore tends to be slightly countrified versions of hits,” Bentall says, citing a version of the 54-40 smash “Ocean Pearl” with the familar guitar riff played on banjo and fiddle.

“How often do you get to see a variety show on that scale?”