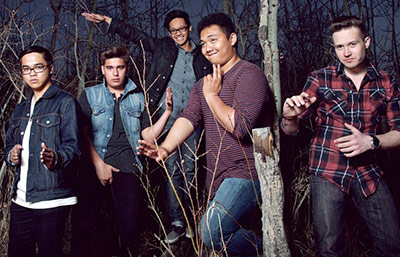 When Calgary alt-rock quintet Heigh River takes the stage, audiences can count on one thing: non-stop high energy from the first note to the last, says guitarist and lead singer Forrest Eaglespeaker.

“We don’t let up,” he says. “We don’t care if it’s a big crowd or just a few people, we always put on our best show, beginning to end.”

Heigh River’s music can be heard on its SoundCloud page. Each song shows the band members’ influences, which Eaglespeaker says range from Kings of Leon and Death Cab for Cutie to the Arkells and John Mayer. The sound is energetic, yet thoughtful and well-crafted; mature and melodic but with youthful intensity.

Keyboardist Jerrick Dela Rosa adds a degree of polish to the sound that takes it beyond what the typical guitars-bass-drums lineup can deliver. Meanwhile, lead guitarist Josh Ramos weaves a tasteful tapestry of single-note lines and arpeggiated chords through the songs, while drummer Kyle Donauer and bassist Gerry Datahan lay down a rock-solid foundation, stepping up with fills that add another dimension of professionalism to the music.

The name Heigh River – it’s pronounced “hey” – was inspired when Eaglespeaker was driving a truckload of drywall south from Calgary.

“I’d seen it before, but that day when I saw the sign for High River it stayed with me,” Eaglespeaker says. His girlfriend suggested changing the spelling, and the name stuck.

The band is currently working on a small collection of new songs, and the resulting EP will be Heigh River’s first physical release, Eaglespeaker says, adding that the band’s goal is more about being heard than making money from sales.

“It’s an idealogy that music is to be shared, not to be profited from. We’re all passionate about what we’re doing – how do you put a price on that?”

What to Do in the Mountains in October