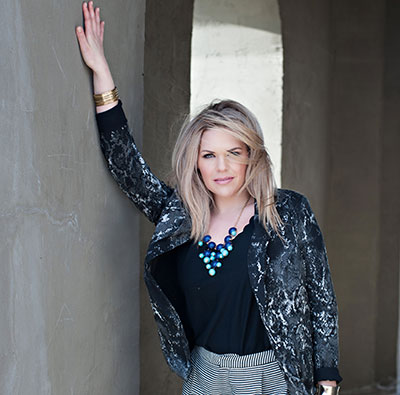 When Lyndsey Hoff was a little girl growing up near the tiny Alberta badlands hamlet of Dorothy, she would burst into song whenever the mood struck.

“I was a quirky kid. I would sing outside to the birds and the plants,” she says. “I think it definitely helped me be myself. It was just a wonderful childhood.”

Singing in front of an accepting audience of wild flora and fauna was just the start; Hoff took the stage in front of people for the first time at the age of nine, and hasn’t stopped since. But although music has remained a constant, at age 28 her attitude toward it has come full circle.

“I think for a long time I chased the idea of being a star more than the music,” she says. “I can be very impatient; it’s one of my worst flaws. But I just took a step back and stopped freaking out, stopped chasing something. It’s great to be successful, but who decides what success is?”

After a period of soul-searching, Hoff realized that, in the end, it’s the music that matters most. “When you come back to the music you realize why you do it: being in the music, telling my story and telling people who I am through my music. I just want to bless people with it.

“For me, music is so healing, and just so powerful.”

Hoff’s show Sunday at the Ironwood will kick off the next phase of her career, launching her five-song “I’m Worth It” EP. The collection was recorded in Nashville with creative support from Denny Hemingson (best known for his guitar and pedal steel work with country superstar Tim McGraw), Emmy-winning songwriter and guitarist Blue Miller and A-list engineer James Waddell.

“It’s really amazing to fuse with these producers and musicians. I just had the best players ever on these songs,” Hoff says. All the songs were written on acoustic guitar, and it shows in the honest feel of the music. “When I try to tell someone my genre, I say ‘soul country.’ It’s definitely not twangy country.”

Hoff’s early years with her feet on the Alberta soil continue to come through in the honesty of her music.

“All the things I write about have really happened to me. People, at the end of the day, just want real. They want genuine and authentic.