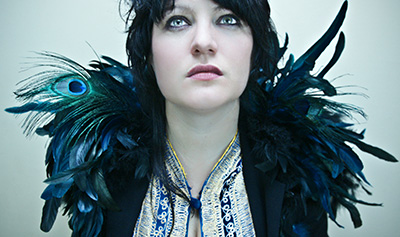 “What I want, and what I got; well it ain’t enough, no it’s never never ever enough,” sings Kenna Burima on “Inside Out,” the fourth track on The Pygmies’ new album, Inside Your Mind. The song is keyboardist Burima’s only turn at lead vocals on the album, and – like the rest of the set – it’s an authentic garage rock tour de force.

Those lyrics might resonate with anyone who’s familiar with Burima’s career. A classically trained pianist, her musical projects have included orchestral pop collective Woodpigeon and bands Beaver Squadron, the Brenda Vaqueros, the Pigeonettes and the Five Step Program, among others, along with an ongoing solo career (expect an album in March).

As if that weren’t enough – which it never is, apparently – Burima is also a music teacher, blogger and broadcaster. And she runs a pet-sitting business. But her focus at the moment is The Pygmies, a quartet that began as a duo of guitarist Jim Blood and drummer Brendan Tincher.

“They asked me to come join and add keys, and it was like everything they communicated and everything I tried was the right thing,” Burima says. “We just got along so well.” The addition of bassist Ryan Lottermoser rounded out the band, and set up the Inside Your Mind album.

The music is inspired by the original garage rock of the 1960s, bypassing the minimalist neo-garage of the Black Keys, White Stripes and their ilk to draw from the earlier well of the Nuggets compilations of 1960s singles. Think surf-soaked psychedelia: the Electric Prunes, the Standells, Question Mark and the Mysterians, the Seeds. Trebly guitars on the edge of distortion crank out choppy riffs overlaid with swirling organ and emotionally wrought vocals.

The Pygmies pull off a neat trick, overtly paying homage to those sounds and that particular attitude while avoiding a self-consciously retro or low-fi vibe.

“I think our sound is something that happens organically,” Burima says. “We’re pretty particular about the instruments we use, and the effects pedals. But there’s no pretense; we really do go for the sound. And when it comes to the songwriting it’s really about the hooks, keeping it simple.”

For Burima (above), the part about keeping it simple has meant having to overcome some of her classical training. “It’s taken a number of years to capture the raw, unhinged sound. You’re programmed to play a certain way, and to be able to undo that is a challenge. It’s awesome that I get to do this.”

The fact that Blood and Tincher are the band’s main songwriters is also freeing, she says. “That means I can place myself in the song with no ego, and do what I do that fits. I really appreciate the no-drama approach to things. It’s really fun.”

Opening Friday’s show at Broken City will be rockers Hag Face and veteran Calgary band the Von Zippers. The night will include a lineup of guest singers including Chris Nevile, Lorrie Matheson, Don Davidson, Cam Hayden, Miesha Louie and Nicola Lefevre, who will join The Pygmies in performing some classic tunes from the original garage era.