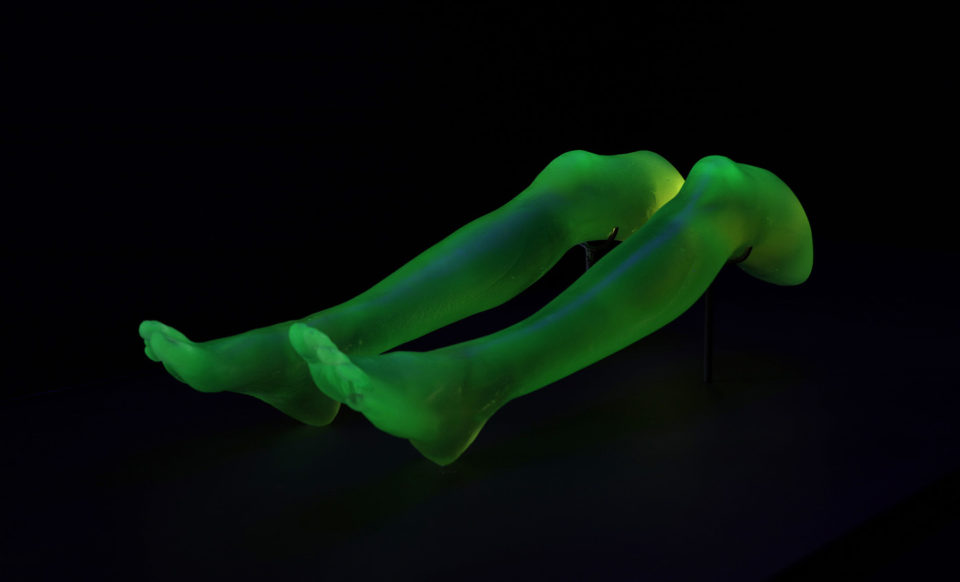 Rosa the Beautiful by Mary Kavanagh.

Lethbridge artist Mary Kavanagh has been researching nuclear technologies and the atomic age for approximately 10 years, producing a sizable collection of varied works along the way. Her exhibit, Daughters of Uranium, includes a number of these works, alongside artifacts collected at nuclear sites, historical documents and loaned art. Daughters, according to its accompanying text, “explores the legacy of the atomic age from the perspective of the sentient body and intergenerational trauma,” and stems from Kavanagh’s “longstanding interest in the body as a site of memory, erasure, violence, and inscription.”

Daughters of Uranium is currently being shown at the Founders’ Gallery at The Military Museums, where it will be up until Jan. 18, 2020. Though this show is something you certainly have to see for yourself, here’s a brief overview of three of the works on display.

This piece is made of uranium glass, which contains uranium oxide and glows under black light. Uranium glass became popular in the mid-19th Century and remained so into the early 20th Century, but fell out of fashion once uranium was weaponized. The level of radiation in the glass is negligible and won’t cause radiation poisoning. This particular piece was two years in the making: Kavanagh worked with a Winnipeg-based glass fabricator to obtain the semi-scarce glass material and find the right model for the glass-casting process. She then created a variety of uranium-glass objects before ultimately creating the compelling Rosa the Beautiful.

While doing research at the Canadian War Museum, Kavanagh encountered a design for a suit intended to be worn by pigs, which were used as a proxy for humans in chemical, biological and nuclear testing. Daughters of Uranium features a replica suit that Kavanagh had made based on designs provided to her by the Canadian War Museum. There’s something deeply unsettling about the concept of a pig being dressed up in a costume and subjected to a nuclear blast in the name of science.

In 2005, Kavanagh went to the White Sands Missile Range in New Mexico where the Trinity nuclear test took place on July 16, 1945. In 2012, she began a research project that involved annual visits back to the Trinity test site (which is open to the public only two days per year) to conduct interviews with visitors on their motivations for visiting and other subjects. Kavanagh has since accumulated approximately 200 interviews with everyone from scientists to “atomic tourists.” In Trinity, two channels of video play a mixture of her interview footage and archival reels of the blast and its preparation.