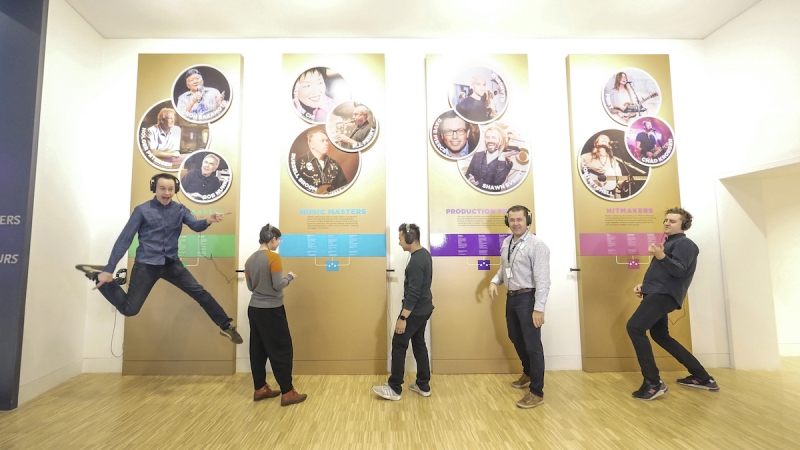 Alberta's creative and industry professionals get their moment in the sun inside Studio Bell. Photograph by Brandon Wallis.

Most Albertans with an inclination for music already know that artists like Nickelback, Feist and Tegan and Sara hail from the province. The new exhibition by the National Music Centre is called Trailblazers: Alberta, and celebrates those stars as well as lifts the veil on the crucial background roles that the public rarely sees, and introduces a fresh crop of Albertan stars in the making. The exhibit launches on October 26, 2018 and features oral histories, video footage of both interviews and concerts, plus text and photo wall installations. Before you check out this temporary exhibition, read a few surprising facts to steer you towards some of the most fascinating parts of the show.

From Bragg Creek to Alabama to Hollywood, small-town-Alberta raised Shawn Everett quickly became Alberta’s worst-kept musical secret following a series of major accolades for his work on the album Sound & Color by Alabama Shakes. He received two Grammys and one JUNO Award in 2016 for the achievement and has gone on to work with John Legend, The Killers and Kesha.

Before The Weeknd was a global household name he met a young man named Carlo Montagnese from Calgary. Montagnese was largely in obscurity for his work under the pseudonym Illangelo at the time. He had no way of knowing that in one short year he’d be a fixture at The Weeknd’s side and would have credits on tracks by Drake, Lady Gaga and Florence + The Machine. He has continued his influential production work since and in 2013 released an album of his own entitled History of Man.

Learn about these two and others in the “Production Pros” portion of Trailblazers.

Listing Russell Broom’s credits is outright exhausting. The producer, engineer, mixer, musician, songwriter, composer,  arranger, programmer and performer has worked for television and film and alongside myriad other musicians like Jann Arden and George Canyon. Notable credits include performing with Sting and Eric Clapton, a JUNO win for work with Arden and the production of Alberta Ballet’s Love Lies Bleeding score (based on music by Sir Elton John). There’s a lot more to know about Broom — you’ll just have to check out the “Musical Masters” section of the exhibit for yourself.

You won’t want to wait to learn more about Bob Hunka when you visit Studio Bell. This publisher, manager and all-around music executive has taken a seat at some of the most influential tables in the business. In addition to being the Los Angeles representative for the Society of Composers, Authors and Music Publishers of Canada (SOCAN) for eight years, Hunka has managed publishing for mega-stars like Dolly Parton and Emmylou Harris and oversaw the production of soundtracks for shows like Dawson’s Creek and Days of Our Lives during his time at Sony and Columbia Tristar. It’s not hard to figure out why he’s featured in the “Industry Leaders” section of the exhibit.

Did you know that Joni Mitchell attended ACAD before dropping out and pursuing music full-time? Or that Shania Twain’s first-ever Canadian show was booked by an Albertan? We can’t spoil everything you’ll learn at Trailblazers: Alberta, but trust us when we say you’ll be inundated with unexpected trivia about Albertan music past and present.