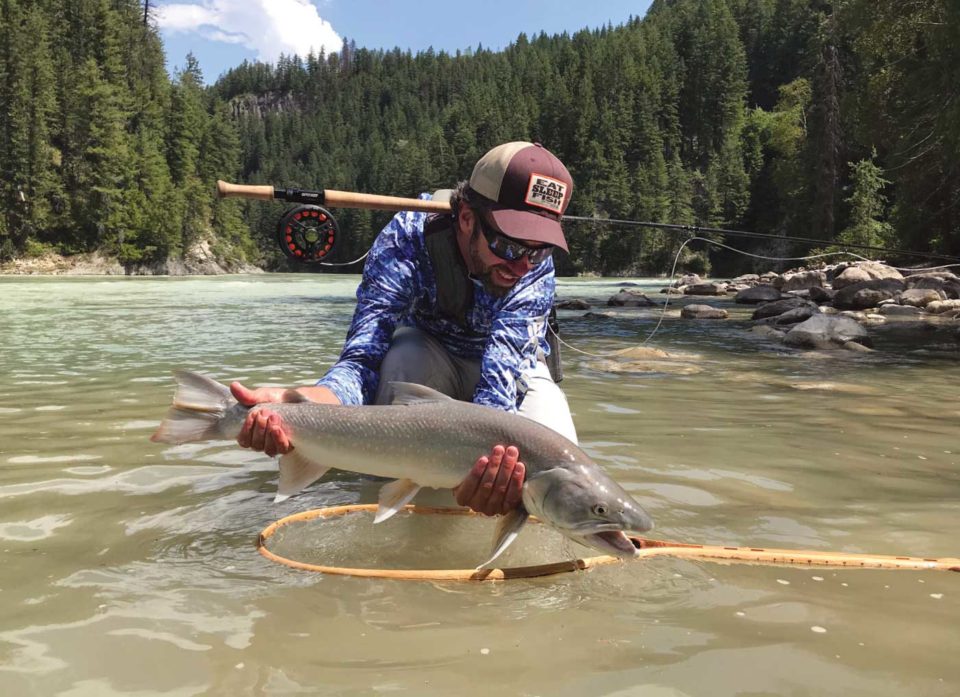 Standing in a dusty logging-road pullout waving around a piece of string attached to a children’s fishing rod, it’s hard not to feel silly. But embarrassment quickly fades, replaced by a mix of focus and frustration in the eternal struggle to draw the string back and forth in the desired long arcs with nothing but subtle arm movements.

Casting gets easier after a few instructive tips from fly-fishing guide Dave Burns, whose next step is to take me out, now armed with a proper fly rod, on forest-lined Blackwater Lake — one of the many lakes Burns fishes — in his small boat. Though the hook does wind up stuck on my hat once or twice, it doesn’t take away from the satisfaction of steady improvement, especially when, aiming for some submerged logs close to shore, I hook my first ever fish and reel it in. Burns deftly unhooks the small rainbow trout and sends the fish on its way, on to the next cast.

Bull, rainbow and cutthroat trout (among other species) thrive in the Columbia Valley’s alpine lakes, crystal clear creeks and in the Columbia River itself. The scenic nature and sheer variety of fishing holes in and around Golden B.C. is one reason the region is gaining renown as an angling destination. Burns, or the Golden Gillie as he’s known around town, launched Golden’s first commercial fishing guide operation in 2016. He’s been fishing in the area for nearly two decades and has the kind of local knowledge that comes only from experience — knowing where to go and at what time of day depending on the season is crucial to getting bites. Like most fishermen, Burns is also a great storyteller. (“Some people think that I get paid to fish, but I really get paid to talk,” he says.) Once he gets going you’re guaranteed to learn something about Golden, the region’s lakes and rivers or the characters (and fish) he has encountered over the years.

Throughout the afternoon you’ll begin to understand why Burns almost exclusively fly-fishes, as opposed to using the more common spin rod. The deep focus and precise, repetitive movements that fly-fishing demands make it easy to find some Zen. Being on the water surrounded by mountains helps, too.

As the session runs its course and Burns turns the boat back toward the lakeshore, lifting the fly out of the water, bringing it back and forth overhead to let out more line, and casting a decent distance in the right direction remains a challenge. It would seem that a few hours aren’t enough to master a skill people spend years perfecting (darn). It’s hard learning to fly-fish in a day. Learning to enjoy it, on the other hand, is wonderfully easy.
goldengillie.com