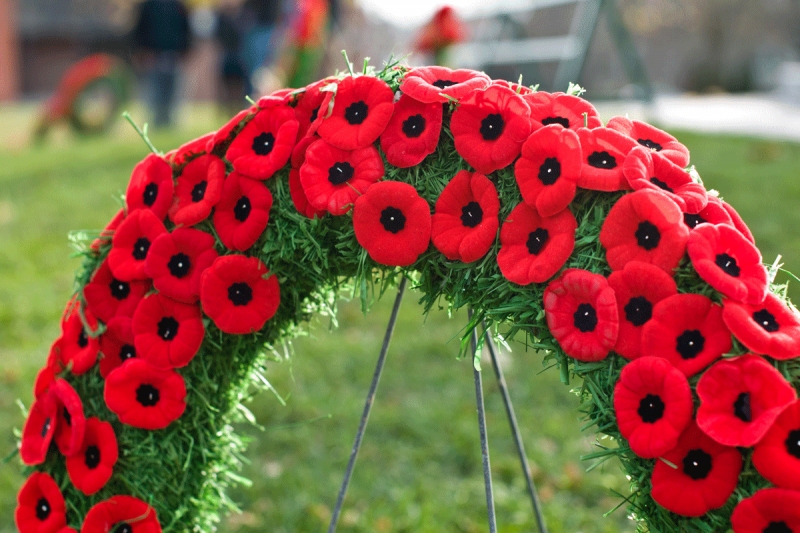 Remembrance Day falls on a Sunday this year. To mark the occasion, attend a ceremony, service or other Remembrance Day activity or event. Here are several to choose from.

The Field of Crosses

Each year, more than 3,400 white crosses are displayed along Memorial Drive to symbolize the thousands of soldiers from Southern Alberta who have died in action in various conflicts since the Boer War. Visit the site at any point to read the names, ranks, regiments, date of death and age of death of the Southern Albertan soldiers killed in action. For a truly moving experience, visit at sunrise or sunset for the flag raising ceremony that takes place daily from November 1 to 11. Or attend the Remembrance Day service on November 11.

The Hangar Flight Museum’s Remembrance Day ceremony is a popular one, so arrive early to ensure you get a seat. Make sure you also leave enough time to get settled and ready before the 10:30 a.m. outdoor ceremony begins. The museum will also be accepting Veteran’s Food Bank donations. Stay after the service to explore the museum — it is open until 4 p.m. and admission is by donation that day.

More than 33,000 CP employees served in World War I and II, and Canadian Pacific continues to commemorate them with its annual Remembrance Day ceremony. The ceremony takes place at CP’s Memorial Square, and afterwards, there will be refreshments at the Royal Canadian Pacific Pavilion at CP’s Head Office Campus. All members of the public can attend this ceremony.

This year marks the sixth annual Battalion Park Remembrance Day Ceremony, hosted by the City of Calgary. This park was a military training ground for Canadian soldiers during World War I. It features large rock formations of the numbers of four Alberta battalions that trained there: 151, 137, 113 and 51.

The City’s listed start time for this ceremony is 8:30 a.m.

Take a free guided tour of the 13-hectare Burnsland Cemetery and learn more about some of the heroes that were laid to rest here. There are more than 22,000 people buried at this cemetery, some of which are Calgary veterans from World War I. This tour is an opportunity hear some stories of non-Canadians who were buried in the Burnsland Field of Honour. Those going on the tour will meet at Galloway House, which is located inside of the Union Cemetery gate.

On November 11, Fort Calgary is hosting a Remembrance Day service that includes choral music, bagpipes and bugles. Stick around the grounds after the service for the holiday Artisan’s Fair. More than 60 local crafters and makers will be selling their products, which include jewellery, artwork, woodworking and more. Admission to the fair is free if you bring along a non-perishable food item for the Veteran’s Food Bank.

This Remembrance Day service will be held in the gymnasium at Kerby Centre in downtown Calgary. Plan to be there for the ceremony at 10:50 a.m., then stick around afterwards for refreshments. Johnny Summers and Egor Ukuloff will also be there performing live music.

Remembrance Day at the Military Museums

This formal service takes place outside of the museum. Dress in warm clothes and bring along coffee or hot chocolate for the service. Also, bring along a non-perishable food donation for the Veterans’ Food Bank. Be sure to explore the museum after the service; admission is free for the day.

The service begins at 10:30 a.m. Arrive early, as this ceremony is usually very popular.

This public Remembrance Day ceremony is hosted by the Calgary United Veterans Association. The one-hour, indoor ceremony starts at 10:30 a.m. and features a laying of wreaths, music and speakers. Afterwards, there will be an outdoor march past (parade) around the Jubilee Auditorium. Tickets for this ceremony are free.

Mount Royal University’s Kantorei choir and the Calgary Youth Orchestra collaborate for a performance in recognition of Remembrance Day. They’ll be performing The Armed Man: A Mass for Peace by Karl Jenkins for the occasion. Children 12 and under are admitted for free, but still require a ticket reservation. This show starts at 7:30 p.m.

If you’re in transit on Saturday, November 11, you still have the opportunity to pause and reflect. The YYC Calgary International Airport’s ceremony is taking place on the Departures level of the Domestic Terminal. The ceremony will feature the Calgary International Pipe Band and Honour Guard, as well as speakers Constable Mike Bertin and a representative of the Calgary Airport Authority.

How to Golf Safely at City of Calgary Golf Courses