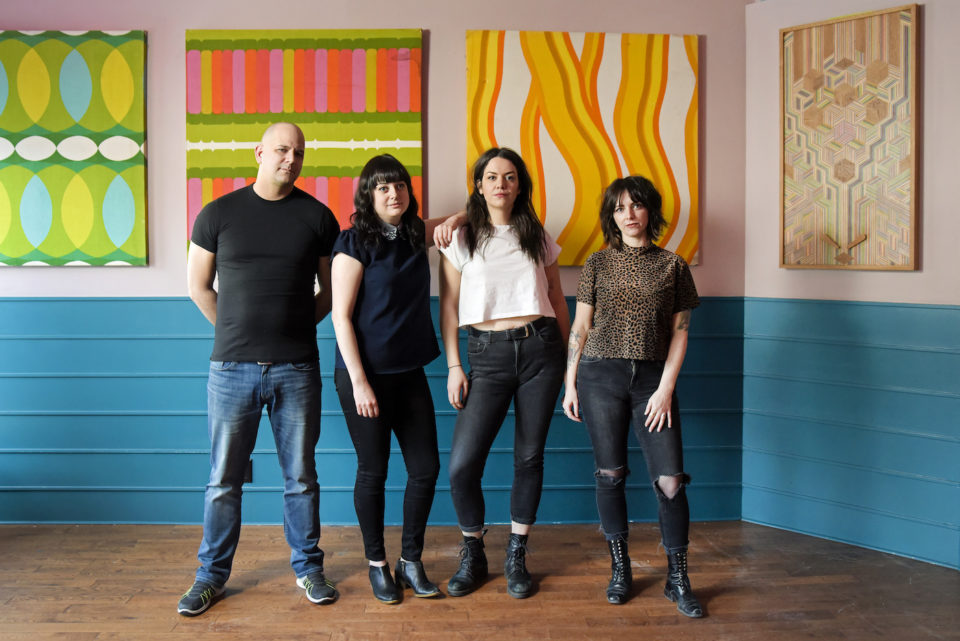 The Shiverettes are heading out across Western Canada after a record release show at the King Eddy on April 18. Photograph by Elizabeth Cameron.

“Spiteburger” recounts an experience where members Hayley Muir (lead vocals), Kaely Cormack (guitar and vocals) and Cecilia Schlemm (bass and vocals) went a little over the top on bottomless mimosas during brunch in Venice, CA. They were sprawled out by the beach hankering for some In-N-Out Burger when, all of a sudden, a few members of the LAPD crossed their path. To their surprise, the officers were flirty, and more than happy to escort them along to a nearby franchise.

“Partway through the process, we all kind of started to sober up… Hayley gets very mad, just of nowhere,  and goes and sits on the other side of this glass window eating her burger, very spitefully,” recalls Cormack. “So, we called it ‘Spiteburger.'”

Like many Shiverettes songs, the tune contains a titillating amount of sarcasm that runs concurrent with social critique. Why were these officers flirting with intoxicated tourists while on the job? Would the group have been treated differently if they weren’t white? After soliciting an initial laugh, the lyrics of the song implore the listener to pose questions like these.

That’s been the case since Cormack and Muir formed the first incarnation of the band in 2013. Its first recorded release in 2015  (Schlemm and drummer Steve Richter having joined the fray in 2014) was a song with a name too explicit to reproduce in this article. Suffice to say, it’s a vulgar taunt at then-Prime Minister Stephen Harper. The track definitely got some laughs, but showed that The Shiverettes were not going to mince words when it came to their beliefs.

This was close to the time that Muir and Cormack launched the first Femme Wave festival in November 2015. The two were fed up with always seeing the same people on stage at every show — specifically white, male, cisgender people. They decided they would do their part to broaden that landscape and launched Femme Wave to carve out a welcoming space for a diverse range of women and non-binary artists on stage and in spectator roles.

Sure, there are those that mock the idea of “safe spaces.” But perhaps they’d benefit from hearing the story behind the new album’s song, “Very Cool Dude.” It was written about a series of incidents that took place when The Shiverettes performed at an unnamed venue a few months after debut album Dead Men Can’t Catcall was released. After drinking a round of shots, they say their bartender remarked (in a fashion he surely thought was hilarious) that he had just spiked the drinks with date-rape drugs. Later, one member recounts a senior staff member repeatedly making unwanted advances towards her, asking her over and over to go to a private room with him. If it happened to you, you might want a safe space, too.

The Shiverettes are well familiar with incidents like these and the detractors who minimize their experiences. Case in point, the decision to use title Real Shrill Bitches as this new album’s title. It’s the kind of language they’re too used to hearing being directed their way, and using it for the album is an act of reclamation.

“I think we could all be honest and say those things hurt our feelings at first, for sure. They affect us, they hurt, they sting. And then at a certain point it’s like, ‘well, [expletive] you man,'” says Muir. “You think I’m a shrill bitch? Then I’m just going to be that even more. I hope it just makes you mad that I’m [expletive] cool with it.”

Most Shiverettes songs deal with difficult subjects, but that doesn’t mean there’s a cloud of gloom hanging over their heads. Members agree it’s “cathartic” to write and perform songs about things people tend to repress rather than express. They say audience members have routinely come up to them after shows to tell them how much it means to hear their own concerns being proudly addressed from the stage. It’s this type of connection that leads Cormack to describe the circles of allies they’ve forged in Western Canada as a “feminist army.” This “army” comes in handy when touring, as its network will direct them to great venues and bands to support. Similarly, it will warn the group about places and people to avoid.

“[A friend] told us about a venue that we were going to play where the owner had hit a girl across the face with a drink tray and knocked her teeth out,” begins Cormack.

“So, we didn’t play there,” Muir dryly concludes.

And tour they shall. The Shiverettes are trekking from Calgary to Winnipeg with stops along the way and on the route back. You can send them off with the record release show taking place Thursday, April 18 at the King Eddy with guests Wares and Mademoiselle. The new album will be available on CD and vinyl at all shows, and can also be purchased via Bandcamp.