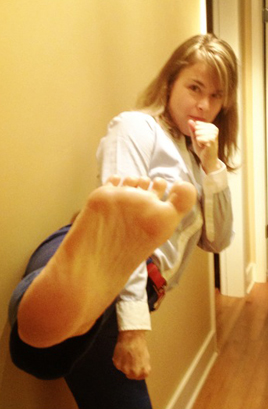 When it comes to exercise I’m a lover, not a hater. I’m a yoga teacher and I teach or practice almost everyday. That being said, I’m not constantly in a state of self-contentment and bliss. I once fumed for the first 45 minutes of my Ashtanga class because a woman with outrageously long toe hair stepped all over my mat. In fact, I practice yoga to quiet my inner beast, so a mixed martial arts (MMA) conditioning class seemed like an interesting exercise in restraint.

I don’t know a lot about MMA. I’ve caught matches on the flat screen at pubs and I’ve always felt a little uncomfortable watching shaved-head, sweaty, muscular men roll around in a cage. But I was curious, and in the spirit of mixing up my workout and spending some quality time with my husband, Stafford, I thought I’d give it a go.

We arrived for the 5 p.m. drop-in MMA Conditioning class at Independent MMA with a little trepidation. Stafford is an Ironman athlete and former hockey player but I could tell he was a little uneasy about the possibility of being thrown into the sparring ring with Ryan, our strapping instructor who met us in the lobby.

You won’t find a boxercise or Zumba class at Independent. It’s a no-frills gym where some of Calgary’s top MMA athletes train, and the words “Bleed in the Dungeon and Laugh in the Battlefield” are painted on the walls. I was prepared for a challenge and possibly a little name-calling.

Over the next hour, my previous assumptions about MMA and MMA athletes were obliterated.

MMA is a mindfulness practice

MMA athletes are surprisingly calm, relaxed and non-reactive because they work to create a flexible, focused state of mind. It’s not unlike what I practice in yoga, but fighters put themselves in extreme situations, like choke-holds or armlocks, and train to not react with fear or anger.

The writer practices her high kick.

It’s not just about brute strength. Fighters are extremely present in their bodies in order to kick and punch with power and accuracy and defend an attack with cat-like reflexes. Ryan demonstrated one handed push-ups and jump squats without breaking a sweat. For reals.

It combines bootcamp-style exercises with martial art moves. I lunged, kicked, punched and pushed-up myself into three days of muscle soreness. It’s challenging for the whole body and kicking and punching Stafford, safely with padding of course, was deeply satisfying.

I recently bought tickets to a live MMA fight at the Telus Convention Centre featuring fighters from Independent MMA. I did bleed with them in the dungeon, or at least I got really, really sweaty, so I feel like I should be there to cheer them on in the cage.