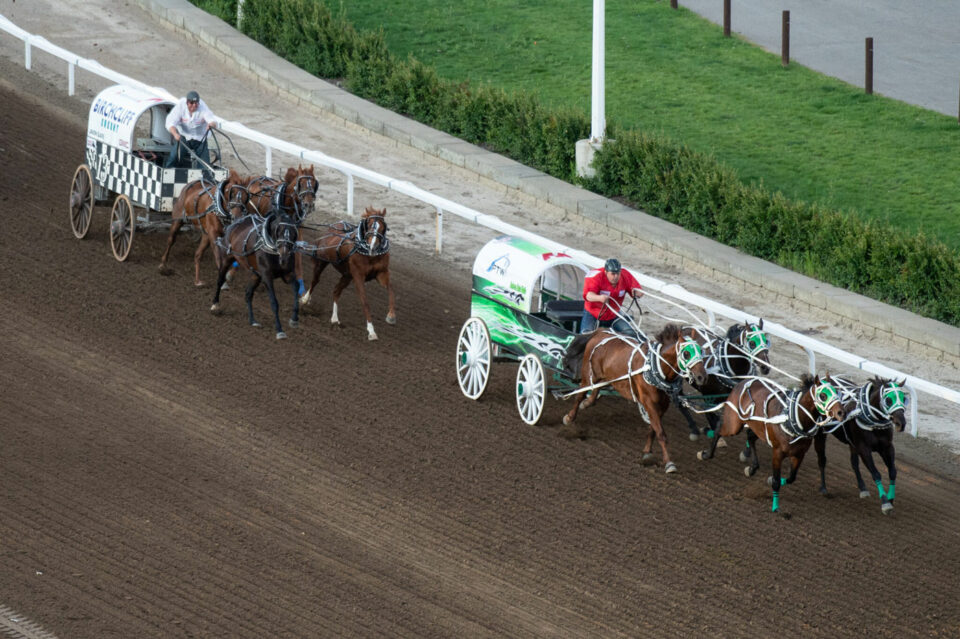 Photograph courtesy of the Calgary Stampede

In 1923, the first-ever chuckwagon race was held as a spectator sport in Calgary. Now known as the Cowboys Rangeland Derby, the event takes place at the Calgary Stampede and is classified as one of the most famous and prestigious chuckwagon races in the world.

The event has been on hold over the last two years, but this year, the Stampede chuckwagon races have returned and fans can once again watch nightly as 27 drivers, outriders and 162 horses “vie for prize money and bragging rights.”

Here’s a look at what you should know before attending the 2022 Cowboys Rangeland Derby.

Where to watch the races

The chuckwagon races take place nightly from July 8 to 17 starting at 7:45 p.m., just before the Grandstand Show begins. The races are held at the GMC Stadium on the Stampede grounds, with seated tickets ranging from $60 to $140. Standing room on the tarmac can be purchased on the day of the event for $20 at the stadium. Tickets purchased beforehand include admission to Stampede Park and all tickets include the Grandstand Show as well.

Alternatively, you can also watch the nine nightly heats from the comfort of your home. Until July 16, tune into Sportsnet One at 8:30 p.m. to watch the races from home.

The Rangeland Derby is a thrilling event to watch. When the horn blows, the outriders all perform a move called “breaking camp,” in which they throw a “stove” into their team’s wagon before mounting their horses. This is all done as quickly as possible. Then the chuckwagon drivers guide their horses in a figure eight pattern around two barrels before making their way onto the track. The Calgary Stampede track is proclaimed by the World Professional Chuckwagon Association as the “half-mile of hell.” On this track, competitors ride around the track at nearly 65 kilometres per hour.

What is an outrider

An outrider’s most visible role is to load the stove in their team’s wagon as the race begins. However, there is actually much more that an outrider must do throughout a race in order to ensure a successful night.

Before the horn blows to mark the start of the race, the outrider’s job is to steady the horses. While the race is happening, their job is basically to be an extra set of eyes on the track. They have to meticulously watch their team’s driving horses to make sure that they are not having any difficulties and watch the other chuckwagons to make sure they continue to have the right of way as the outriders are riding 150 feet behind.

The horse that the outrider rides on for the race belongs to the chuckwagon driver, meaning the horse is trained to work with that team and not necessarily the outrider. Therefore, outriders have to be very talented horsemen to work with multiple different horses who all have different personalities.

What has changed for the Rangeland Derby since 2019

The Cowboys Rangeland Derby has not happened since before the COVID-19 pandemic, and a few rules and protocols have been changed for this year’s event. Most prominently, for the first time, this year only three wagons are allowed on the track instead of four (which has been the tradition for years). This regulation was put in place in an attempt to help reduce the risk of injuries on the racing horses at the event. There are also new permanent foam bars alongside one lane on the track, which were installed to give riders a cushion if the track get tight.

Where to watch more chuckwagon races after Stampede

Although the Cowboys Rangeland Derby is classified as the biggest race for chuckwagon drivers, there are quite a few other rodeos throughout Alberta that host chuckwagon races. The Battle of the Foothills in High River (July 21 to 24), the Strathmore Stampede (July 29 to August 1) and the Battle of the Rockies (August 18 to 21) are three other options to see chuckwagon races in Alberta.