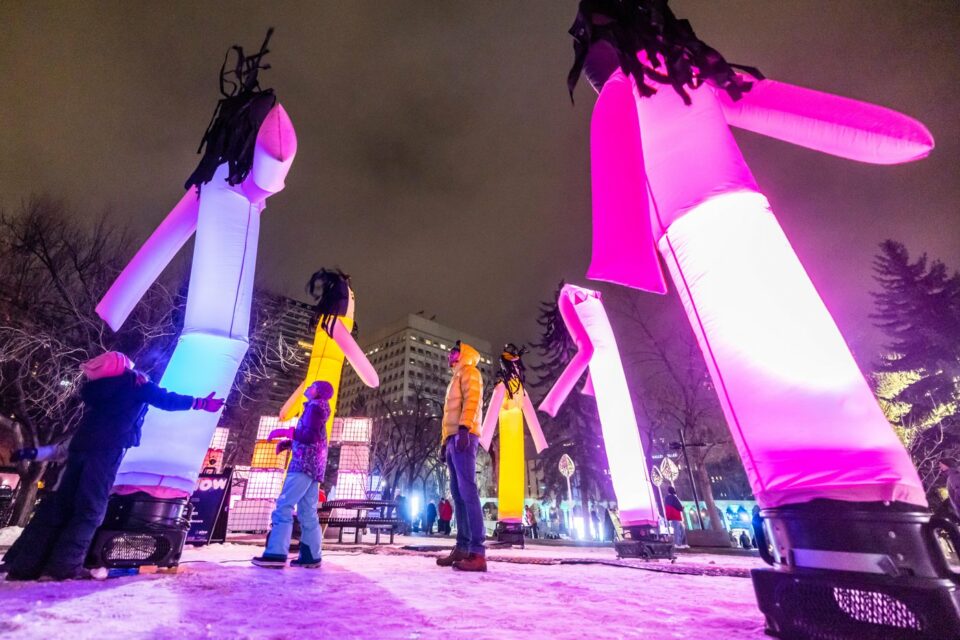 Some of the lighting displays at Chinook Blast 2022. Photograph by Neil Zeller.

One Yellow Rabbit’s High Performance Rodeo is a multidisciplinary arts festival featuring an array of live productions, from dance and music to theatre, puppetry and more. Don’t miss your chance to check out one of the many experimental and contemporary works on offer. Single event tickets are available, or you can purchase a flex pass, which includes four tickets for the performances you want to see. Check out the full lineup online.

Whisky lovers, unite! In support of the Multiple Sclerosis Society of Canada, Calgary Whisky Fest, taking place at Arts Commons, will feature hundreds of different whiskeys to sample from more than 40 vendors. “Master Class” ticket holders will also be able to attend classes and learn about how whisky is made, what makes different whiskeys special and more. Hors d’oeuvres will be served throughout the evening, as well.

Born as a way to celebrate Calgary’s live-music scene even in the depths of winter, Big Winter Classic brings music, arts and culture together in the Beltline. As a feature event of Chinook Blast, this festival consists of five days of music and comedy shows at local bars and breweries to get Calgarians out of their homes for some Big Winter fun.

One of Calgary’s biggest winter festivals, Chinook Blast returns to the city for its third year. The massive celebration features live music, light installations, art presentations, cultural performances, sporting events and more — all taking place throughout the downtown area. From January 27 to February 12, head to Stephen Avenue and the surrounding area to take in the festival’s popular (and instagrammable) light and art installations, or check out high-adrenaline events like the Nitro Rallycross or the Snow Rodeo.

Love poutine? Of course you do. There’s no better food combination than crispy fries, melty cheese curds and warm gravy, and during La Poutine Week, local restaurants will offer an array of creative poutine options. A full list of participating restaurants will be released closer to the event date.

The 19th edition of this popular event showcases the work of photographers, both local and international, at exhibitions held throughout the city, including at venues such as the Calgary Central Public Library and Lux Laundromat. Plus, as part of the festival, an outdoor exhibition titled Exposure Fence: People & Place will be held at Olympic Plaza in partnership with Chinook Blast.

Held in partnership with Meals on Wheels, YYC Hot Chocolate Fest is an annual event in which local restaurants, cafes and chocolatiers compete to create the best hot chocolate in the city, decided by Calgarians. A full list of participating businesses will be released soon, but winners from 2022 include Cornerstone Music Cafe, Kristi YYC and Hexagon Cafe. Partial proceeds from hot chocolate sales go toward supporting Meals on Wheels, with nearly $80,000 raised for the charity in 2022.

Presented by Calgary Folk Fest, Block Heater, now in its eighth year, defies the idea that music festivals should only take place in the summer. This year’s event will consist of 32 musical performances by artists such as Hawksley Workman, The Milk Carton Kids, Amy Nelson and more. Shows will take place at venues throughout the city, including the free stage at Olympic Plaza. See the full 2023 lineup of musicians online.

Head to the BMO Centre on February 17 and 18 for Winefest Calgary, a celebration of all things vino. Have a wine in mind you’ve always wanted to try, but can’t bring yourself to buy a full bottle? Here, you can sample hundreds of different wines from regions around the world while also enjoying a selection of small bites from local restaurants and food producers.

One of the local events marking Black History Month, Ethnik Festival of Arts & Culture celebrates the voices and cultural traditions of Alberta’s African and Caribbean communities. For the Calgary Food War portion of the festival on February 24, four local chefs will compete in a competition hosted by chef and television personality Roger Mooking. The main event will take place on February 25, with art, dance, music and other cultural presentations. Ethnik Festival will also be live-streamed for those who are unable to attend in person.