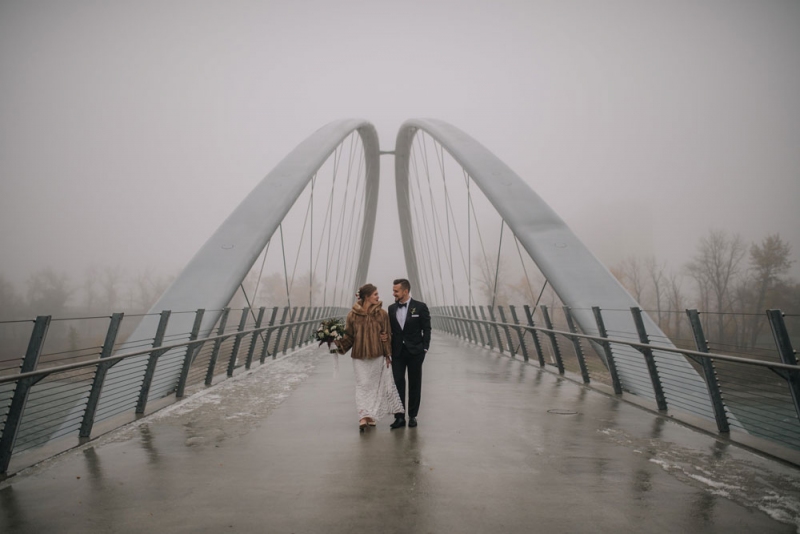 All photography courtesy of Dana Cole of Gabe McClintock Photography

Kealan and Conrad Corbiere’s relationship began with learning how to fight. The couple met at World Health Club where Conrad was a Muay Thai instructor and Kealan began training in the discipline. Today, the couple still throw punches as co-founders and instructors at Rumble Boxing, and last fall, over the Thanksgiving long weekend, they tied the knot.

“Having our families together was what Thanksgiving meant to us,” Kealan says. “We envisioned a beautiful Thanksgiving meal. Not compromising on really good food was a big one for us. So we picked a number of guests we could afford.”

Once the couple decided on a number, 30 people which included their nearest and dearest friends and family, they went in search of the perfect venue. Rouge Restaurant was an obvious match. “The food is exceptional. The venue is intimate. We wanted to get married outside and the garden is beautiful. Rouge was a natural fit,” says Kealan.

For guests that couldn’t attend the Saturday dinner on October 8, the couple hosted an afternoon cake cutting and evening dance party the following day, which was essentially a reception for friends.

When their wedding weekend arrived so did the unexpected snow and cold weather. It was definitely a surprise and almost derailed the couple’s plans for an outdoor ceremony. Instead, they reminded guests to dress warmly and the dramatic fog and overcast skies made for stunning pictures.

“It ended up being more beautiful than it would have been if it had been sunny bright way. I can’t picture it any other way now. It was perfect in the end,” says Kealan. 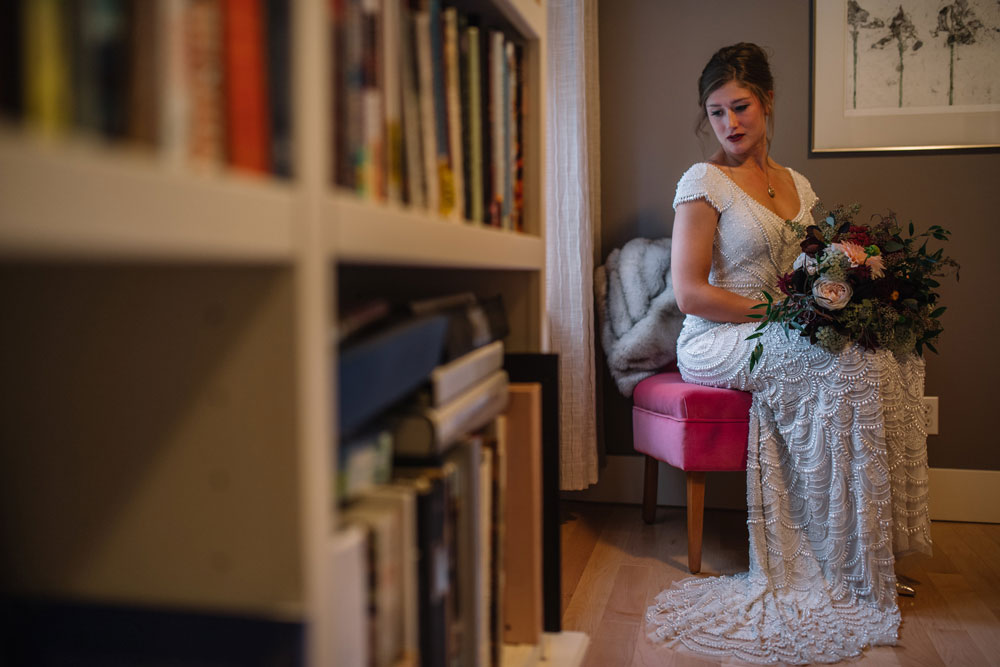 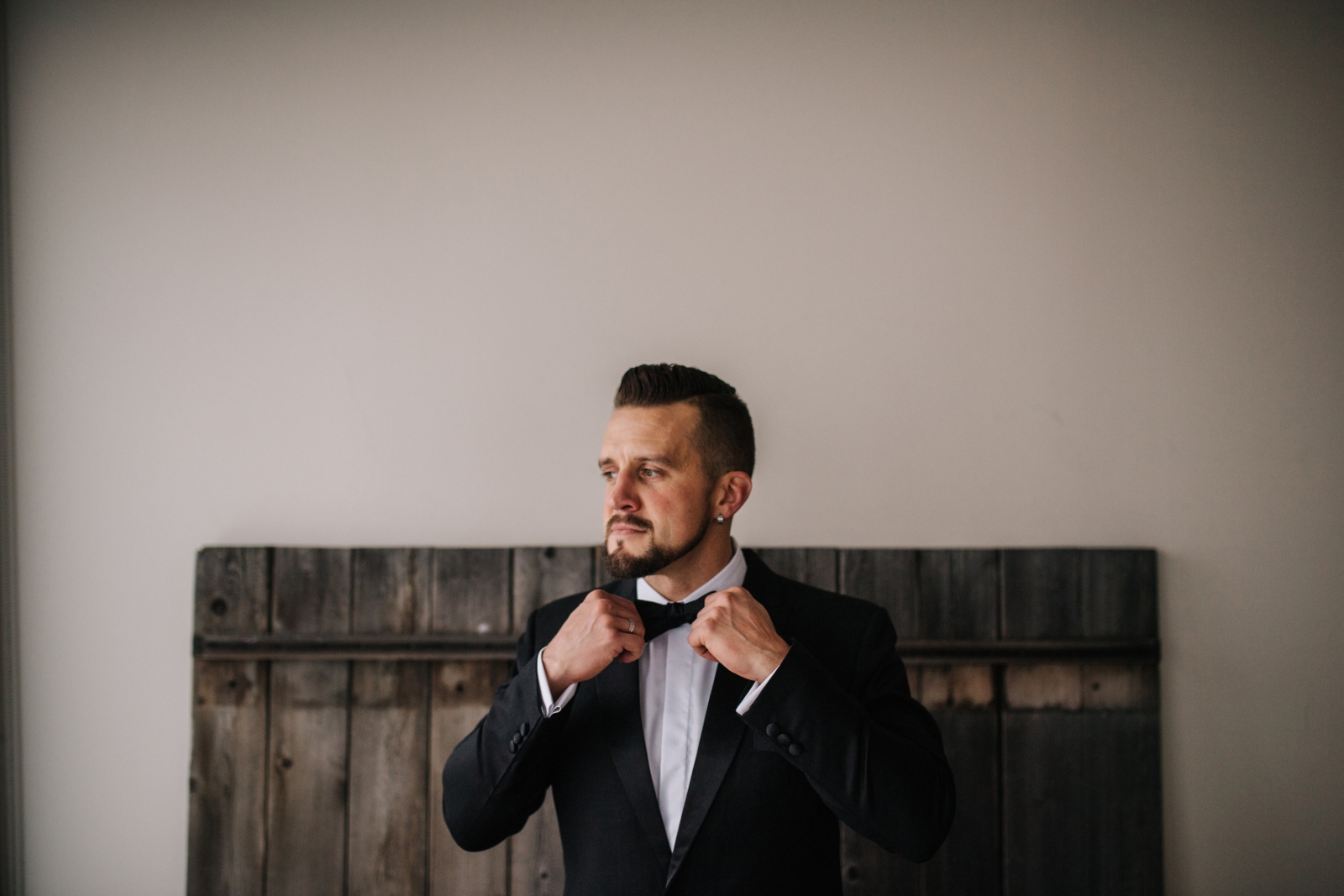 The groom’s suit was custom-made in Thailand. Conrad took a last minute online tutorial for how to tie his bow-tie the morning of the wedding. 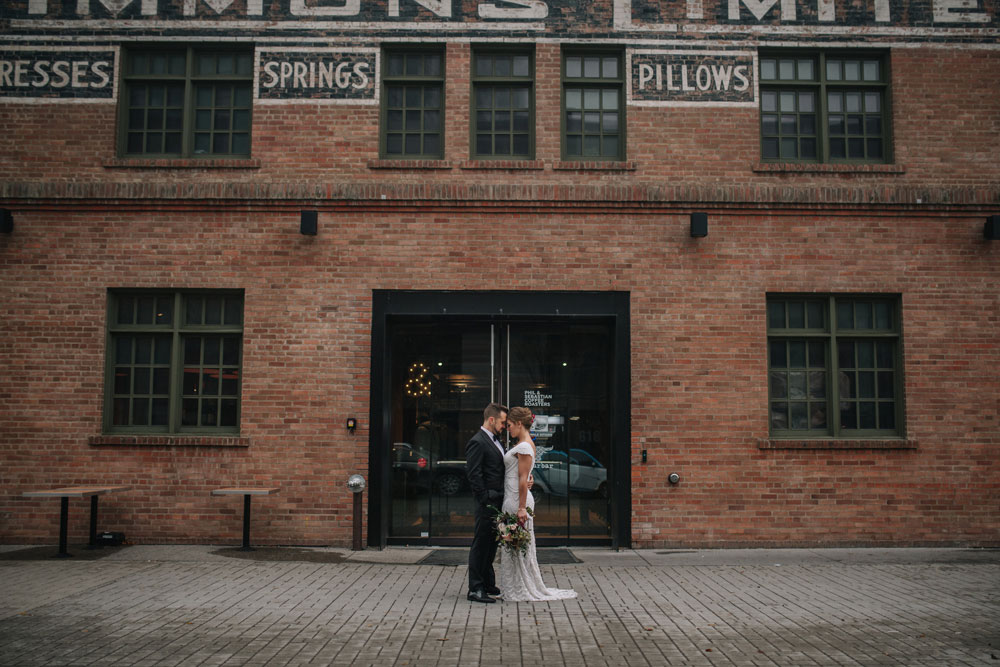 Kealan and Conrad took photos in the East Village, including outside the Simmons Building, before the ceremony. The first look moment was one of Kealan’s favourite of the day. The couple popped into Phil & Sebastian Coffee Roasters for an Americano to warm-up halfway through the shoot. 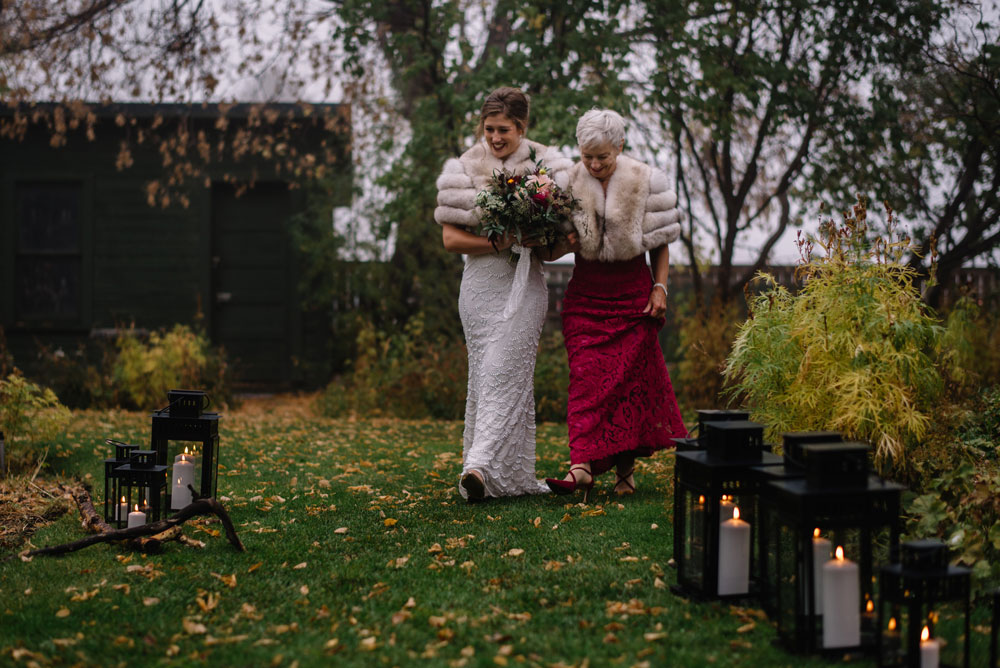 The bride and her mother wore vintage, re-worked silver fox capes. Benzing Charlebois Furs turned the original fur coat into three separate pieces including one for the bride’s sister. The mother of the bride found her pink lace gown at Nordstrom at Chinook Centre. 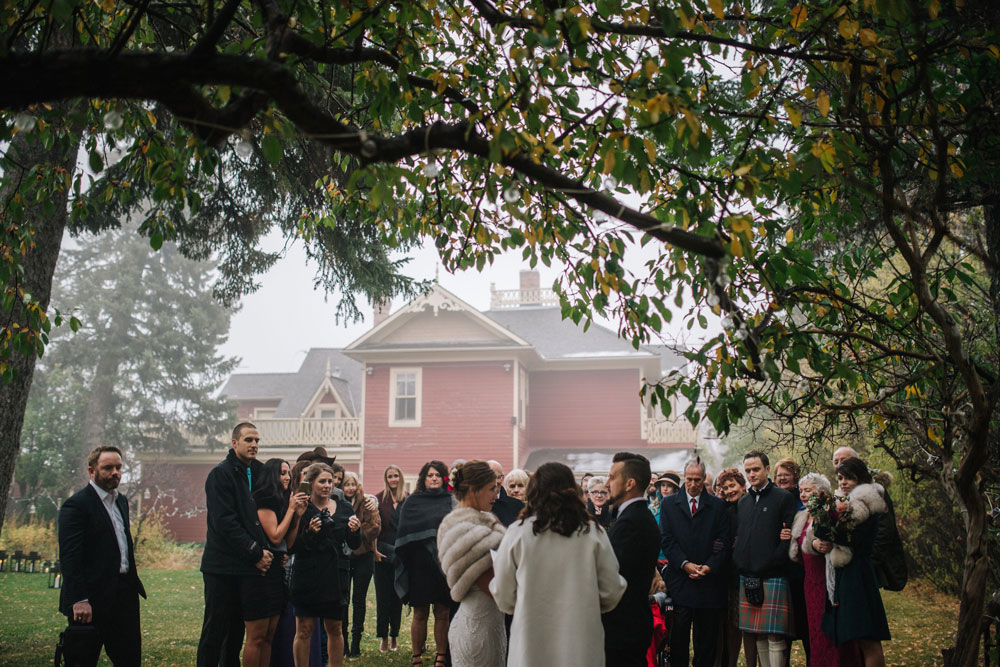 The ceremony was held outside in the garden at Rouge. Lanterns with candles provided ambience and a close family friend served as the officiant. 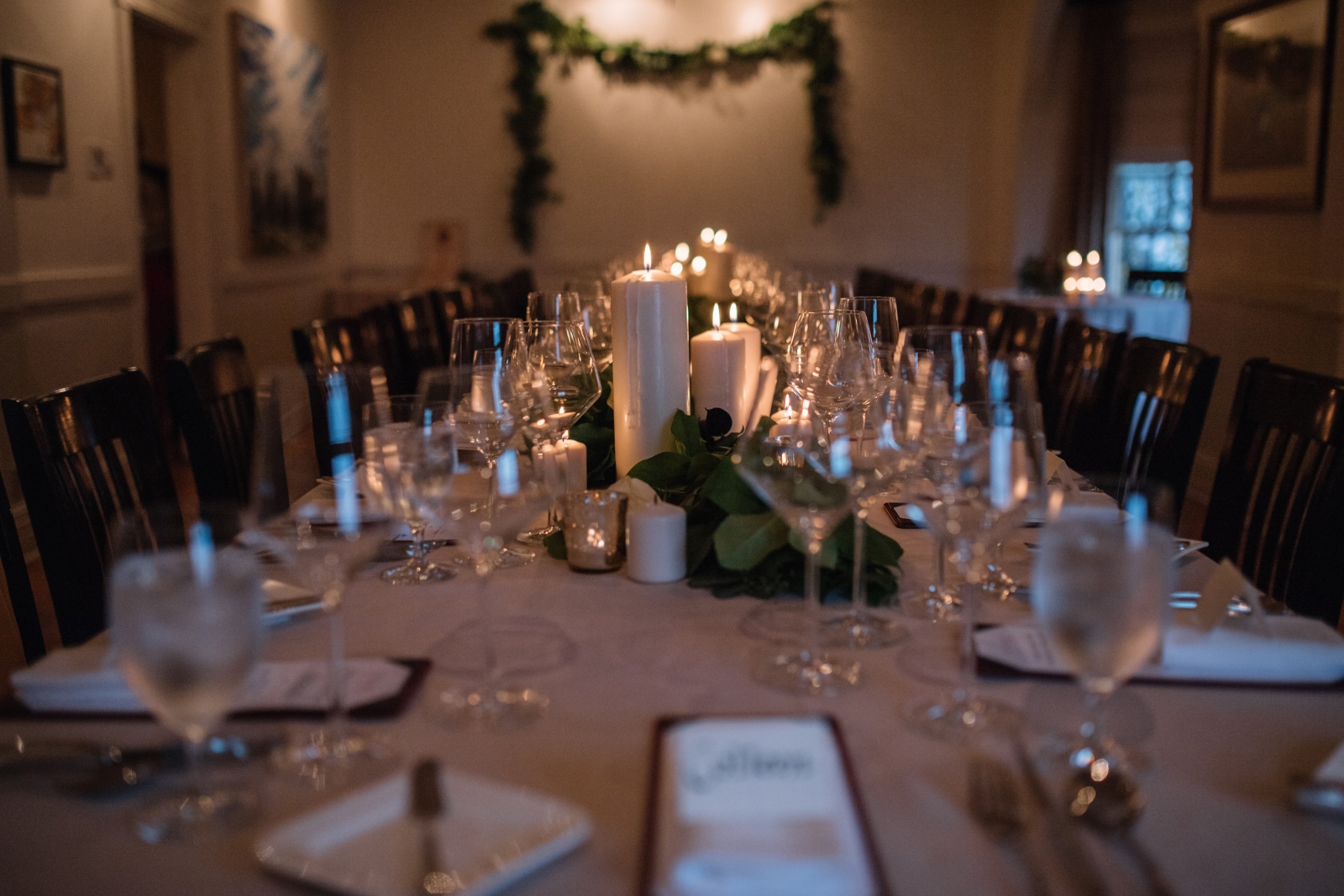 The table was set for 30 with handwritten seating cards for each guest. The dinner was held in the large galley private room at Rouge Restaurant. 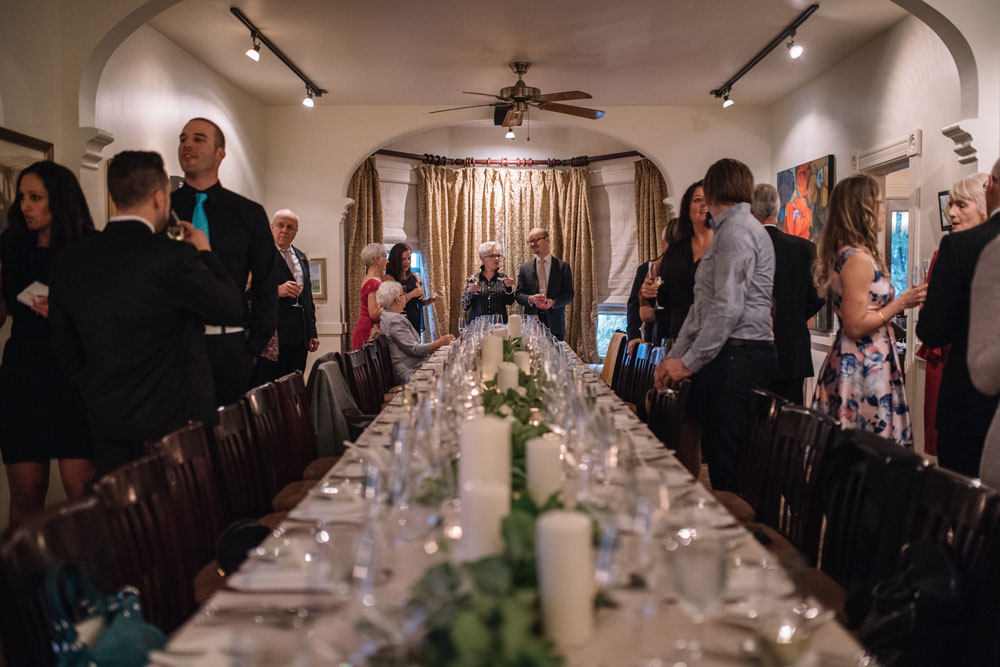 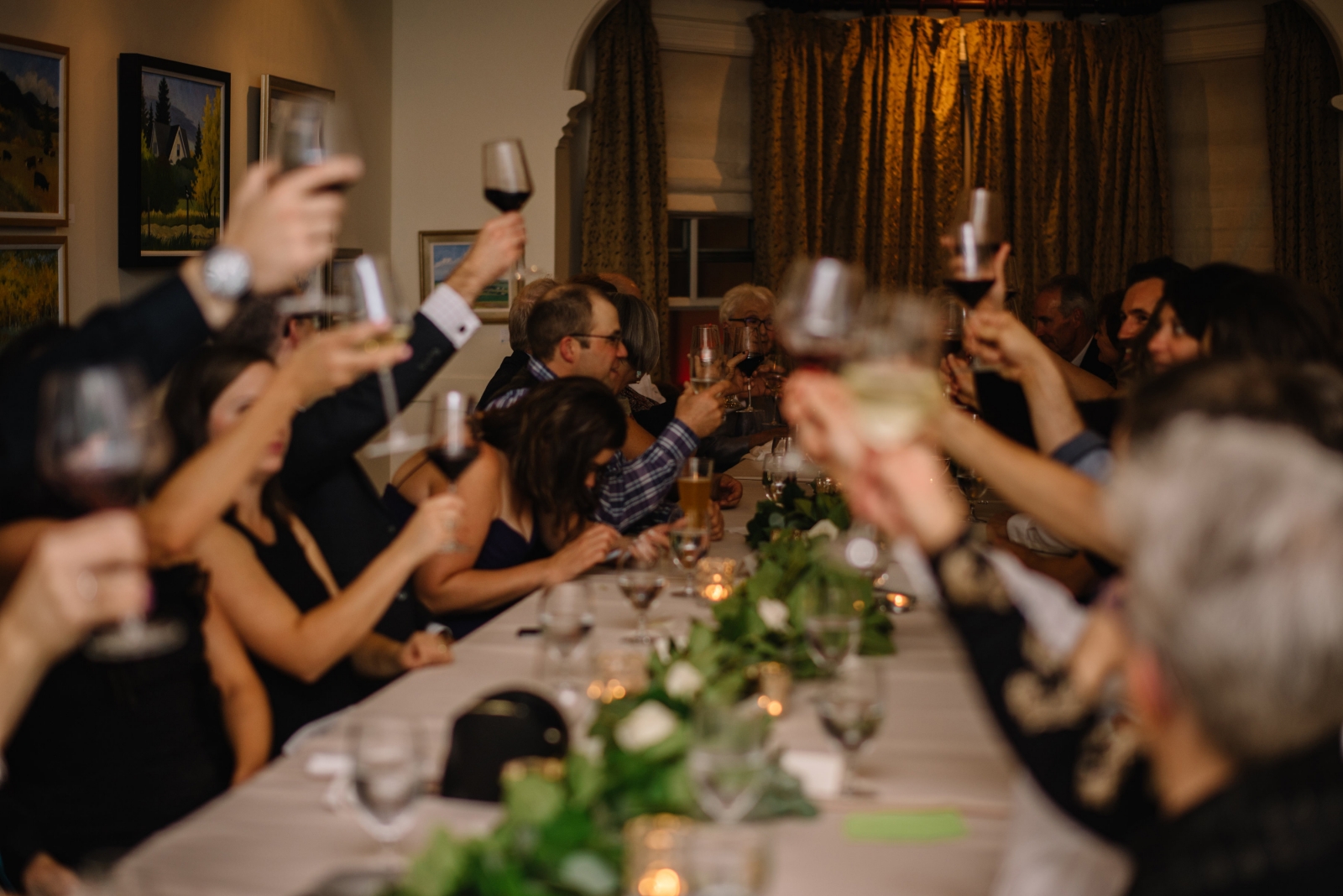 The multi-course dinner included a salad and soup course and a choice of fish, tenderloin or duck. White and red wine were poured throughout the evening. The following day the couple held a cake cutting with a lemon curd, pound cake made by the bride’s sister. 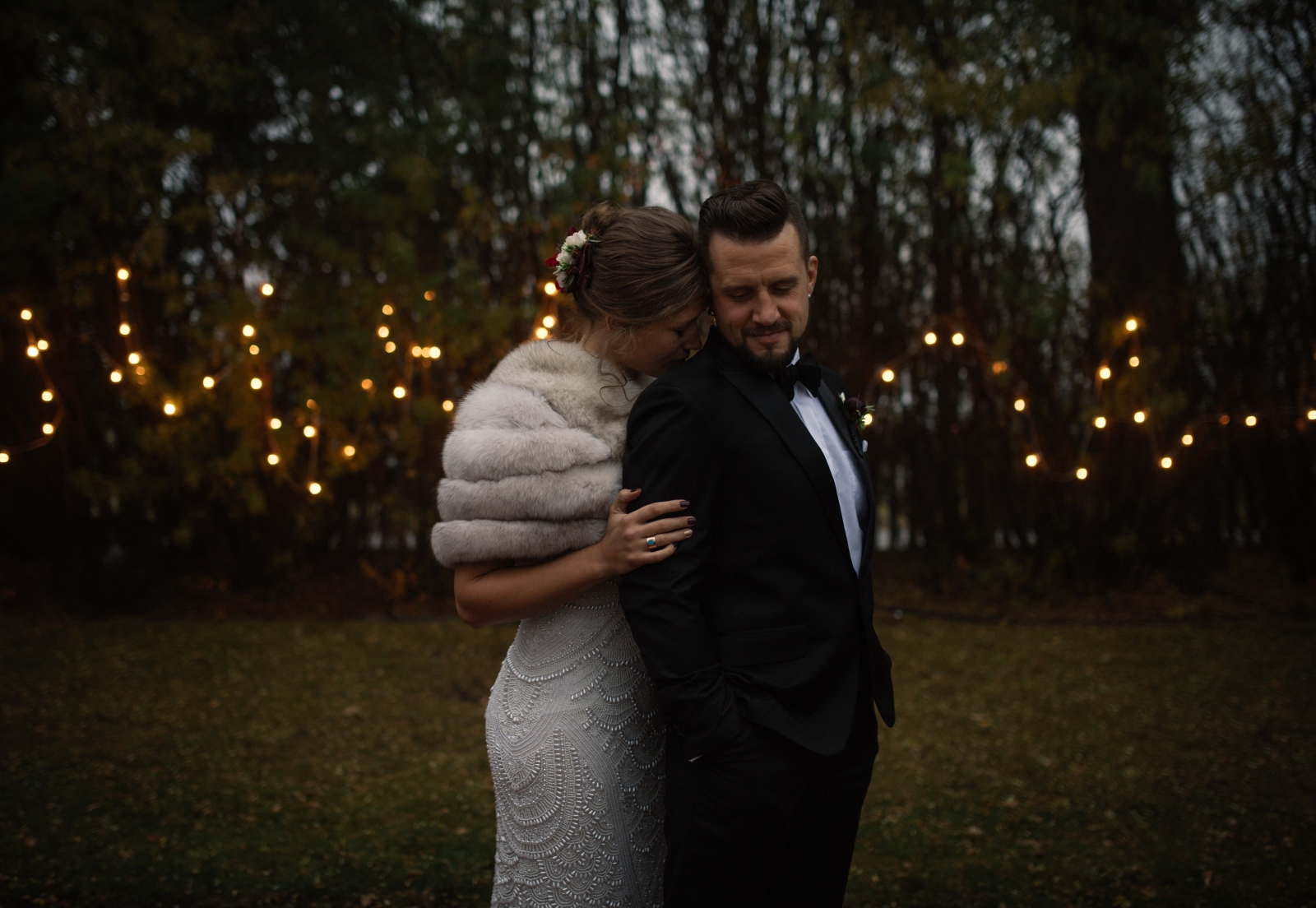 The unexpected chilly weather didn’t put a damper on the day. Instead the fog and overcast skies created dramatic and romantic photos, including this one taken in the gardens at Rouge.