The perfect home in the perfect neighbourhood depends on who you are. If you value a single detached home with a rising property value, chances are you’d be looking for a home in a different neighbourhood from someone looking to rent an apartment that’s close to restaurants and bars and boutiques.

We can’t tell you which neighbourhoods are the best when it comes to housing. You need to decide that on your own. But to give you a better idea of what housing in Calgary looks like, we took a closer look at some factors that are probably significant to you. We looked at where the most single-family homes and apartments are, where the owners are and where the renters are, changing property values and population density.

The 5 Calgary neighbourhoods with the most single-family homes

If apartments aren’t your thing, know that the two Calgary neighbourhoods with the most single family homes in 2015 were both in the city’s northwest quadrant: Tuscany and Panorama. Tuscany, Panorama and Evergreen also all make the list of the biggest communities population-wise in Calgary. In 2014, Panorama had a population of 25,130 (the biggest in Calgary), Evergreen had 21,386 (second biggest in Calgary that year) and Tuscany had 19,465 (the fourth biggest neighbourhood that year).

Percentage of single-family home owners in those neighbourhoods

The 5 Calgary neighbourhoods with the most apartments

When it comes to apartments, it’s a different story. It turns out, Calgary has a lot more apartments than single-family homes. And it makes sense that the majority of the apartments are in the Beltline, close to the hustle and bustle of downtown. If you look at who’s living in these apartments, you’d see that the median age of Calgarians in this neighbourhood is 33 years old, 87 per cent of the whole Beltline population is ages 20 to 64, and 76 per cent of couple families don’t have kids at home.

The Beltline has about three times as many apartments as the neighbourhood with the next most – the Downtown Commercial Core.

Percentage of owner-occupied apartments in those 5 neighbourhoods 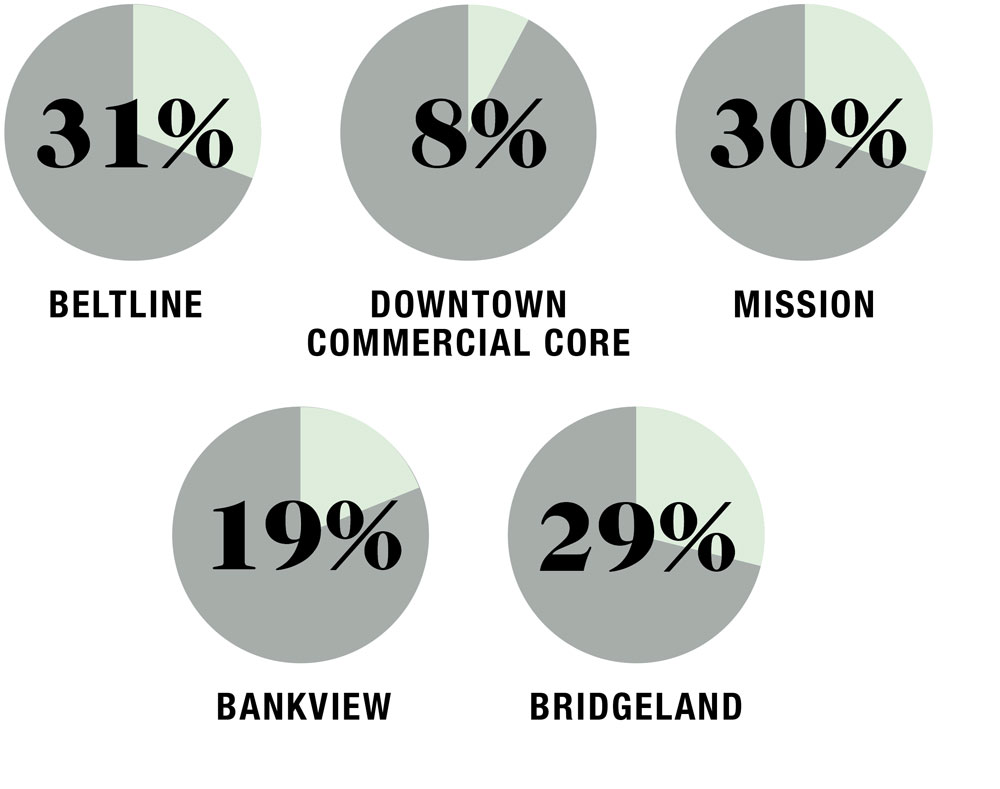 It’s been a good year for Christie Park and Altadore. But for Bayview, Kelvin Grove and Scarboro/Sunalta West? Things weren’t as rosy for people looking to sell. 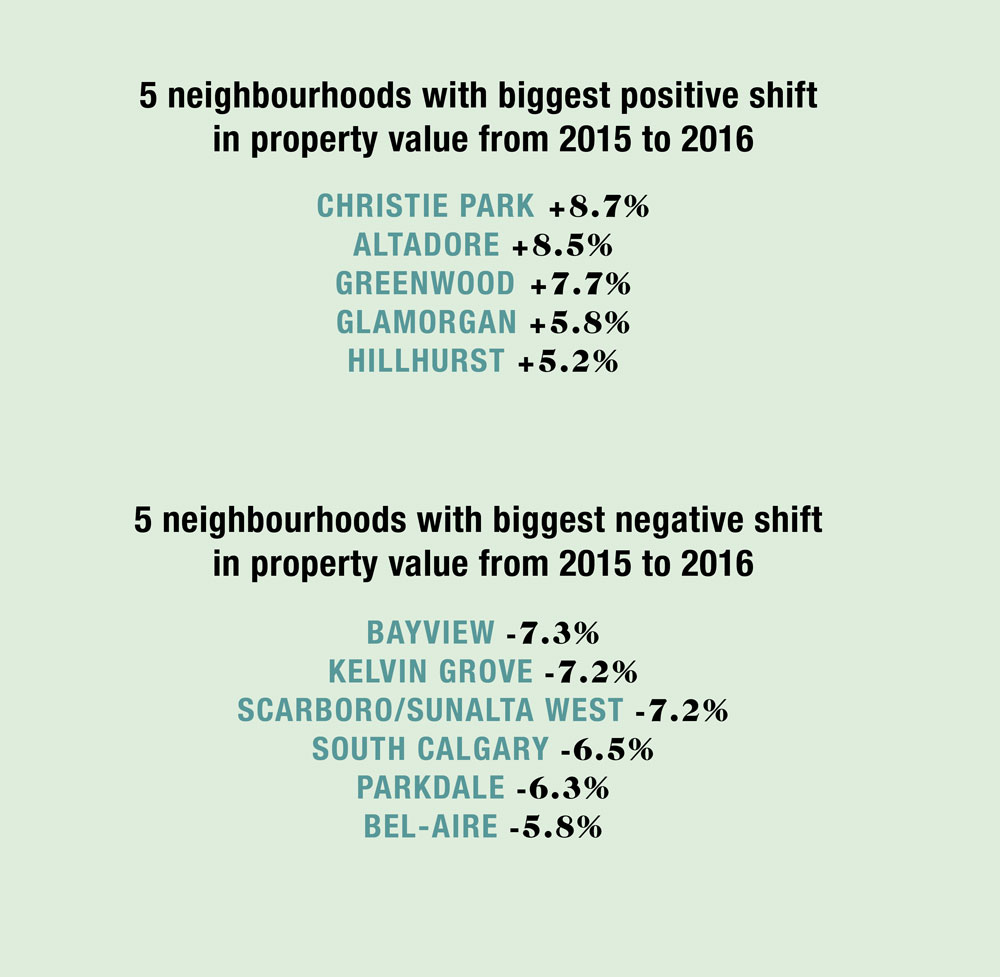 The 5 neighbourhoods with the most expensive homes 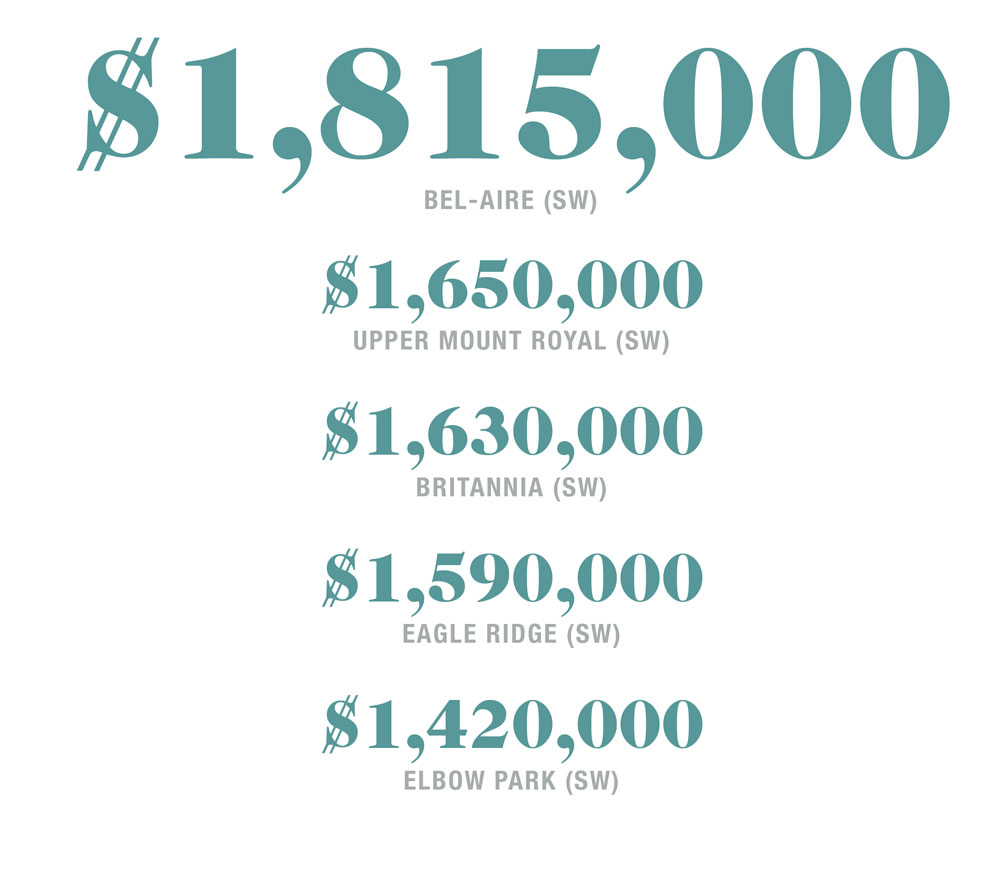 The most expensive average home prices in Calgary’s four quadrants

The 6 neighbourhoods with the most schools

While Coral Springs and McKenzie Lake have the most kids at home, these aren’t the neighbourhoods with the most schools. The neighbourhood with the most elementary, junior and high schools is Huntington Hills. In this ‘hood, the average number of people per family (according to the City of Calgary 2011 census) is 2.8, 50 per cent of couple families have kids at home and 20 per cent of the population is ages 0 to 19. 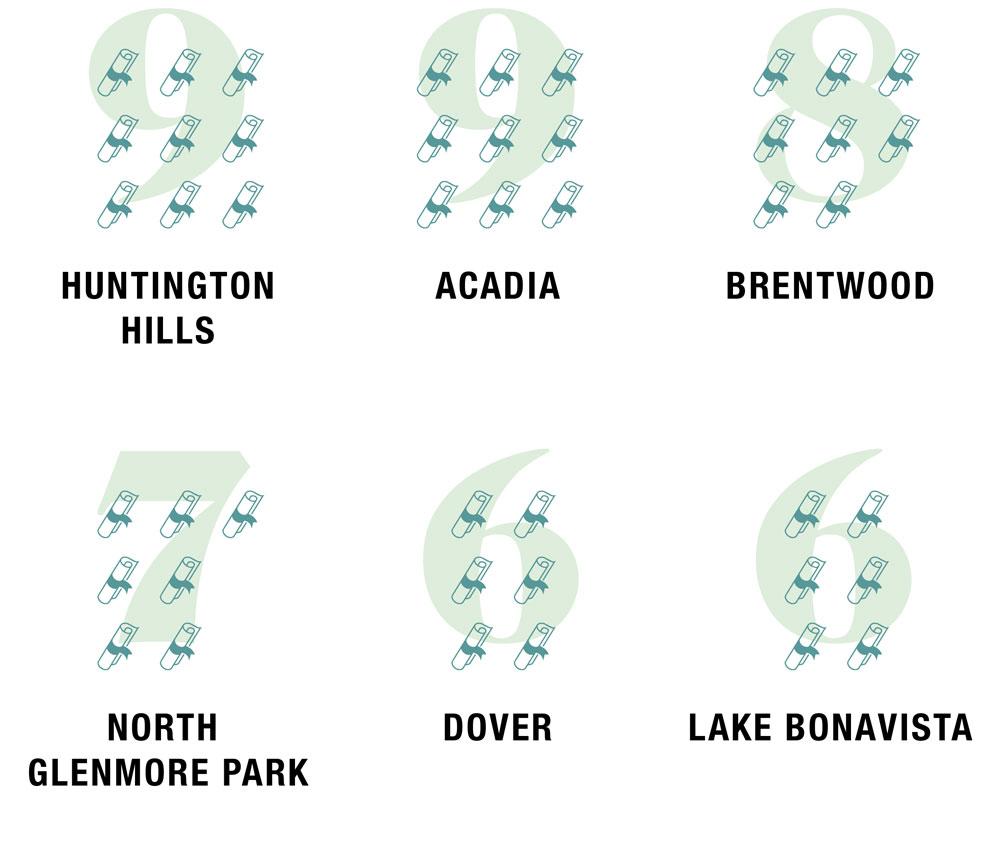 Source: Calgary Board of Education 2015.

The 5 neighbourhoods with the most nursing homes

The neighbourhoods with the most engaged citizens

For the purposes of Avenue’s survey, engagement is based on voter turnout in the 2013 municipal election, weighted per capita. In Panorama Hills according to the City of Calgary 2014 census, the median age of residents here is 32 and 63 per cent of the population is aged 20 to 64. 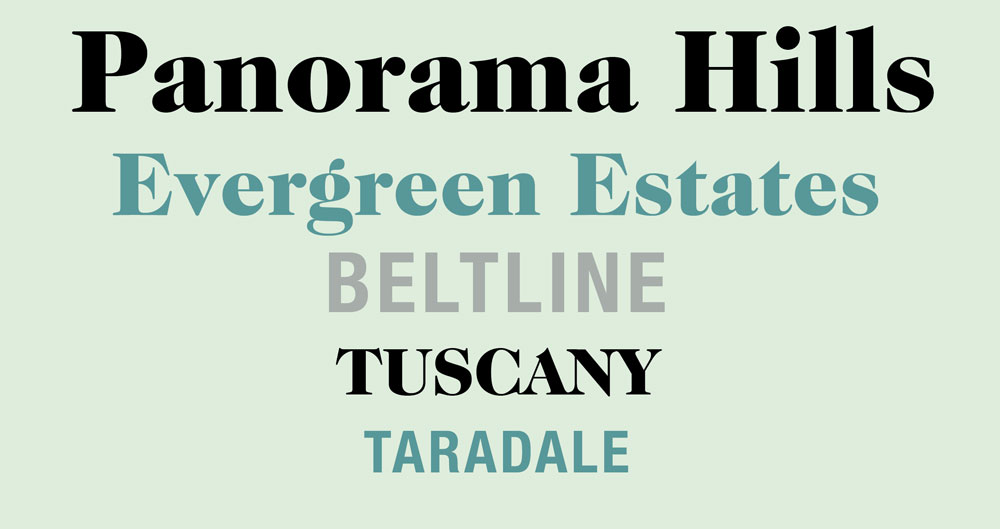 The 5 most walkable neighbourhoods in Calgary based on Walk Score

Source: Rankings determined by Walk Score, a private company that measures walkability by calculating the distance to amenities.

It’s probably no surprise that the most walkable neighbourhoods in Calgary are all inner city ‘hoods.

The 5 least walkable neighbourhoods in Calgary based on Walk Score

Source: Rankings determined by Walk Score, a private company that measures walkability by calculating the distance to amenities.

These neighbourhoods are all on the outskirts of the city.

Calgary is a city with nearly 800 kilometres of pathways and plenty of green spaces and parks — one of which is more three times as big as Stanley Park in Vancouver. (That’s Fish Creek Provincial Park.)

The 5 best neighbourhoods for access to parks and pathways

Live in Scenic Acres and you’re within walking distance of Baker Park, Bowmont Park, Bowness Park and the river pathway system — ride your bike and you’ll reach Edworthy Park and Shouldice Park in no time at all.

5 Calgary parks you should check out

Park highlights: This is a destination park for trail runners and mountain bikers. You’ll also get great views of WinSport from the top of the cliff face, and if you know where to find it, you’ll get a waterfall view, too.

Park highlights: Spend a day at this park walking the pathways, enjoying a picnic and renting a boat from the Boat House, operated by the University of Calgary Outdoor Centre. You’ll also find Seasons of Bowness, the park’s new teahouse.

Park highlights: After walking, hiking, biking or bird watching in this park, take a dip at the Sikome Aquatic Facility, enjoy a snack from Annie’s Cafe or have dinner at the Bow Valley Ranche Restaurant.

Park highlights: Stick to the paved pathways or explore the trails in the Weaselhead. You’ll get some great views of the Glenmore Reservoir, and if it’s a clear day, you’ll be able to see the Rocky Mountains too.

Park highlights: There are plenty of designated off-leash areas, single-track trails for the trail running or mountain biking enthusiasts, and paved pathways. You’ll also find a sacred aboriginal landmark in the southeast corner of the park.

Where to walk in Calgary

Exploring Calgary doesn’t have to mean sticking to the parks. (And it certainly doesn’t need to be done from inside your car.) We spoke with Lori Beattie, the author of Calgary’s Best Walks, the owner and guide of Fit Frog Adventures and the host of CTV Mornings Walking Wednesdays, to learn a little more about her favourite walks in the city. Her advice: “Don’t think about your ‘hood as not walkable. Just get out there, connect with your city and approach it like you would travelling in a new city.”

Here are just six walks she loves. (The maps below are made to represent the walks in Beattie’s book as accurately as possible. For details of the exact walks Beattie suggests, see Calgary’s Best Walks.)

According to Beattie, a great destination walk is one that has a lot of variety — variety in the topography you’re walking and variety in the architecture you’re passing by. When you’re purposely heading somewhere for a walk, it won’t be a place that’s uniform, but rather one that has a few surprises.

You have to stop here:
Stop and admire the view of the city and of the natural areas surrounding the Elbow River from the viewpoint at River Park.

Just one reason why Beattie loves this walk:
“This walk is a great combination of natural and urban spaces. You’ll walk through trails and up a hidden staircase, but can also make a stop at Britannia Plaza to shop at Owl’s Nest Books.”

You have to stop here: Take a rest at McHugh Bluff and take in the views.

Grab a snack here:
Grab a coffee or a snack at Vendome Café. Or take a longer break and have lunch. (Beattie’s must-have dish from Vendome when she’s on this walk is the duck Panini.)

Just one reason why Beattie loves this walk:
“You walk through some green spaces and off-leash areas and you see some quirky art and houses. With the nature, the shopping, the coffee shops and restaurants, there’s just so much variety.”

Keep in mind that the Zoo Bridge is under construction, so you will probably need to stray from Beattie’s exact walk.

You have to stop here:
St. Patrick’s Island. Spend some time exploring the new park, whether that means having a picnic on The Rise or taking the kids to the playground.

Grab a snack here:
You’re spoiled for choice if you stop into the Simmons Building. You can get a baked treat from Sidewalk Citizen, a coffee from Phil & Sebastian or have lunch at Charbar.

Just one reason why Beattie loves this walk:
“There are lots of people along this route so there’s a really good energy.”

Just because a neighbourhood doesn’t rank highly in terms of walkability doesn’t mean there’s nowhere to walk to — you’ll still find some gems by foot even if you can’t walk to get your groceries or walk to the movie theatre. According to Beattie, the edge of a neighbourhood can have some phenomenal finds if you know where to look (and where to walk to).

You have to stop here: On a clear day, you’ll get fantastic views of the Rockies from the escarpment. And in the spring and summer, you can see pelicans on the Bow River.

Grab a snack here:
Continue onto the Bow Valley Ranche route and you’ll reach Annie’s Café, a cute spot for a coffee, a sandwich or an ice cream cone.

Just one reason why Beattie loves this walk:
“This is a long but simple walk. It’s a great walk for getting into nature and just relaxing with your own thoughts.”

Start this walk in the parking lot just off of Tuscany Boulevard. You’ll begin on high ground before descending to the shaded coulee trail. There are many trails out of the coulee so the length of this nature walk can be adjusted. For a detailed map of this route, see Calgary’s Best Walks.

Estimated walking time: 1 hour but this walk can easily be extended

You have to stop here:
Take some time to graze on Saskatoon berries and let the kids creek hop.

Just one reason why Beattie loves this walk:
“I think this walk is a surprise. Many wouldn’t think you’d find a nature walk between Stoney Trail and Tuscany.”

You have to stop here:
Spend some time admiring the Reader Rock Garden.

Grab a snack here:
Café Rosso in Ramsay is the halfway point of this walk. Stop here to refuel.

Just one reason why Beattie loves this walk:
“I think people are often surprised by how easy it is to walk between all these neighbourhoods, as we often think of Macleod Trail as dividing them.”

To find out about more of Lori Beattie’s favourite walks in the city, read Calgary’s Best Walks. Learn about all things walking by following Lori on facebook/calgarysbestwalks or learn about her guided urban walks and mountain hikes and custom treks at fitfrog.ca.

Here’s a quick look at what crime looked like in Calgary neighbourhoods in 2015. 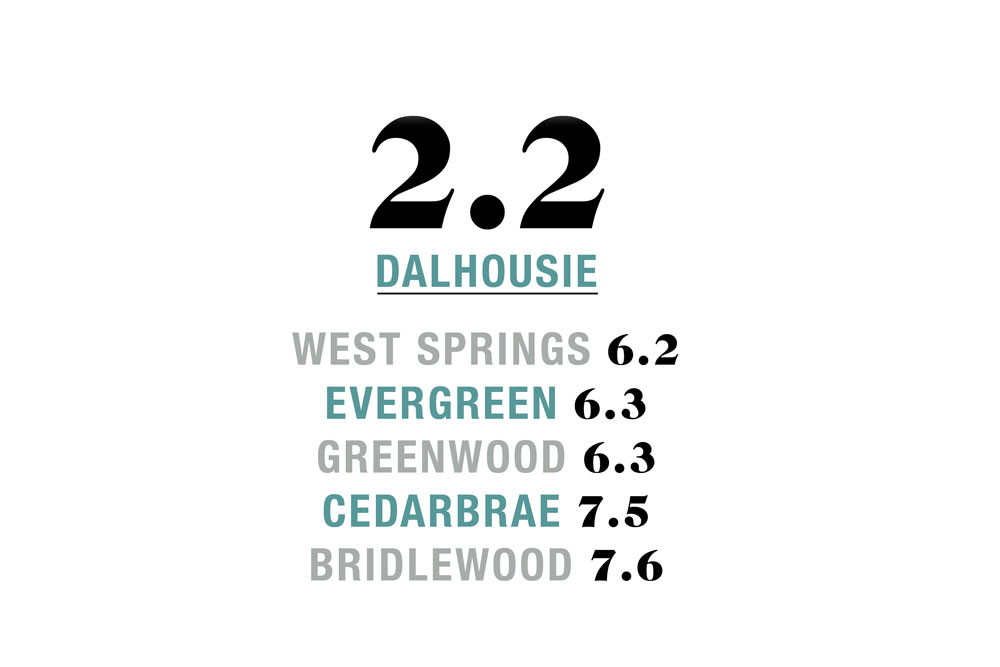 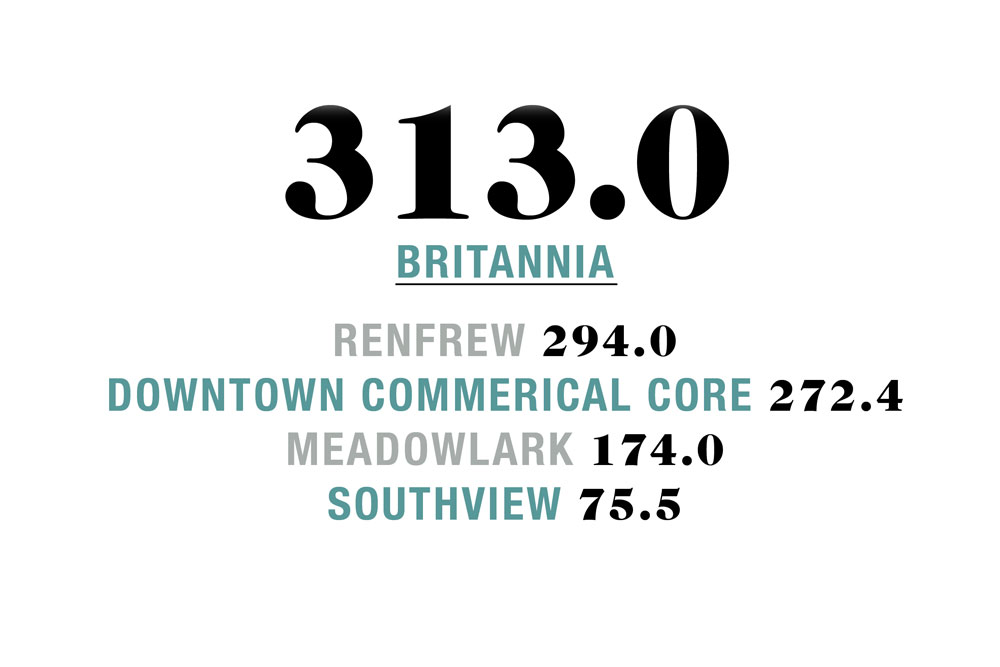 The neighbourhood with the highest number of actual crimes in 2015 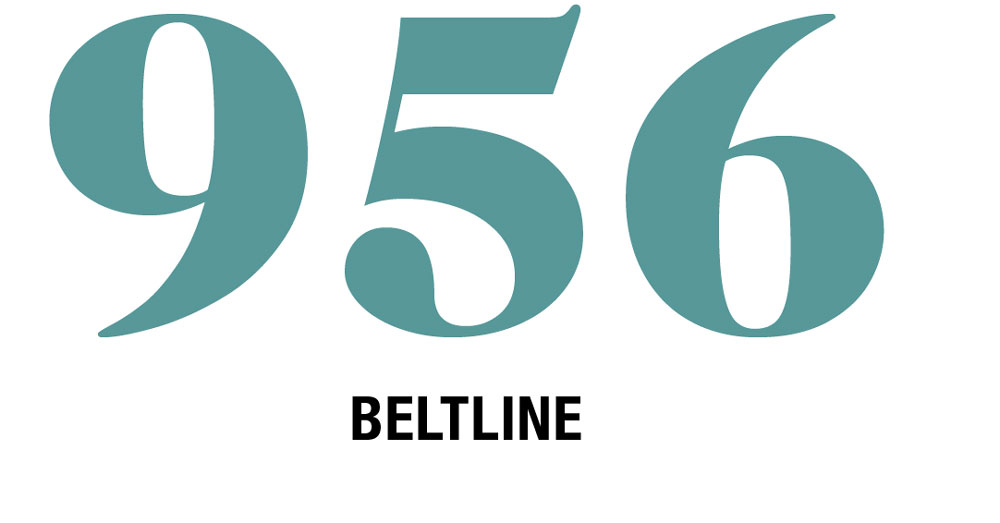 (Crimes counted include non-domestic assault, commercial robbery, street robbery, non-domestic violence, residential break and enter, commercial break and enter, theft of vehicle, theft from vehicle, social disorder and physical disorder.) When it comes to the number of actual crimes committed, the Beltline is way out front. The neighbourhood with the second highest number of total crimes committed in 2015 was the Downtown Commercial Core with 623, then Dover with 448.

The neighbourhood with the lowest number of actual crimes in 2015 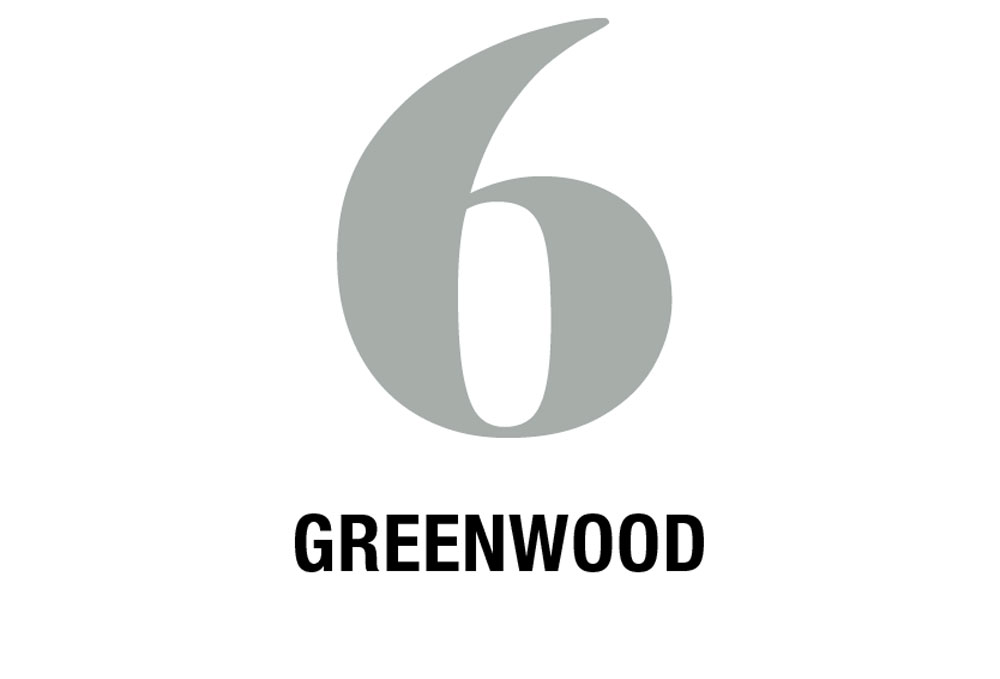 (Crimes counted include non-domestic assault, commercial robbery, street robbery, non-domestic violence, residential break and enter, commercial break and enter, theft of vehicle, theft from vehicle, social disorder and physical disorder.) Compare Greenwood and the Beltline. Greenwood had less than 1 per cent of the total number of crimes committed in 2015 in the Beltline.

Which neighbourhoods had the most residential break and enters in 2015

Which neighbourhoods had the most street robberies in 2015 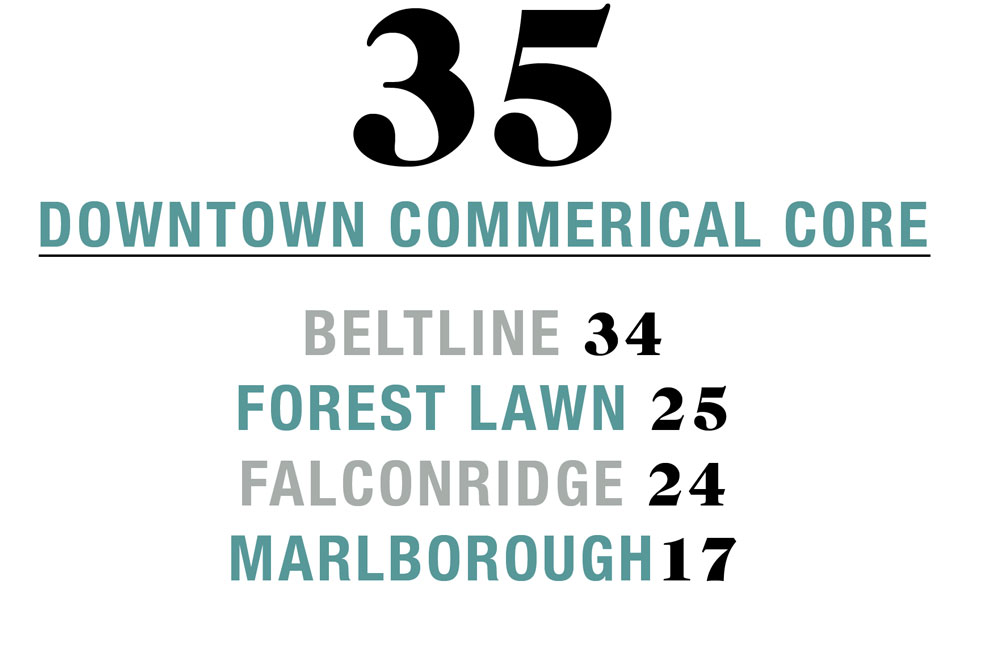 Which neighbourhoods had the most violent crime (non-domestic) in 2015

In 2015, the mean average of violent crimes (non-domestic) across all neighbourhoods was 4.