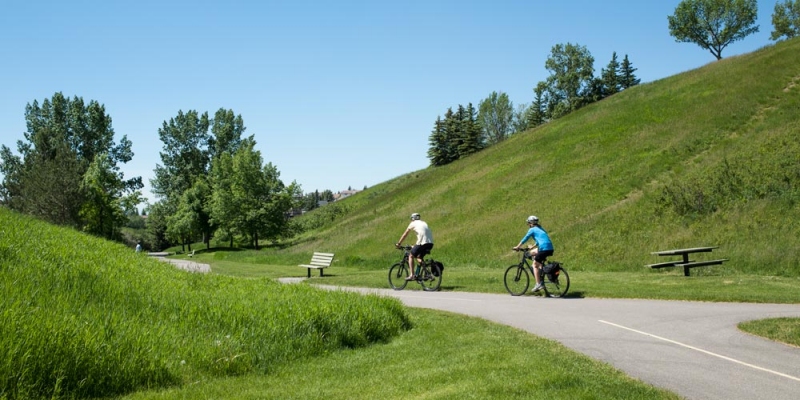 Edgemont ranked number one for parks and pathways in Calgary. Photograph by Jared Sych.

Avenue‘s survey isn’t the only one out there showing the importance of parks and pathways to Calgary residents. The City of Calgary’s 2016 Citizen Satisfaction Survey showed that 77 per cent of Calgarians think parks are a “very important” service, with 21 per cent saying that parks were at least “somewhat important.” The City is putting resources into parks and pathways and the Citizen Satisfaction report also seems to reflect that – just over 50 per cent of respondents said they were “very satisfied” with parks and pathways, with a further 41 per cent describing themselves as “somewhat satisfied.” (The remaining five per cent includes those who answered that they are “unsatisfied” with City parks as well as those who didn’t answer at all.)

Between 2012 and 2014 the City spent $4 million on redeveloping about 40 parks in more than 20 communities and there are many ongoing parks redevelopments, including the recently re-opened Prairie Winds Park, West Eau Claire Park, Century Gardens and others.

Michelle Wong, capital lead, Parks Calgary, says that the city has targets for green space. “New communities have 10 per cent of the land allocated to green space and developers have to dedicate that land,” she says, “but older communities don’t and it can be a challenge to get to that goal.” Instead, Wong says, the City focuses on improving the quality of existing parks and open spaces in inner-city communities.

The City is also focused on redeveloping existing park spaces to meet the needs of today’s Calgarians. “The approach we take now is much more multipurpose. These parks have to work harder and do more,” Wong says. “As the city grows and the population increases, your personal space starts to get smaller. You might go from having an acre, to a small yard, to a balcony, so public spaces are more and more important. Having that connection to open spaces is important to everyone.”

The Beltline neighbourhood has been identified by the City as having the lowest per-capita availability of open space, and the opportunities to add more space are few and far between. However, even in that community, the City recently managed to add park space – the Thomson Family Park – on the former site of the Calgary Lawn Bowling Club, which was moved to a new location.

Realtor Tanya Eklund, managing partner of the Tanya Eklund Group, Re/Max, notes that even the inner-city Calgary neighbourhoods have good access to parks, though, for her clients in the Beltline and other southwest inner-city neighbourhoods, proximity to downtown and good schools tend to be more important than parks and pathways. “I can’t remember anyone mentioning parks or pathways,” Eklund says, but she also cautions against drawing too many conclusions from that. “By the time I meet with [clients], they already have their neighbourhoods picked out.”