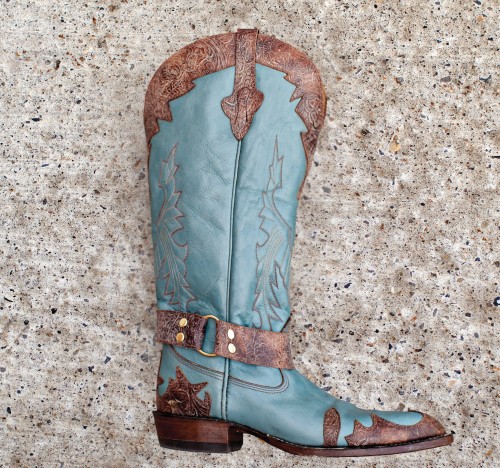 You break ’em in and they will take you pretty much anywhere you want to go. But, your boots can go where your horse can’t; whether you’re two-stepping around a dance floor, moseying around the Stampede Grounds, or strutting at a cocktail party, they’re the perfect balance between casual and western chic.

The Alberta Boot Co. has been making custom western boots for more than 30 years. Opened in 1978 by Clement Gerwing, the company has remained a family affair. Most recently, Clement’s grandson, Ben, assumed the role of general manager, taking over from his father, Tim.

From Olympians and Stampede princesses to movie stars and visiting British royalty, the family-owned and operated business has outfitted them all.

A pair of custom western boots starts at $350 and is handmade in Calgary by people who wear the boots they craft, a selling point if ever there was one.

Join us as we follow the journey from start to finish of what it takes to make a pair of custom-made Alberta Boot Co. cowboy boots. 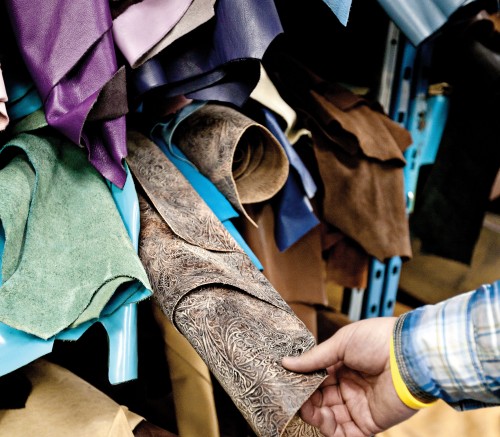 The boots being made in this photo essay use both a vat-dyed blue cowhide and brown embossed leather. 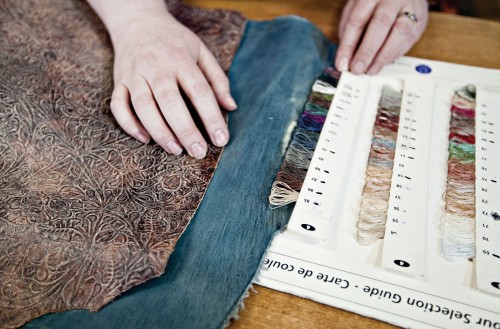 Stitching adds contrast to the boot, with a variety of patterns and thread colours to choose from.

With the leather, thread colour and pattern chosen, other specifics of a custom order include the choice of toe style, type of heel, height of the boot and any extras like buckles and pull-tabs.

Measurements are taken to guarantee the boots are uniquely fit to the customer. 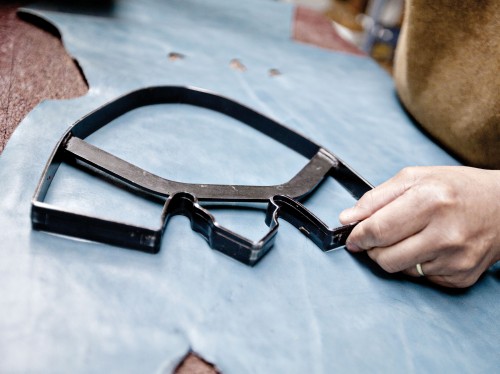 Metal templates called “dies” are used to cut pieces of leather that are sewn together to make the boot. Most of the dies date from when the Alberta Boot Co. first opened in 1978 and come in a variety of sizes, shapes and styles.

Once cut, the pieces of brown embossed leather are stitched on the collar, pull-tab, toe and heel cap of the boots. 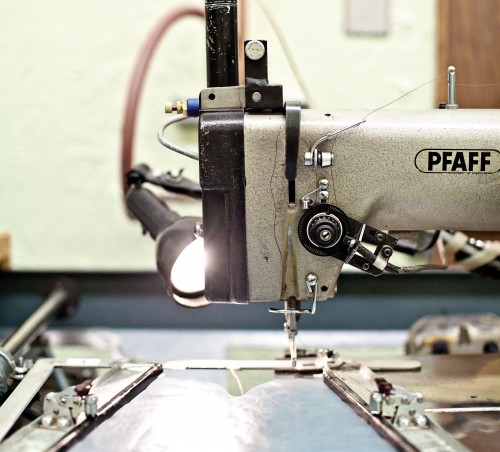 An automatic sewing machine stitches a pattern input from a cassette tape programmed with the options. Stitch patterns are named after Alberta towns and cities and include “Calgary” and “Balzac.” 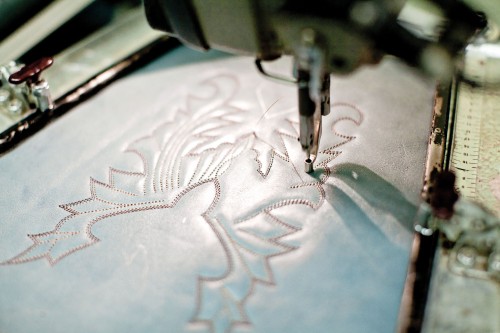 This boot is getting the “Edmonton” stitch, which is the same pattern used on the custom Alberta Boot Co. boots presented to Kate, the Duchess of Cambridge, last summer during her royal visit to Canada with Prince William. 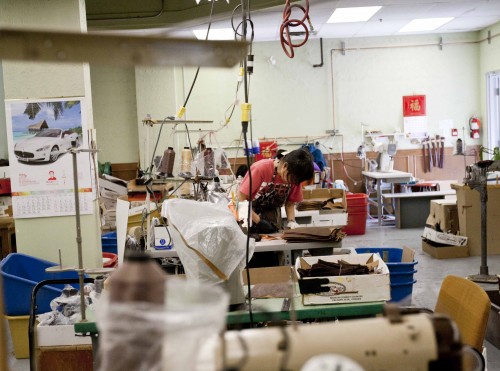 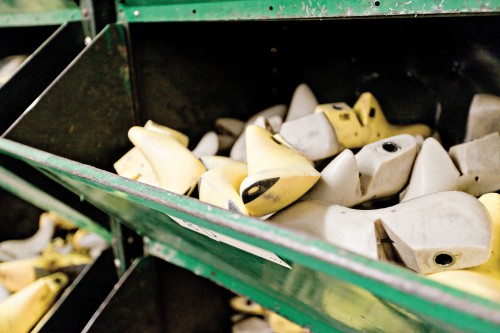 Seamstress Nuoi Huynh sews the lining and the outer part of the boot together on an industrial sewing machine.

On average, each seamstress works on 20 to 30 pairs of boots a day. Once sewn, the seams are softened and flattened to prevent any chafing.

This boot is made with soft cow leather, but exotic leathers such as stingray are so tough, they can sometimes break the needles on the sewing machines. 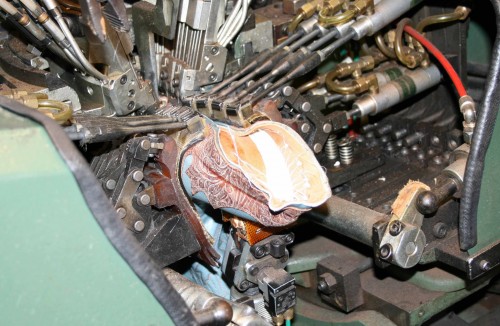 The “last” is a plastic mould that the sole and heel are built around in order to maintain the shape, size and width of the boot.

During the lasting process, metal fingers on the lasting machine grab the leather and pull it tightly down over the last mould. The heel and toe are done separately.

The leather is held in place with glue and staples, temporarily. Once the sole and heel are stitched and nailed in place, the last is removed. 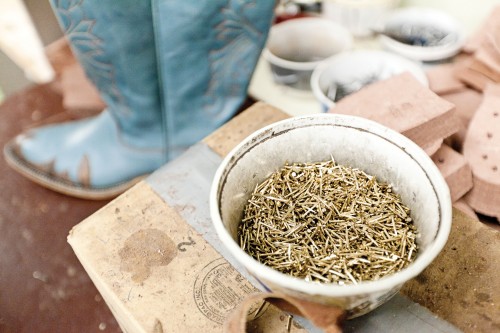 The leather sole is stitched with a nylon thread and an additional 33 nails are used to secure the heel and sole in place.

The rubber heel or top lift is nailed into the heel base – a dense, compressed leather base – by boot maker Mario Iannace. 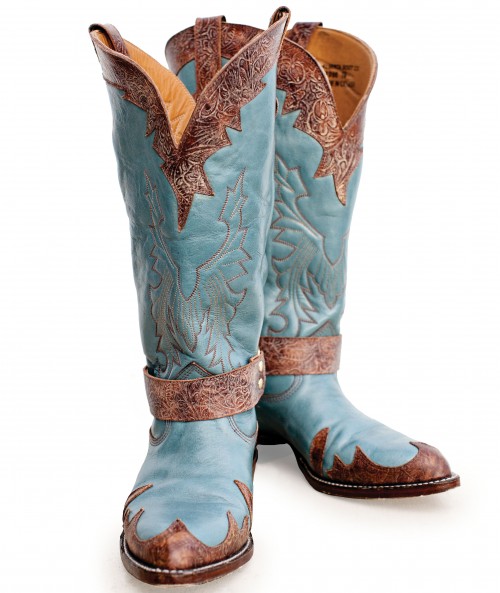 A final sander removes any hard or rough edges on the sole. A strip of soft leather is put inside the boot to cover the nails and the heel is painted for a final polished look before these one-of-a-kind boots are Stampede-ready.