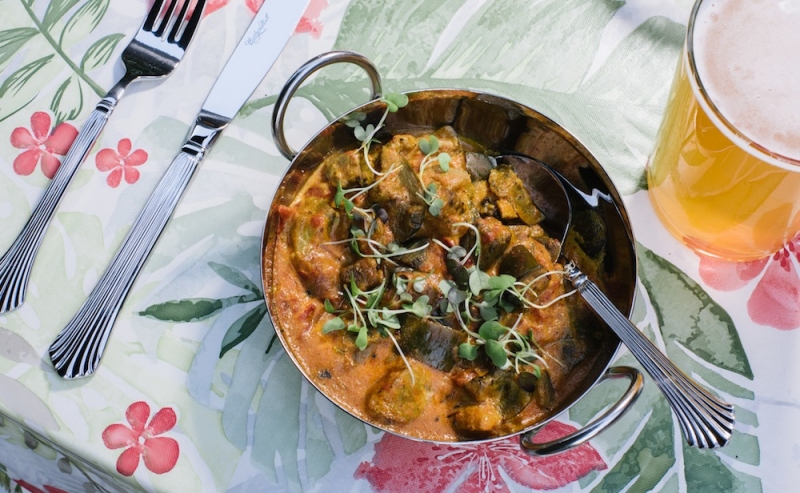 This month, beat the heat on a new restaurant patio or grab a drink at one of the new cafes or coffee bars in the city. Here’s what you need to know about the latest food-related openings, news and events in Calgary.

Thanks for an incredible opening night, #yyc. Let’s do it again tomorrow, shall we? ?❤️

Bar C’s former space on 17 Ave. S.W. has been transformed into a new Indian restaurant called Calcutta Cricket Club. A sister restaurant to Native Tongues Taqueria, CCC offers a small but flavourful menu of Bengali cuisine that includes dishes like keema chop (Bengali croquets filled with potatoes and ground lamb), paneer and honey, kati rolls, kabobs, chicken tikka and a few curries. Local artist Maya Gohill took on CCC as her first restaurant design project, transforming the neutral space into one with green and pink walls, a black and white checkered floor and a leopard carousel animal above the bar. There’s even two patios: a 10-seat front patio that overlooks 17th Avenue S.W. and a more secluded 50-seat patio along the east side of the restaurant, which features floral table cloths, colourful blankets on the bench seating and lots of plants.​

European Deli and Produce Market is now open for all your grocery needs. This huge family owned market opened its doors in southeast Calgary in May, and is sure to be your new go-to spot for European food products such as perogies, dumplings, deli meats, candy and a large selection of fruits and vegetables that fills almost half the market space. If you happen to be there at lunchtime, try to pick up one of its deli sandwiches.

Get to know Calgary’s history better while eating a delicious meal during Selkirke Grille’s Field to Fork Series at Heritage Park. The series starts off with a garden dinner party at the park’s Prince House on July 27, which includes croquet, tours of the house and a dinner with wine pairings. On August 31, the “Dining Through History: A Progressive Dinner” event features a four-course meal with drink pairings, with each course taking place in a different place at the park. And finally, on September 14, there is a garden tour and dinner made with food from the park’s gardens. Visit heritagepark.ca for more information on the events in this series.

There’s a new spot to quench your thirst on 17 Avenue S.W. Taiwan-based Presotea is a chain of cafes that specializes in tea drinks. The chain currently has more than 30 locations across Canada, but this is the first one in Alberta. What makes Presotea different is that it brews its tea in an espresso machine (using tea leaves instead of ground coffee). Some of the most popular tea and juice drinks include Sky (blueberry tea, aloe vera and basil seeds), Summer Fruit Tea (fruit tea, coconut jelly and basil seeds) and the Passionfruit Kick (passionfruit juice, lime juice, aloe vera and basil seeds). In addition to several teas and fruit juices, you can order tea lattes, milk tea and coffee drinks like americanos, cappucinos, nitrogen coffee and more. You can also add toppings like pearls, coconut jelly, red bean or basil seeds for 50 cents, then choose how much sugar you want and as well as your preferred drink temperature.

The Nash & Off Cut Bar has a new chef de cuisine

Chef Paul McGreevy has joined The Nash & Off Cut Bar as its new chef de cuisine. Prior to joining the Inglewood restaurant, McGreevy worked most recentlly as the corporate chef of CRAFT Beer Market and the executive chef of Starbelly Open Kitchen + Lounge.

In mid-May, downtown restaurant Workshop Kitchen + Culture opened its own coffee bar within the restaurant called Crafted Coffee. The restaurant is located inside of the Grand Theatre, so to find Crafted Coffee, just head past the box office and towards the restaurant bar. Crafted Coffee offers a selection of Phil & Sebastian coffee drinks like espresso, drip coffee, americanos, lattes and more, as well as baked goods from Corbeaux Bakery. It’s open for grab-and-go between 7 a.m. and 3 p.m., and will be used during lunch and dinner service for those dining in the restaurant.