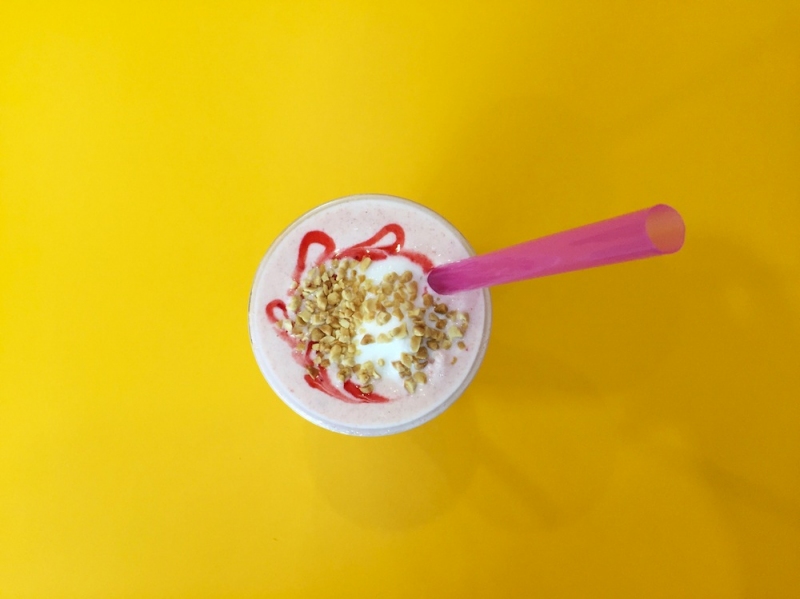 The peanut butter and jam milkshake from Boogie's Burgers. Photograph by Alana Willerton.

New and older Calgary restaurants alike are bringing their A-game this month, with offerings that range from poke nachos to $5 glasses of bubbly. Plus, there’s a slew of foodie festivals and events to visit. Here’s what you need to know about the latest food-related openings, news and events in Calgary.

​It’s been five years since AVEC Bistro opened in the Beltline, and the French restaurant wants to celebrate with its diners. During the month of August, anyone who comes to eat dinner at the 66-seat restaurant gets $5 glasses of bubbly to go with their meal. It’s the perfect pairing to go with executive chef Daniel Pizarro’s delicious dishes like bison tartare, duck confit, B.C. halibut and more.

A beloved staple of Calgary’s dining scene since 1969, Boogie’s Burgers has expanded with a second location in Marda Loop. The retro burger shop opened its new eatery on June 29th, and like its Renfrew location, this new one is bursting with personality and zany colours. Expect bright orange walls, blue vinyl booth seating, a pink countertop and tables the colour of Cheez Whiz. The walls are decorated with burger-inspired artwork and there are several arcade games that guests can play. But of course, the main attraction is the food. There are burgers named after current and former employees, fun sides like tator tots and mini corn dogs, and more than 30 milkshake flavours that range from creamsicle to the “Fat Elvis,” which is made with peanut butter, banana and bacon.

If you’ve been meaning to try out a new restaurant this summer, do it during Summer Feast. From August 11 to 20, local restaurants around the city will be offering three-course, prix fixe lunches or dinners for only $15 to $35 each during this new dining event. There are 13 Calgary restaurants participating in the event, including The Nash, Rouge Restaurant, Foreign Concept, The Guild, Pigeonhole and more. Depending which spot you choose, you could find yourself dining on dishes like Alberta Trout, charred cabbage or pavlova.

Borrowing this fantastic picture of our Angry Hawaiian #nachos from @4thecmngd earlier today on the patio! Thanks for stopping by!

After more than a year of anticipation, craft nacho and salad restaurant Madison’s 12|12 has finally opened in Inglewood. The community-funded restaurant, which has soft launched with a smaller menu than it will have normally, takes a bar staple like nachos to the next level with offerings like poke nachos, Korean nachos, ham and pineapple nachos and more. You can even finish your meal off with some apple pie nachos for dessert. Grab a seat on the 49-seat, south-facing patio and prepare to dig in.

Taste of Calgary celebrates its 20th anniversary this month

Experience all the different kinds of cuisine Calgary has to offer at Taste of Calgary, which runs from August 10 to 13 at Eau Claire Market. The annual foodie festival, which is celebrating its 20th anniversary this year, has guests purchase $1 sampling tickets to try different foods and drinks from participating eateries. This year, guests can try pork, lotus root and jalapeno dumplings from The Dumpling Lab, tator tot poutine from Mango Mania, charsiu pork sesame donuts from Pure Contemporary Vietnamese Kitchen & Bar and more. There will also be a beer and spirits garden featuring drinks from Annex Ales, Banded Peak Brewery, Eau Claire Distillery and more.

The newly opened Tavernetta is located on the main level of a house in Renfrew. Inspired by Northern Italy, the neighbourhood tavern embraces a casual, comfortable vibe with its simple, rustic decor, ’90s hip-hop and R&B playing on the speakers and a kitchen team dressed in soccer jerseys. The 50-seat restaurant serves their take on Italian tavern food, which includes salumeria (sliced meats served on a board), a spiedini skewer program, homemade pasta, gluten- and pork-free meatballs and more. Tavernetta has a lovely 36-seat backyard patio filled with shady trees, seating spread out over a mix of brickwork and grassy areas, strings of lights and a wooden fence that makes the space feel private and cozy. The restaurant will eventually be adding two bocce ball lanes, tables and a small bar on the north side of the restaurant as well, so stay tuned for that.

Get to know Calgary’s cocktail scene better during the new Peeled cocktail festival, which runs from August 12 to 14. The event features seminars and workshops on subjects like how to make Old Fashioned cocktails and how to stock a home bar. They’ll be led by local and internationally renowned experts like Dale DeGroff, Jack McGarry, Jeff Savage and more. You can also purchase a Peeled Passport to get special featured cocktails at more than a dozen local bars for $9. Participating bars include One18 Empire, Proof, Raw Bar, The Derrick, Last Best, Bank & Baron Pub and more.

The Brewer’s Apprentice, a new growler fill and tasting room that opened in East Village in July, offers the largest selection of growler fills in the city. Growlers are jugs (usually made of glass) that can be filled with draft beer and taken home to be enjoyed on your own or with a group of friends. You can bring your own growler in or purchase a crowler at The Brewer’s Apprentice. The specialty liquor store has 48 Canadian beers on tap to choose from, many of which come from Alberta. The rotating selection currently includes brews like a grapefruit ale from Whistler Brewing Company, a Crisp Pils from the Jasper Brewing Company, the People Skills cream ale from Calgary’s Tool Shed Brewing Company and more. You can also get bottled craft beer and bottles of wine. While you can’t sit down for a drink here, The Brewer’s Apprentice does have a private tasting room where tasting events will be held.

If you’ve visited Whitehall recently, you may have noticed some changes to the food and wine menus. Not only has the Bridgeland restaurant added more Canadian wines to its wine list, but the food menu now has more shareable small and large plates, street food-inspired dishes and more dishes centered around vegetables. Organic radishes with anchovies, sharing boards and summer lettuces are just a few of the new dishes available.

[Correction: A previous version of this article stated that Avec Bistro would be offering free glasses of bubbly during the month of August. Avec’s birthday promotion is now $5 glasses of bubbly.]