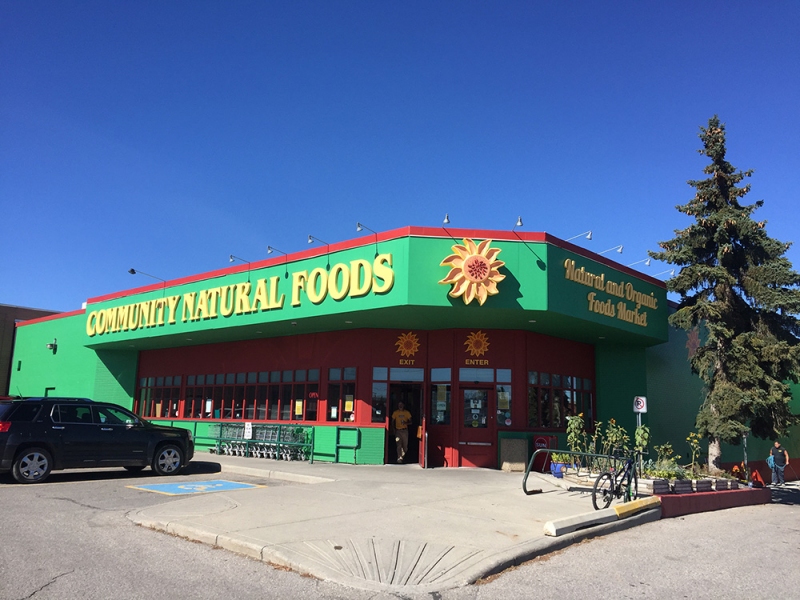 “Wellness for all.” In four decades since first opening its doors, Community Natural Foods has never shifted away from this stated purpose.

Originating at Midnapore Fair when Garry and Peter Wilkes sold dairy-free, no-added-sugar ice cream, the store has grown into a Calgary staple since then. The Wilkes brothers opened the first Community Natural Foods on 11 Ave. S.W. in 1977. At the time, there weren’t many options to buy natural food in Calgary. CNF filled that role, finding success in selling health foods to Calgarians ever since then. Now in 2017, CNF is celebrating its 40th anniversary.

Since its first day of business, CNF has expanded from what was primarily a bulk store, to three full-format grocery markets across Calgary and an online store. In 40 years, CNF has become known for its selection of health food and nutritious supplements, and its knowledgeable staff, ready to assist customers with whatever they’re looking for.

“It’s just an incredible story of what Calgary has gone through the last 40 years,” the new CNF General Manager of retail sales Adam Martin says. “When Community started, it was a slow bulk store that had a couple hundred co-op members. Now, we’re serving over 20,000 people every single week and have three stores, and we’ve really been able to grow the business as the city’s grown.”

The starkest difference CNF faces in Calgary compared to its opening in 1977 is how the health food retail landscape has shifted around them. What was once a niche market has become common in many grocery chains.

“Even 10 years ago, there were probably 20 or 25 stores in the city of Calgary that we would consider competitors,” Martin says. “They were all independent health food stores, and they were all part of that inner circle of stores, just like us. In the last 10 years alone, we’ve seen all of the mass stores really just take aim at our industry and our marketplace.”

Despite the increased competition, CNF is still a premier health food store in Calgary. For its 40th anniversary, the store introduced the free myCNF membership program, which gives its users a 10 per cent discount, drawing back to Community’s roots as a co-op store. CNF’s education series will grow throughout the summer to include more free how-to events presented by in-store experts. Finally, in August, the store will hold a one-day farmers’ market, bringing in farmers who have supplied the community with some of CNF’s most popular products.

Throughout its history, CNF’s popularity has been bolstered by a growing desire for nutritious whole foods to prepare at home. Martin says the biggest difference in the store’s history has been a growing interest in health food stores, and with that increased interest, CNF’s educated staff makes themselves well-equipped to assist new customers.

“Health food stores are very different from grocery stores in that we very intentionally have staff on the floor to answer questions,” Martin says. “When people come into a Community Natural Foods store, our expectation is that if they have a question, we’re going to have a staff member who will either have an answer or find the answer for them. That’s just not the experience that most people would be used to in a grocery store. And I think that’s been true since the ’70s.”

In four decades of serving up healthy whole foods to Calgarians, CNF has its share of longtime customer favourites on its shelves. Here are just a few popular products from long-standing suppliers.

Crafting products from a mix of traditional formulas and a foundation of clinical experience, Wild Rose supplies CNF with an array of body and beauty products. One particular favourite is their herbal d-tox. According to CNF, the product has been used in Canadian clinics, along with their own outlets, for more than 30 years to provide a multi-system detoxification of the colon and kidneys, keeping its users in good health.

Grown on a certified organic farm just north of Coachdale, Mans Organic’s tomatoes are a relatively newer favourite in CNF’s stores. The farm was founded in 1994, but went fully organic just seven years ago to produce safer and healthier food. In 2012, Mans Organic built a greenhouse to produce tomatoes, peppers and cucumbers, which are sold through organic stores in Calgary and Edmonton.

Poplar Bluff has operated out of rural Strathmore, Alberta for more than half of CNF’s existence, producing organic vegetables for a quarter of a century, now. With a soil and climate ideal for growing potatoes, Poplar Bluff has sold a variety of their organic taters through CNF for years, from luscious yellow mashers to waxy red-skinned tubers.

The Rae Dunphy line of essential oils is made up of organic and wildcrafted products sourced from small family producers. CNF offers many of these oils on their shelves, and the producer’s Frankincense essential oil is a particular bestselling favourite.

True to its name, Alberta Natural Products crafts soaps that are completely natural and handmade. A combination of plant-based oils goes into their distinct bars, making up a lineup of soap that includes lavender, grapefruit, orange cinnamon, oatmeal honey and almond, and more.

For nearly three decades, Highwood Crossing has used organic farming methods on its land, a family farm with a history dating back to the 19th century. For more than 15 years, one of Highwood’s highest selling products has been their muffin and pancake mix. Made with flax seed, and without additives, preservatives, or artificial colours and flavours, this mix is versatile enough to make pancakes, muffins or waffles.