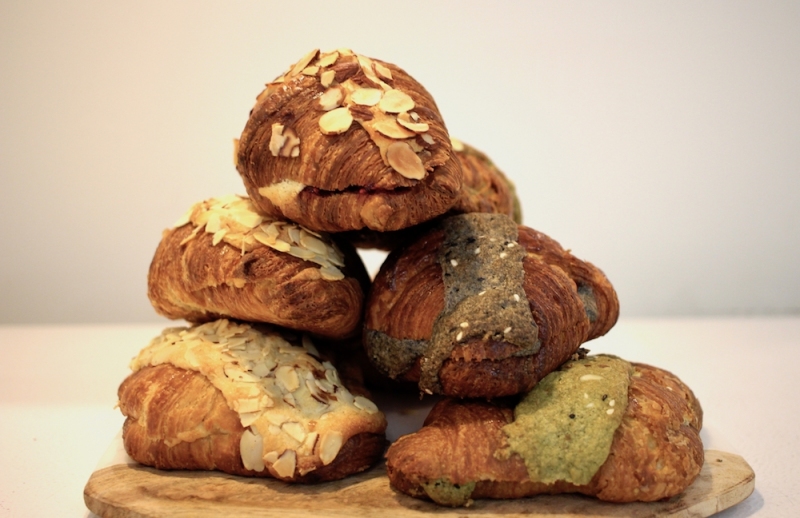 Try the croissants at the newly opened Butter Block. Photograph by Wendy Lee.

This month’s new restaurants, bakeries and coffee shops are bringing more delicious pastries, coffee, grilled meats and sushi to the Calgary dining scene. Here’s what you need to know about the latest food-related openings, news and events in Calgary.

One of Calgary’s newest bakeries is stepping up the city’s pastry game. Local baker Karen Kong recently opened Butter Block’s new bakery space in the Devenish Building on 17 Ave. S.W. But, while the bakery’s brick and mortar location may be new, Kong is no stranger to the world of pastries – she previously worked on the pastry teams at Teatro, EAT and Alforno in Calgary and has held Butter Block pop-ups before. Some of Butter Block’s most popular items are the 81-layer stuffed croissants in flavours like s’mores and Earl grey with milk crumbs. But you can’t really go wrong with anything on the menu, which also includes spicy cheese knots, sweet and savoury croissant sandwiches, bread pudding, cookies and more.

Need an excuse to go out for poutine? Calgary Poutine Week is back from April 20 to 28. Throughout the nine-day event, participating restaurants offer unique and classic takes on the popular dish. More than 70 restaurants are participating this year, including The Guild, Vendome Cafe, National, Starbelly, Diner Deluxe and Cleaver. Poutine Week is also an opportunity to contribute to a great cause through your stomach – each time a  participating restaurant sells its poutine dish, Mealshare matches that by giving someone in need a free meal.

The Muze Coffeehouse opens in Chinatown

It’s been in business for nearly a decade, but local restaurant chain OEB is still one of the city’s most popular breakfast spots – its three locations still often see two-hour wait lists on weekends. So you’ll want to make note of a recent change to one of its locations: OEB has closed its original restaurant along Edmonton Trail N.E. and re-opened in a new Bridgeland location on April 7. Put yourself in line using the NoWait app to check out OEB’s cool new digs in the space formerly occupied by Bridges on First.

Open since March 19, Omo Teppan & Kitchen is a 6,000-square-foot, 160-seat restaurant that offers Japanese teppanyaki. If you’re sitting at one of the six teppanyaki tables, you get to watch as items like shrimp and teriyaki beef, chicken or salmon from the teppanyaki menu are cooked right in front of you on an iron griddle. New York steaks, rib eye steaks and filet mignon are all available at Omo, but if you want to really treat yourself, you can order wagyu or kobe steak. Not only is this the only Alberta restaurant with kobe beef, but you have to call 24 hours in advance to order one of the kobe steaks. If you’re seated at a non-teppanyaki table, you can order off the kitchen menu, which features noodle dishes, tempura, sushi, rolls, oysters and more.