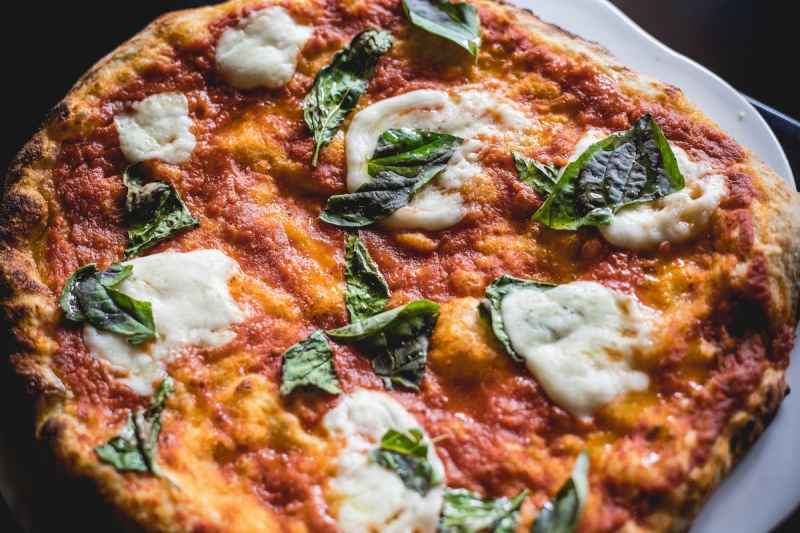 The margherita pizza at the newly opened Buffo. Photograph courtesy of Buffo.

Calgary’s good weather is finally here to stay, making it the perfect time to check out one of the several new restaurants, bars and cafes that have opened recently. Here’s what you need to know about the latest food-related openings, news and events in Calgary.

It’s been almost two years since Toronto-based restaurant group Oliver & Bonacini opened its first Calgary restaurant, The Guild. The group soon added subterranean bar Sub Rosa and event space Hudson to its repertoire as well, and now, it has another full service restaurant here with the opening of Buffo on May 15. The new Italian restaurant is located inside the Saks Fifth Avenue store at CF Chinook Centre, though you can access the restaurant from within the store or from the outside parking lot. There’s an eye catching bar at the front entrance, while the stylish dining room has checkered floors and rich blue walls. The five best seats in the house overlook the chefs and the pizza oven in the kitchen. Try to snag a seat there to see chef Michel Nop and his team at work. Buffo offers classic Italian fare at reasonable prices, serving up arancini, beef meatballs, beef carpaccio and four kinds of bruschetta. There are seven kinds of pizza ranging from a classic margherita to The Buffo, which comes with a big dollop of warm burrata cheese that you spread all over the pizza yourself. The pasta dishes, which include linguine carbonara and spaghetti pomodoro, have fresh, house made noodles, and there are meaty and seafood entrees like the chicken parmesan, branzino or grilled flank steak. If you are planning to check out Buffo, try to do so during its happy hour – from Monday to Friday, you can get $4 wine, Trolley 5 beer and bellinis from 2 p.m. to 6 p.m.

Earlier this year, Cilantro celebrated its 30th anniversary with some renovations and updates to its menu. If that weren’t enough of a reason to pay it a visit, the restaurant now has a new happy hour deal as well. From Tuesday to Friday, you can get $5 glasses of Prosecco and discounted 9 ounce glasses of wine when you visit between 2 p.m. and 6 p.m. This will give you the chance to check out the restaurant’s updated look and try out the more casual, Canadian focused menu.

This newly opened bar brings an interesting (and wallet-friendly) approach to the busy 17 Avenue S.W. dining strip. Located in Roosevelt’s former space, Hostel offers almost all the food on its menu for $10 and almost all the drinks on its menu for $5. Their motto? “Every day is special.” So what kind of food can you get for $10? Think waffle nachos, corn dogs, fried mashed potato balls, wings, grilled cheese sandwiches and four kinds of tacos. There are even burgers named after notable political figures – they’re called The Klein, The Trudeau, The Notley and The Nenshi. As for the drinks, there are 13 beers on tap along with a selection of wine, cocktails and shots. Hostel has also inherited a north-facing patio that is perfect for people watching.

Local Altadore eatery NHBR is hosting a series of street food pop-ups this summer. Called NHBR Nights, the series is a chance to come out for an appetizer, a main course and a drink from a featured local restaurant. The upcoming pop-ups feature Native Tongues Taqueria on May 30, Two Penny Chinese on June 27, Shiki Menya on July 25, Home & Away on August 29 and Calcutta Cricket Club on September 26. The pop-ups run from 6 p.m. to 10 p.m. and it costs $16 to take part.

Tuk Tuk Thai’s rapid expansion continues with the opening of its fourth location in Kensington on May 14. The local Thai chain opened new eateries in Signal Hill and Creekside earlier this year and is still planning to open three more. Swing by the new Kensington location to get your fill of pad Thai, red curry, tamarind chicken and more.

Vibes Coffee Bar opened its doors in Evanston over the last weekend of March. The coffee shop serves several popular local food and drink products, including Rosso coffee, bagels from Bagelino’s, baked goods from Cupcake Stories and ready-to-eat meals from Made Foods.