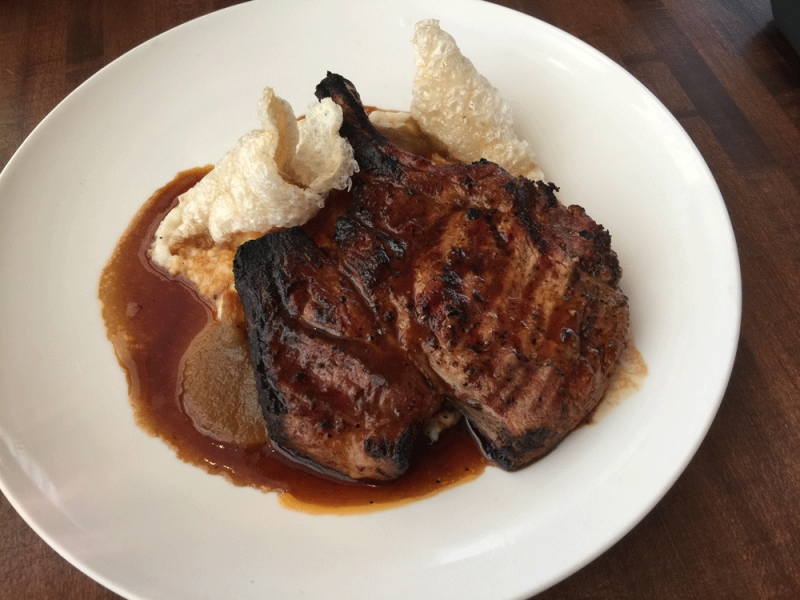 Oh, the humble pork chop. If you grew up in the ’70s, there’s a good chance pork chops graced your family’s weeknight dinner table on the regular, thin as they were and smothered with either ketchup or Campbell’s mushroom soup and cooked within an inch of their life.

In a misguided attempt to elevate the pork chop, there was that sorry-ass marketing campaign in the ’80s heralding pork as “the other white meat” – a slogan about as inspiring as the Flames announcing the acquisition of a fourth-line defenseman with a bad back.

Plus it was stupid. Pork should be served pink. There hasn’t been a case of trichinosis from commercial pork in decades. (Though apparently you can get it from undercooked walrus.)

So it’s nice to see that at Starbelly Open Kitchen + Lounge, the pork chop is finally getting its due.

The dish, created by sous chef Kevin Johnson as a tribute to his mother’s pork chop and applesauce dish, begins with a thick-cut chop from Broek Pork Acres family farm near Lethbridge. It is brined for 24 hours in a simple mixture of salt, sugar and water, which helps keep it moist and tender. It is then marinated for another 24 hours with roasted red pepper, jalapenos, apple cider vinegar and pepper, adding another layer of flavour and kick while further tenderizing it.

Finally, the chop is grilled to a perfect pinkness and served with a tangy smoked jalapeno applesauce, which contrasts nicely with the creaminess of the white cheddar grits and a gravy of remarkable depth. Topped with house-made chicharrones (deep fried pork fat) for crunch, this well-executed dish is a study how to build flavour and texture in ways that contrast and complement each other.

So, if you have fond memories of pork chops, do yourself a favour and head south to Starbelly. Chef Johnson may not prepare them with a mother’s love, but when it comes to commitment to flavour and proper cooking technique, he’s probably got her beat.