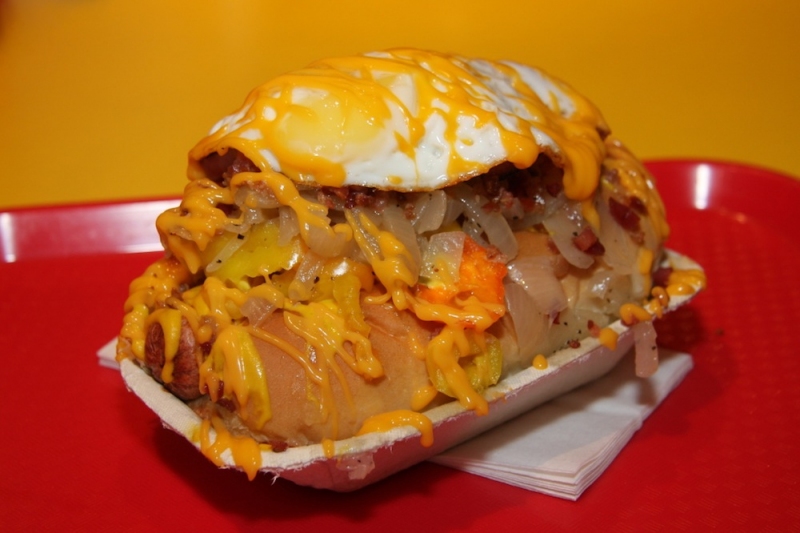 The Sherm's Ultimate Gripper hot dog at Tubby Dog is named after a friend of the owner. Photograph courtesy of Tubby Dog.

What’s in a name? A whole lot, if the menus at Calgary restaurants are anything to go by. Open the menu at several local eateries and you’ll find dishes or drinks named after notable people in the owners’ lives. Whether they’re family members, old friends or employees, these people were the inspiration for some of the most well-loved dishes at these restaurants.

While some restaurants only have a few dishes named after someone, others have named most of the items on their menu after other people. We spoke to Calgary restaurant owners to find out more about the people that inspired some of their dishes and why they were named after them.

The story behind the name: “[Doug] was a guy that was working for us. He’s a big fella and he wanted us to name a burger after him, so we made this gigantic kind of monstrosity for him and we told him if he finished it, it would go on the menu. And he got through it, choked ‘er down, and so it went on the menu. And actually, we sell quite a few of those now.” –Noel Sweetland, co-owner of Boogie’s Burgers

On why they put “Don’t Fear the Reaper” in the name: “It’s not a very healthy burger, let’s be honest. It’s pretty big. So it was kind of you can’t fear death if you eat these all the time because you’re probably not going to live too long.” –Noel Sweetland

The Wickens burger from Burger 320

The story behind the name: “Wickens is my mother’s maiden name. She grew up in Cayley, [a small town] in-between High River and Nanton. That’s where she was born and raised and we still have that farm in our family. And my grandfather, which is her father, he homestead there in 1905. So that Wickens burger is named that mostly because the recipe for the chutney that’s on that burger is my grandmother’s recipe.” –Karen Humphrey, spouse of Mario Spina, owner of Burger 320

The Benjamin nut milk from Juice Because

The story behind the name: “Not all of our juices are named after actual people we know. When we first developed our menu, I think we just started to go a little crazy after hours of juice tasting. The juices started to develop personalities. We knew that we wanted to give them a different naming system than most juice companies did. That’s how it started. As we started doing a lot of collaborations, some of our juices are named for specific people. Like our collaboration with Monogram Coffee – we had two of the owners go head-to-head, and whoever came up with the best cold brew blend, that’s who we would name it after. Benjamin Put won, so it’s called the Benjamin.” –Elisa Boyd, co-founder of Juice Because

The Johnny G and the Gio pizzas from PZA Parlour

The story behind the name: “We do pre-game lunches for the Calgary Flames. My dad is a big sports fanatic. He asked if he could name some pizzas after the guys and what kind of pizza they like. We would kind of design a pizza after them. The Gio has two purposes. It honours Giordano and my brother-in-law is also Aaron Giovanetto. That pizza kind of kills two birds with one stone.” -Tony Nicastro, owner of PZA Parlour and Villa Firenze

What’s on it: Sherm’s Ultimate Gripper features a hot dog that is wrapped in bacon and deep fried, then topped with homemade chili, ham, bacon, cheese, hot peppers, onions, a fried egg and mustard.

The story behind the name: “The Sherm’s Ultimate Gripper is named after a really good friend of mine who helped me build the restaurant. One of his nicknames is Sherm. He’s like a big Paul Bunyan kind of guy. He’s a carpenter, so I created the hot dog to match his personality. It was kind of like I built him a hot dog in his honour because he went above and beyond what should’ve been done around here.” -Jon Truch, owner of Tubby Dog

The Hutch pizza from Without Papers

What’s on it: The Hutch pizza is topped with calabrese salami, genoa salami, pepperonata, mozzarella and tomato sauce.

The story behind the name: “When we were doing the construction at Without Papers, there was a waitress that was working at Sugo. Her name was Roisin Hutchinson. She really liked spicy food. When we were doing the construction, she was like, “You guys better make sure you have a goddamn spicy pizza up there.” And so we designed the Hutch pizza with spicy pepperonata and we named it after her because she demanded that we have a spicy pizza.” -Jesse Johnson, co-owner of Without Papers