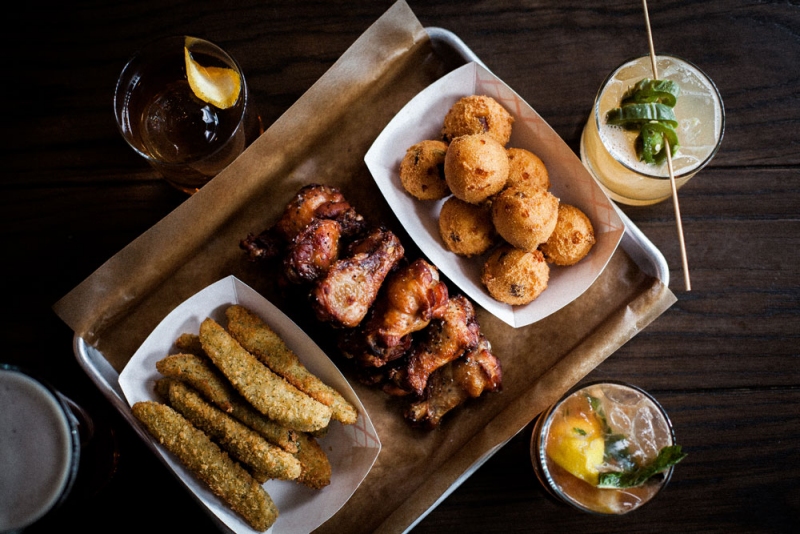 The smoked chicken wings are in the centre between the deep fried pickles and hush puppies. Photograph courtesy of Hayden Block Smoke & Whiskey

When you have a giant professional smoker in the back of your restaurant, you’re going to want to smoke everything. Brisket, ribs, turkey breast, pulled pork… they all get put into Hayden Block‘s big smoker to cook until they’re perfectly tender.

Smoked chicken wings aren’t unheard of, especially in Texas where the Hayden Block crew studied the art of barbecue, but they aren’t as common as other barbecued fare. Which is a shame, because if this dish at Hayden Block is any indication, smoking is the way to go when it comes to chicken wings.

From start to finish, it takes about 26 hours to make a batch of these wings. Ian Walsh, Hayden Block’s chef and general manager, starts with fresh chicken wings – the biggest size available – and brines them for 24 hours in a spicy solution made with well over a dozen ingredients (no, he isn’t willing to reveal the secret recipe). From there, the wings get rubbed with a blend of salt and pepper, brown sugar and paprika and then are smoked for two hours. Walsh says they’re delicious at this point, but he likes to dunk them in the deep fryer for just 30 seconds to give them some extra crispness.

And the sauce? These wings don’t need any sauce. The flavour comes from the brine, the rub and the apple and cherry wood used in the smoker.

The result is a plate of super juicy wings that don’t shrink down like typically over-fried pub wings do. Hayden Block charges $13 for an order of eight wings, which is more than enough to share around the table as an appetizer along with some other Texas-style starters like hush puppies and fried pickles.