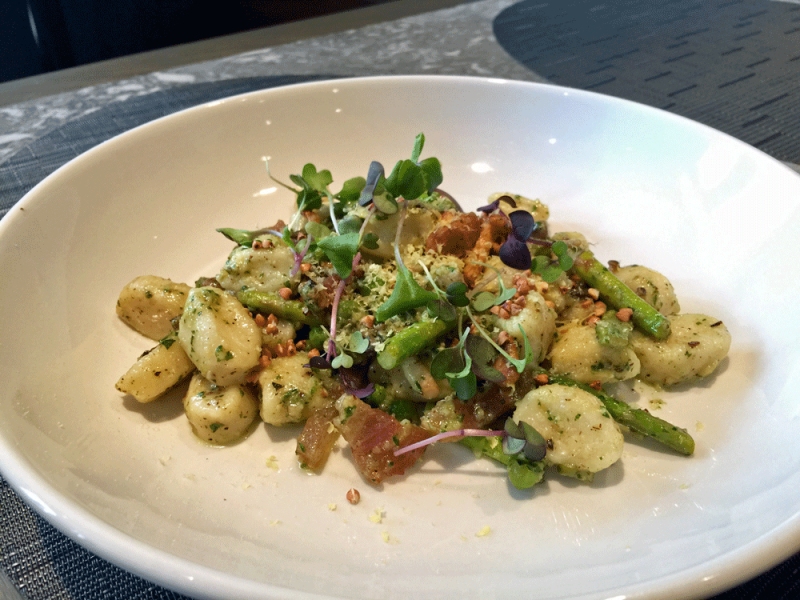 Gnocchi, which are little nubs of potato pasta, are something of a canary in a coalmine when it comes to measuring the skills of a chef. Done well, they are fluffy, chewy but not overly dense delights that can complement a myriad of sauces.

Done poorly? They’re leaden doughy masses that likely won’t kill you like the proverbial canary but are certainly a sign that the kitchen won’t be earning Michelin stars anytime soon.

So when I recently ate at Oxbow, the newly revamped restaurant in The Kensington Riverside Inn, it was with some trepidation that I ordered the gnocchi.

Based on the menu description, “pea and ricotta gnocchi with guanciale, asparagus, mushrooms, cured egg yolk and lemon walnut pesto,” it had all the makings of a delicious dish. But the ghosts of gloopy gnocchi past loom large in my memory.

One bite in and all my fears were allayed. Sean Cutler, chef de cuisine, incorporates ricotta cheese, parmesan and lemon zest into the dough for a delicate balance of flavours suited to the tender texture, which he achieves by mixing the dough by hand just until the ingredients are incorporated.

He says the inspiration behind the dish is the summer season. “I set out to represent something light, fresh and simple while maintaining strong flavours,” says Cutler. “I use fresh local peas and Saskatchewan chanterelle mushrooms to really showcase the time of year. And then top it off with an egg that’s been cured in-house.”

And then there’s the guanciale, which is made by local charcuterie producer VDG Salumi. Cutler renders out the fat until the meat is translucent and is both crispy and tender. When added to the dish, its saltiness is the perfect compliment to the sweetness of the peas and the zing of the lemon.

Being that it’s seasonal, the dish won’t be on the menu past October, but rest assured. The canary has spoken and there will be plenty more to look forward to come fall.