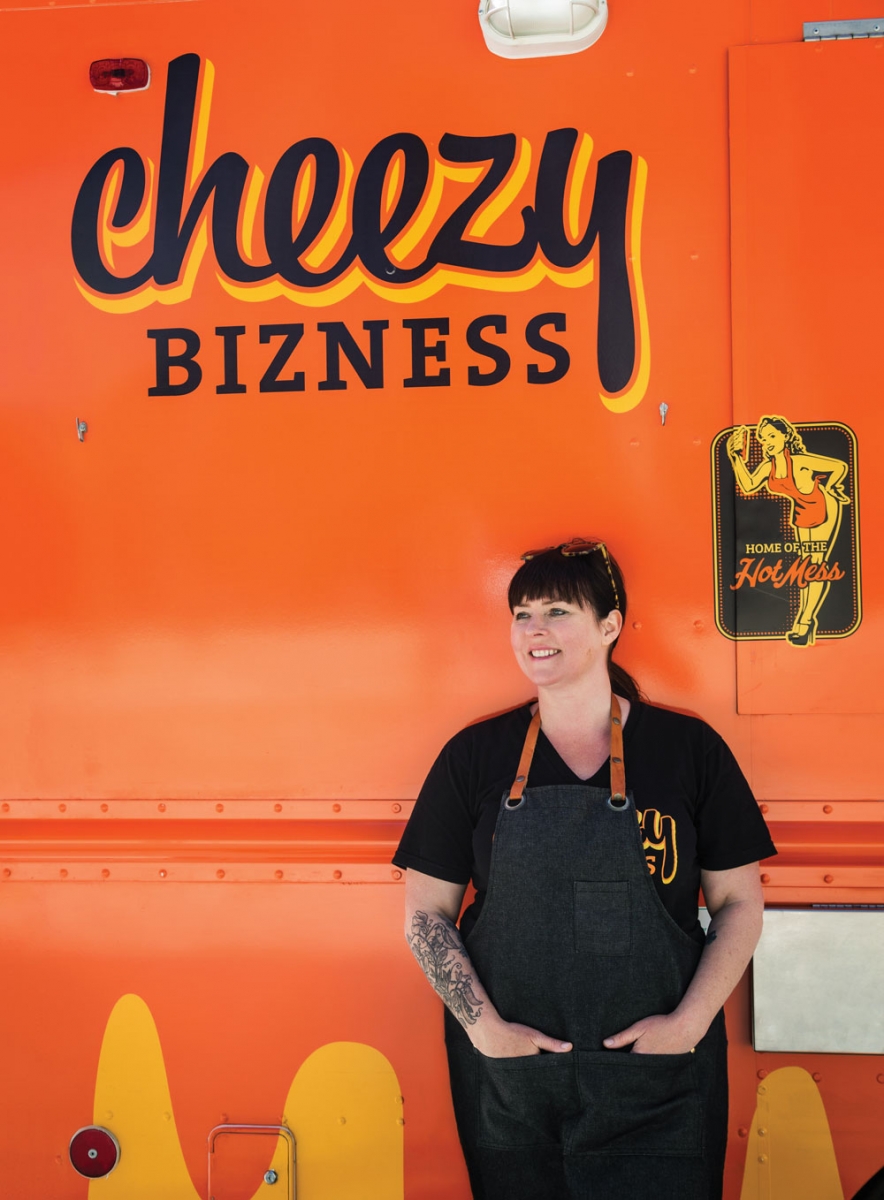 “Once we’re in service, nobody moves,” says Nicole Fewell, the woman behind Cheezy Bizness.

Though she’s referring to the close quarters the food truck crew is sandwiched inside while serving their signature grilled cheeses, she may as well be talking about the eager crowds that form around the giant orange vehicle. “People stand for half an hour and then wait another 15 minutes to get their sandwich,” says Fewell. “They don’t seem to mind, which is pretty awesome.”

Fewell, who moved from British Columbia to Calgary in 1999, came to know the food scene working in a number of local establishments, including the Concorde and the Barley Mill, before becoming a flight attendant with WestJet. She quit her high-flying job to become a full-time mother when her son was born, something she did until he was in the first grade. It was during those years that she decided to return to the food industry, albeit in a more mobile fashion.

“The food truck lifestyle is something that I chose,” says Fewell. “I always wanted a restaurant, but I never wanted the lifestyle of a restaurant because you’re 24/7. This allows me to pick up my son from school at a reasonable hour, have dinner with my family and have weekends free if I want them.”

Launched in May 2012, Fewell quickly found Cheezy Bizness was a seasonal occupation, leaving her a lot of free time during the colder months. When a friend introduced her to a brand of tonic from the States that “blew her mind,” she decided to make her own after searching in vain for something similar in the city.

After a lot of experimenting, she started selling Porter’s Tonics locally in 2013. Named for her 10-year-old son (who drinks it with soda water), the side project has since expanded to three flavours and can be found in restaurants and markets around the city and in Chop restaurants nationally.

A common trait both the tonic and truck share is a focus on using all-natural ingredients, something Fewell swears by. “My food philosophy for my truck is the same as in my house,” she explains. “It’s the way I eat, and it’s the way I want to serve people who eat my food.”

When she wrote her business plan, Fewell’s goal was to make food people would crave and seek out. Though her sales prove she has succeeded, she’s not one for resting on her laurels; she’s currently working on new types of sandwiches, salads, a hot sauce, and she’s even considering making her own gin. Though she’s tight-lipped about her future plans, if her track record is any indication, she’s got a lot more brewing than just a gin recipe.

The Buckskin Sour at The Nash. I also like the Chamomile Sour at Raw Bar.

Taleggio, Saint Agur, Comt … but really, I like all cheese.

Right now, I have a special called “You Goat to Have It.” I make my own goat ricotta with an olive and fig tapenade, and then put that with cheddar and Gruyre.