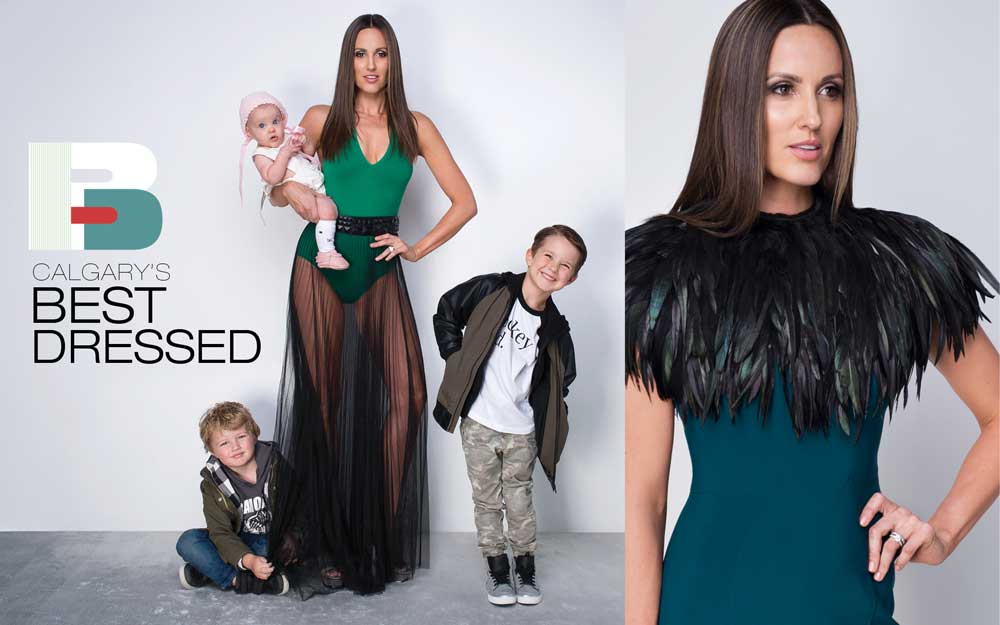 (On Archer, standing) T-shirt from Ford & Harper; jacket from Joe Fresh; hoody from H&M; pants from Zara; shoes from Gap.

(On Jones, seated) Jacket and jeans from Zara; shirt and tank top from H&M; shoes from Gap.

(On Rousseau) Romper from Culla Clothing; socks from Hubble and Duke; moccasins from Freshly Picked; bonnet was hand-knit by Rousseau’s great-grandmother, Mary O’Neil.

Jade Davis may be spending less time walking down fashion runways now that she’s a mother of three, but she still dresses like the model she is. “The grocery aisles are my runway now,” Davis says.

She’ll wear a studded leather biker jacket – the same one she’s had since she was 19 – distressed jeans and perfectly beat-up motorcycle boots to drop her sons (Jones, seated, and Archer) at preschool. And she runs errands in a faux-fur leopard print jacket and bright red lips, with her infant daughter, Rousseau, in tow.

Though Davis continues to model for clients such as Holt Renfrew and Marks, for the past five years her primary job has been mom. With three kids to care for, putting together a stylish outfit can seem secondary, but Davis has maintained her self-described “rock-and-roll glam” look.

Davis says her sense of style is a clear and authentic expression of her identity, but her style choices never get in the way of playing with her kids. “I never want to be a mom that says, ‘don’t touch this,’ ” Davis says. “At the end of the day it is just a piece of clothing.”

“I’m obsessed with a lot of the small businesses in Calgary, like House of Nonie, [pre]shrunk, Paul Hardy, Rubaiyat and Chinook Optical.”

Where in Calgary do you go to be seen fashion-wise?

“I live my life and do my thing, but you are seen everywhere you go, so whether it’s a big fundraiser or the grocery aisles you should put in the effort every day to dress like you.”